First grouse of the season from the Grill at the Dorchester 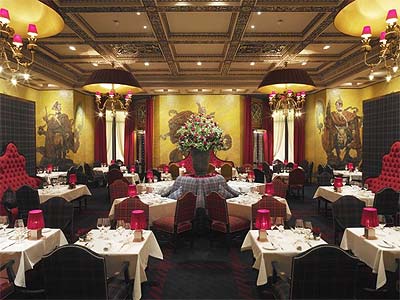 The foodie equivalent of the once-popular Beaujolais Nouveau run, the race to get the first grouse down from the first shoot on the Glorious Twelfth to restaurant tables here in London has become a big deal. Now while we certainly weren’t the first to try grouse in London, we did think it worth while celebrating the first grouse in style, so we were pretty pleased to be asked to the Grill at the Dorchester to try their grouse menu.

Head chef Brian Hughson took his first delivery of grouse, from a shoot in Wiltshire, the night before, when they were still warm. He serves his grouse up one of two ways – the traditional roast, served with bread sauce, bacon and roast potatoes and as a grouse pie with fois gras. Naturally Hot Dinners had to try both.

The dining room at The Grill at the Dorchester is about as far from one of those taupe, anodyne restaurants as it’s possible to be. One could almost hear Simon Callow bellowing ‘It’s bloody Brigadoon’ at the tartan swags and huge highlander images on the wall. In other words it’s a pretty much perfect place for a grouse dinner.

After a glass of Gabriel Pagin champagne – a lovely tipple which managed to be both biscuity and light, we began with two seafood starters – a ballotine of lobster served with a scoop of pea puree on top and tomato water, and dressed crab served with crab rolls, squid cake and cox apple jelly. The lobster was sweet and refreshing with the tomato water being an intense accompaniment, but the dressed crab won the toss because of those delicious, warm crab rolls. These were accompanied with a glass of Wente Valley chardonnay.

Then came the grouse. The traditional option gets the prize for the dish with the most flouncing around – and we’re all for a bit of show when it comes to a good dinner out. This came on a side trolley. We asked for it to be served off the bone, which required our waitress to delicately take it off the carcasse and arrange it beautifully on the plate with a generous scoop of gorgeous bread sauce, lots of crispy bacon and roasting juices poured over the grouse. There was also a basket of game chips and a slab of liver toast. It was really, really good. The kind of dish you don’t want to share, and once finished almost want to call the waitress back to order another bird (but at £60 a pop, perhaps not!).

The other half of Hot Dinners called first dibs on the grouse pie the minute he spotted it on the menu. And he was quietly smug when it arrived – all buttery pastry stuffed with grouse breast and fois gras, served with girolles and the kind of mash that would make your arteries clog up simply by looking at it. Heaven on a plate in other words.

The Grill at the Dorchester

Where is it?
Dorchester Hotel, 53 Park Lane, London W1K

What should I order?
The grouse, naturally. And if you’re here for lunch, Brian is putting trout on the lunch menu, as it’s the start of the trout season too.

Our sommelier picked a bottle of 2005 Saint Damien Gigondas to accompany the grouse – which is one of the nicest bottle of Gigondas we’ve ever enjoyed – plenty of fruit but utterly smooth and a great pairing for our birds.

Desserts seemed a bit of a major indulgence at this point, so of course we went for them. One of us chose a chocolate millefeuille, the other went for the ‘conversation of chocolate’ which turned out to be chocolate fondant, chocolate mousse in tube topped with chocolate jelly, chocolate crumbl, chocolate tuille and caramelised white chocolate ice-cream. Pretty standard low-cal stuff then. Both were suitably pretty and tasty, but couldn’t quite beat our wonderful main courses.

As our first trip to The Dorchester in a while (we’ve tried China Tang but haven’t yet been to Alain Ducasse) this was a real eye-opener. Service was really friendly and the dining room was bustling and cheery, with none of that hushed reverence you might find in other haute hotel restaurants.

Apparently they do a stonking Sunday Lunch. We’ll be back. 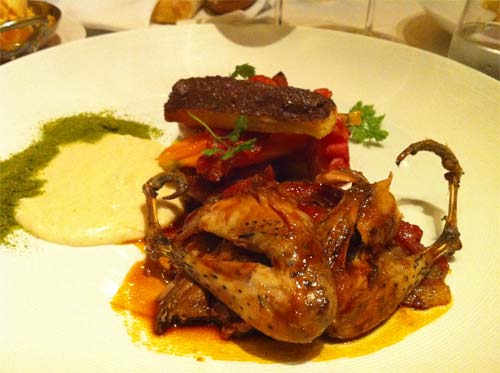 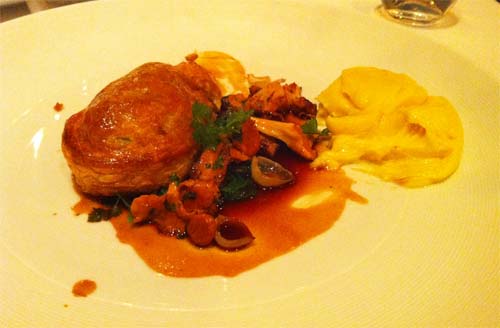 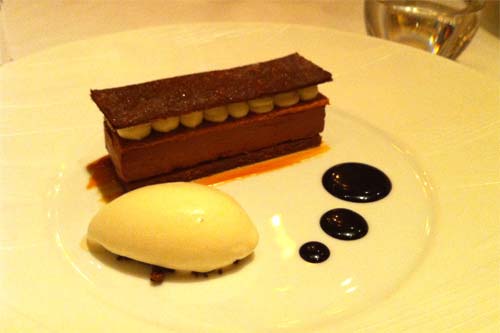 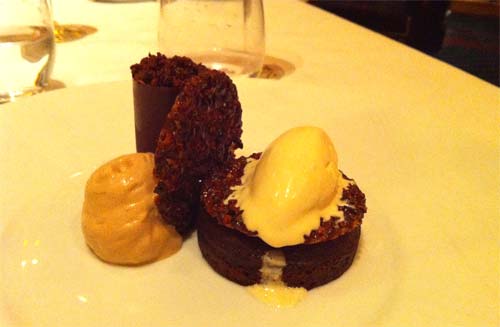