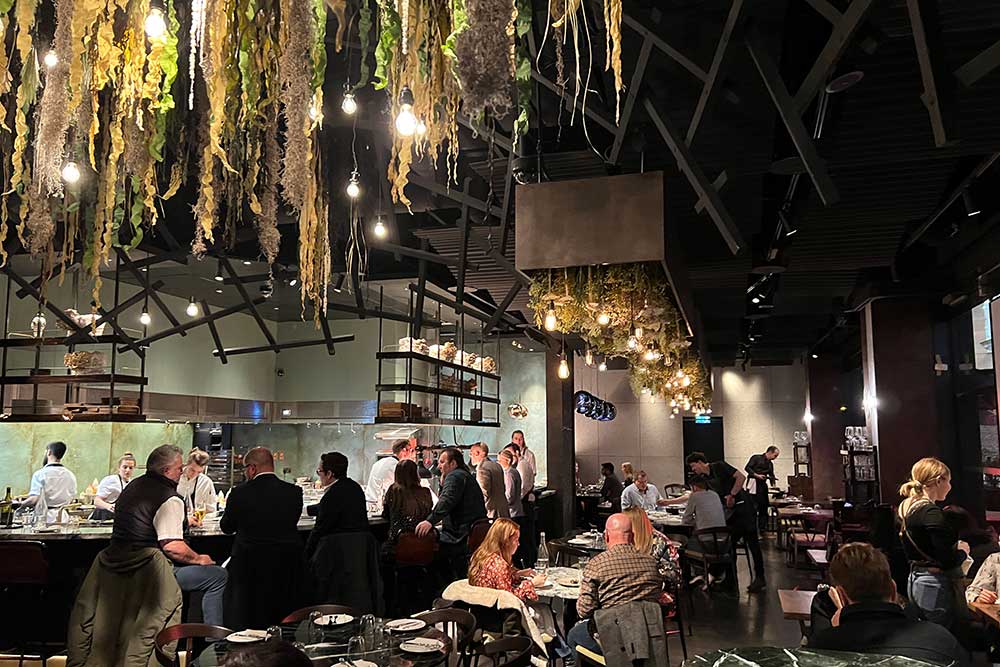 The buzzy new dining room at Fallow in St James.

Hold on, haven't you already done a Test Drive of Fallow?

We have, but that was back when they'd just started their residency at 10 Heddon Street. That was only supposed to last 12 weeks but, due to lockdowns and their general popularity it went on for eighteen months. Now that they've found a permanent home it seemed a good time to return and see what was new.

Where are they now?

You'll find them on the corner of St James's Market and Haymarket, taking over the spot where Duck & Waffle used to be. The new space has a nice covered terrace outside and the nearest tube is Piccadilly.

In their new home, there's been room to extend their bar offering with a separate bar as you come in. Expertly-made cocktails come fast and fresh. So don't mess around meeting somewhere else for a drink first, come here. 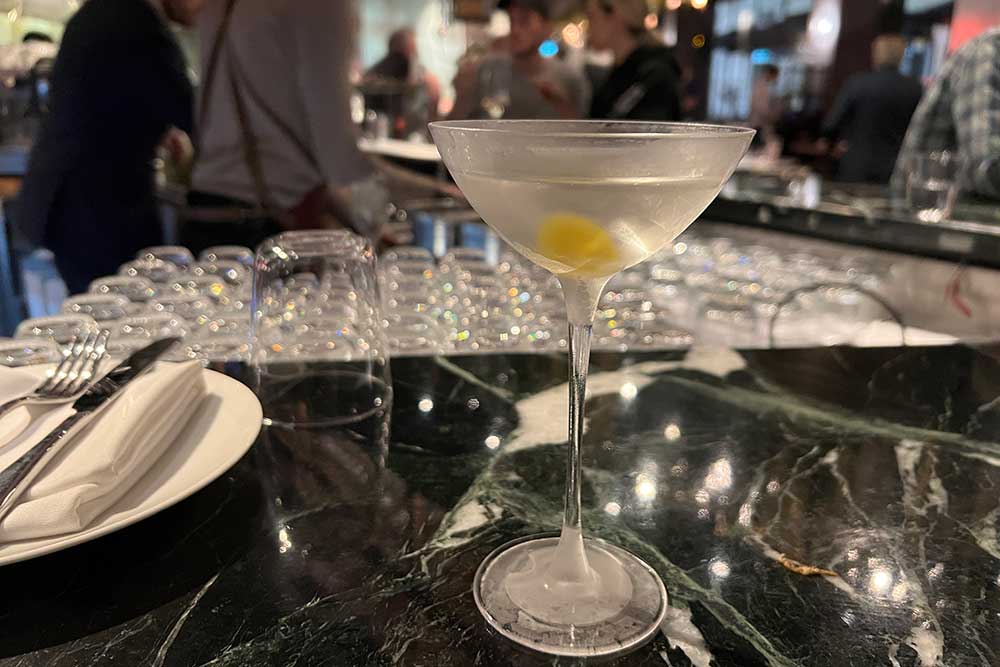 The early iteration of the cocktail list includes a frozen margarita, London negroni, Seventy Five and an Expresso Martini. It also has the loveliest looking martini glassware so we felt honour bound to order one of those.

There are around 10 seats up at the kitchen counter if you like watching the chefs at work. Otherwise, you can graze on dishes at the bar or head into the main dining room. If you're a group - there looks to be a handy larger table tucked in around the other side of the pass.

Fans of Fallow - and they are legion - will be glad to see some of their old favourites on the menu, such as the corn ribs and deer tartare. The menu divides into snacks, small and large plates along with sections for the raw bar, from the grill and the dairy cow cuts that made Fallow's name.

That said, there's a lot of new dishes on the menu too - as well as new takes on signature ones. Here's what we had to give you a flavour: 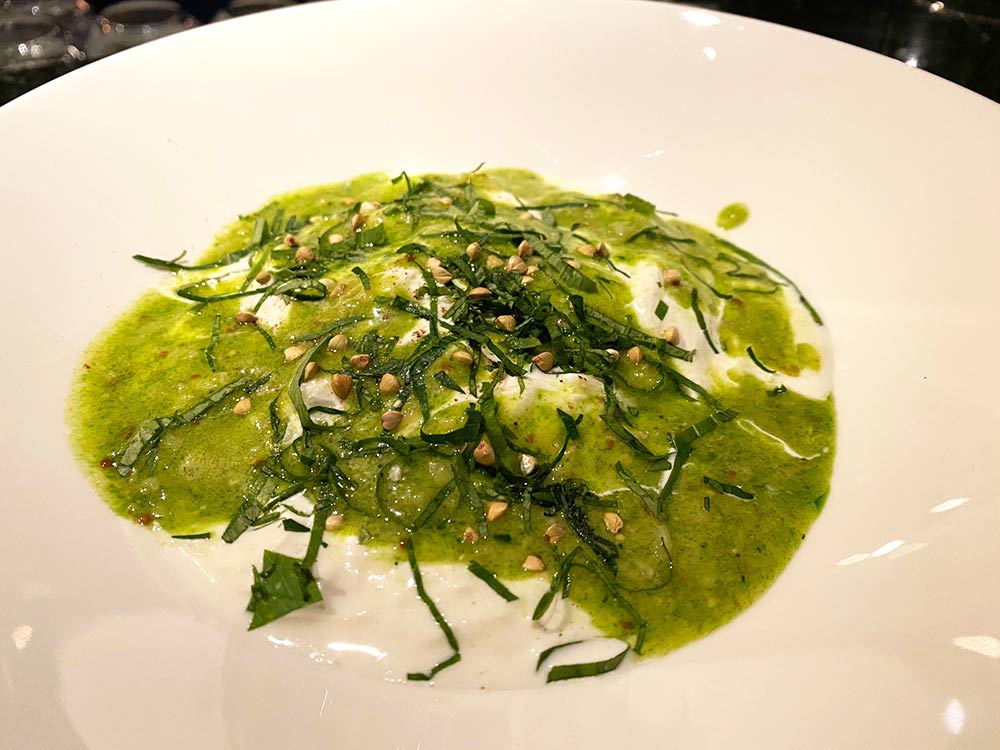 Stracciatella with lovage (£7) - such a good combo and you'll want some of their lovely rye loaf to scoop this up with. 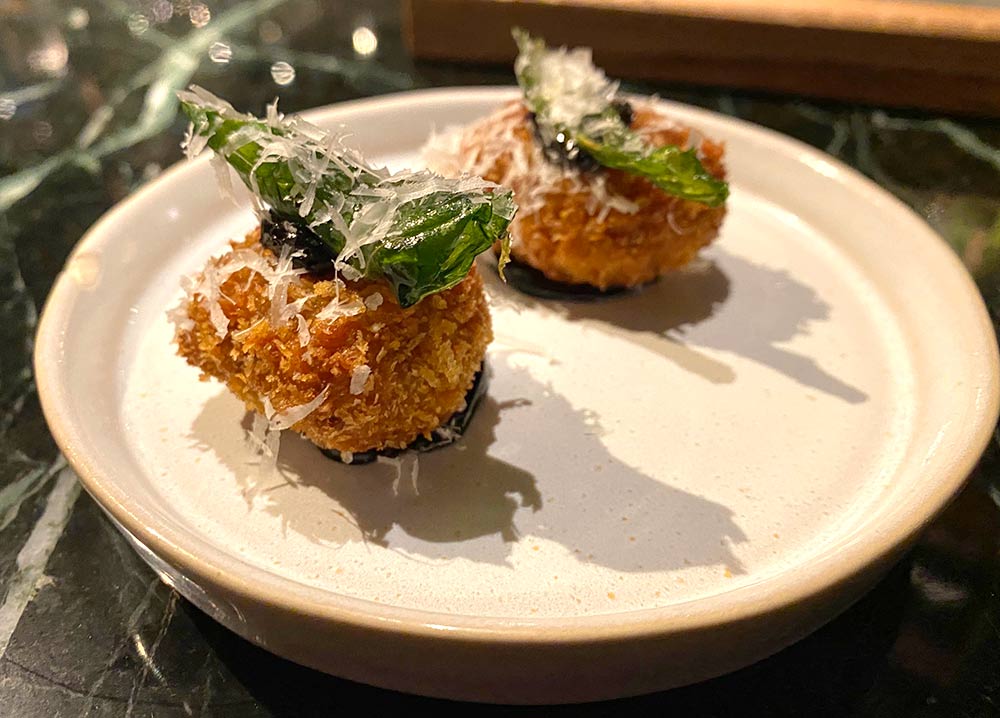 Caramelised cauliflower croquetas (£6) - light as a feather and one of a number of great snack options at the new look Fallow. 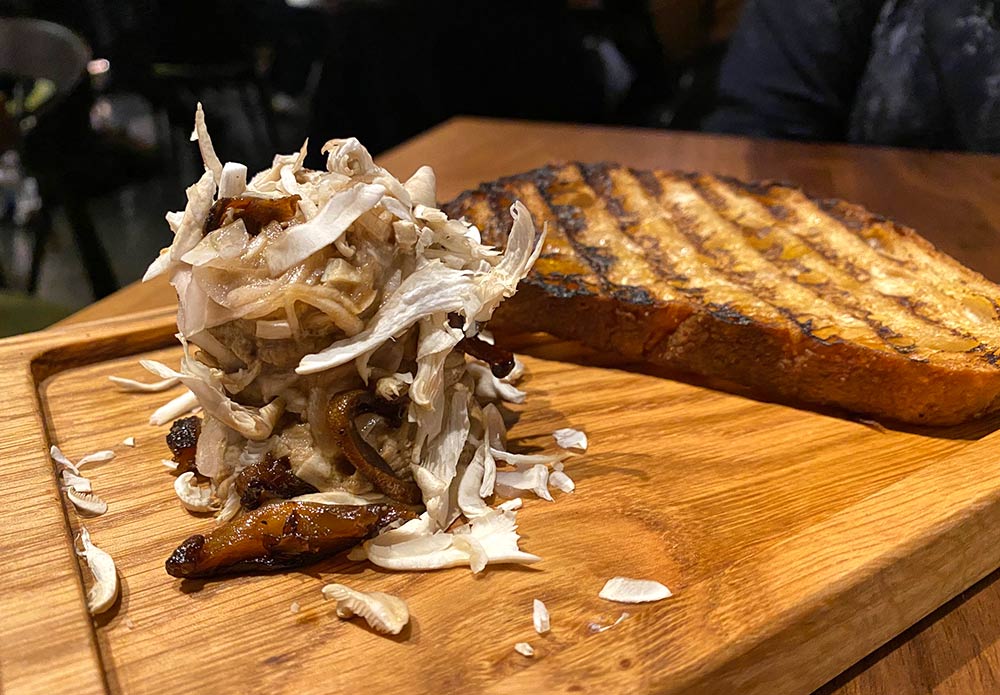 Mushroom parfait (£14) - we'd had this as one of our standout dishes from our first visit to Fallow. Here it's back on the menu, but this time featuring mushrooms grown in the restaurant itself. Just look at the mushroom wall in front of the kitchen to see what's being used today. 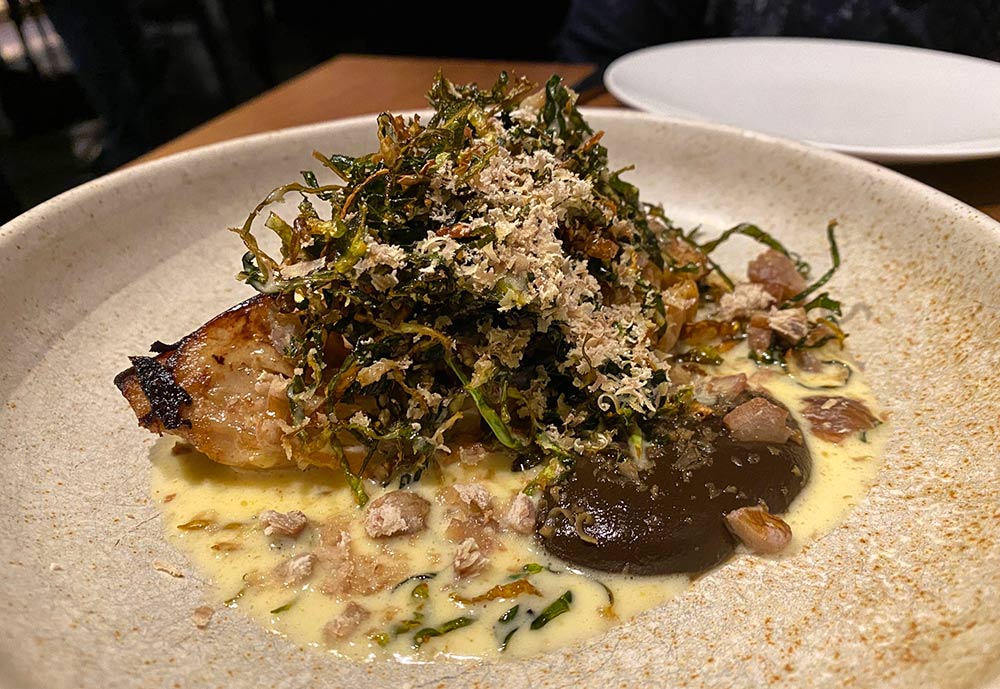 Confit cabbage, black garlic, chestnut (£12) - we'd been recommended this dish by Instagrammer Emma Louise Pudge and can attest to it being a must-order for its almost fudge-like quality. 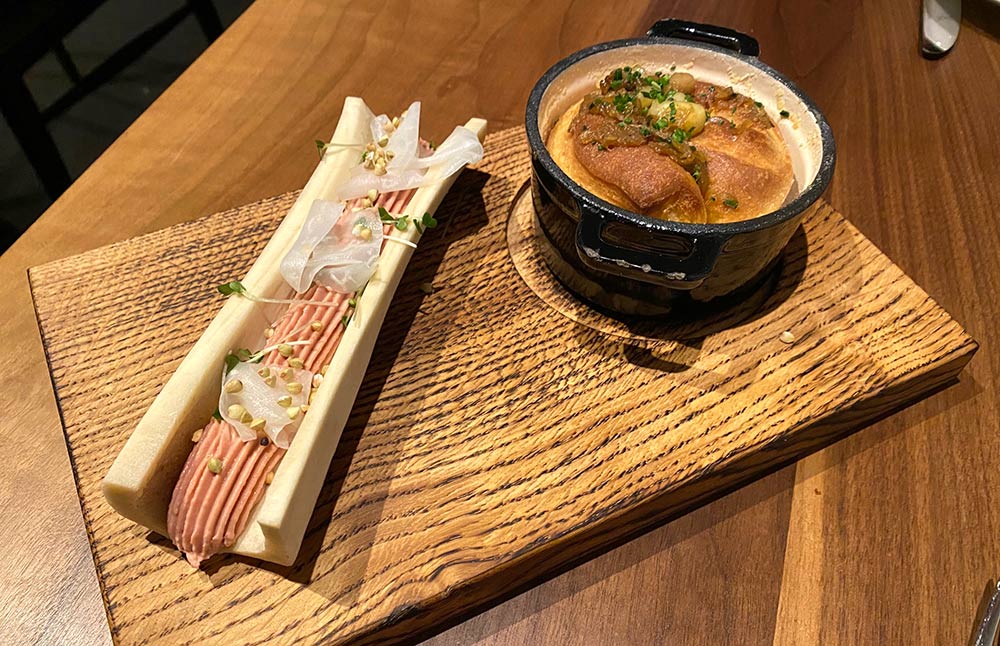 Whipped salmon belly, marrowbone brioche, chives (£16) - is it surf, is it turf? It's a heavenly match of both with fatty salmon whipped into a mousse and served with an intensely meaty brioche. 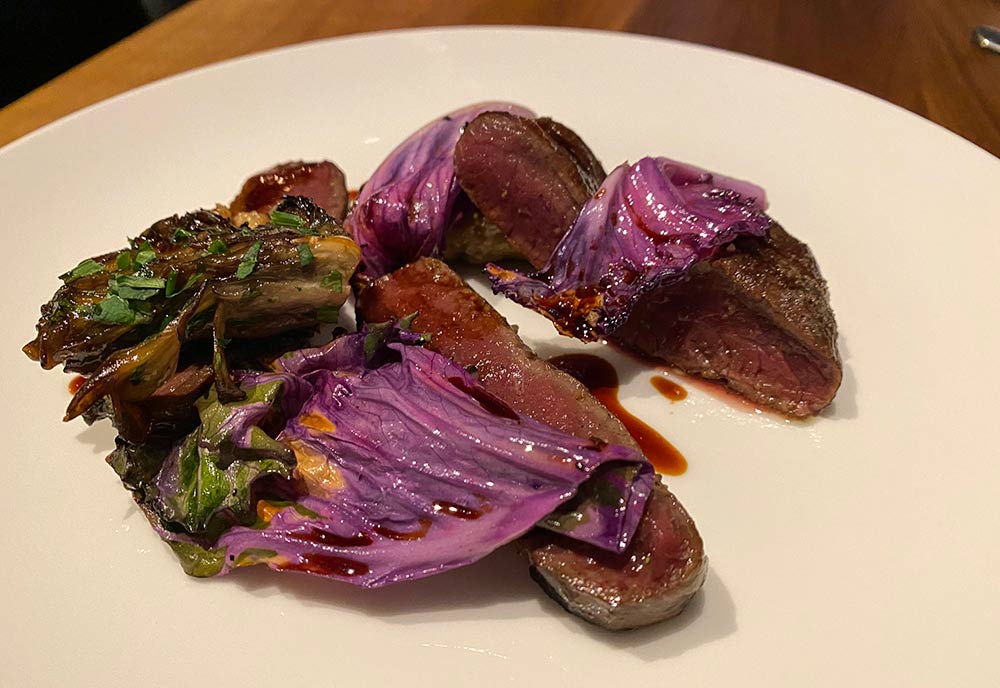 Venison, hen of the wood, kalibos (£30) - ordered from the grill section (on which there are plenty of steak cuts) this was perfectly tender venison.

Anything else we should know about?

Yes, there's an enticing selection of sides including kombu fries and smoked gem lettuce with green goddess dressing, but do not miss ordering these potatoes... 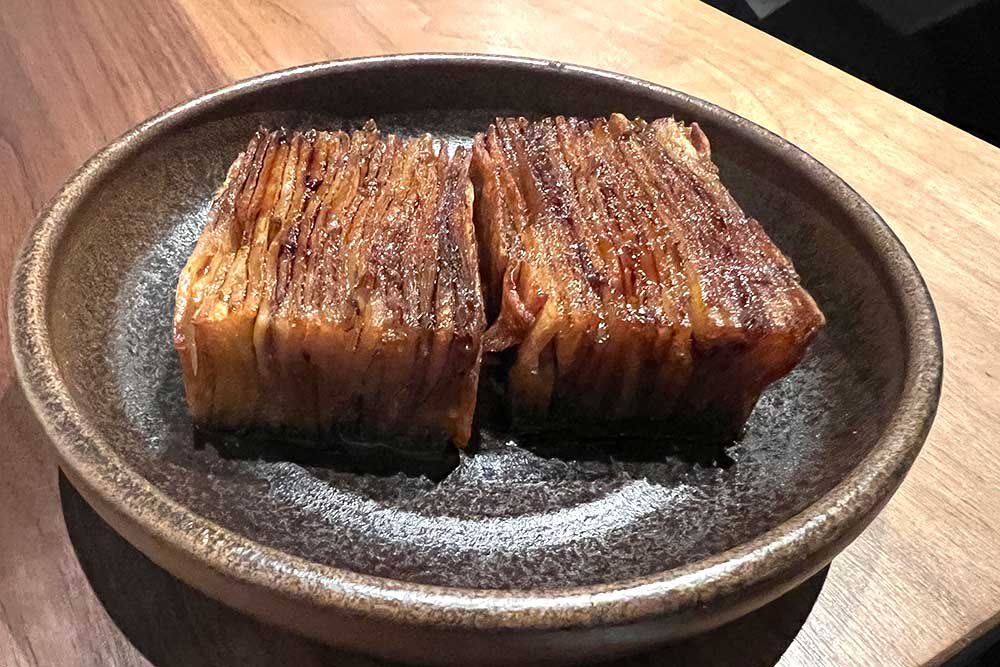 Boulangère potatoes (£6.50) if you're wondering what makes them different to confit, they are pressed and layered while being braised in stock.

There better be because joining the team here is chef Anna Williams who was previously Head Pastry Chef at Dinner by Heston. In addition to her new roster of seasonal soft serves, the dish you very much want to order is this... 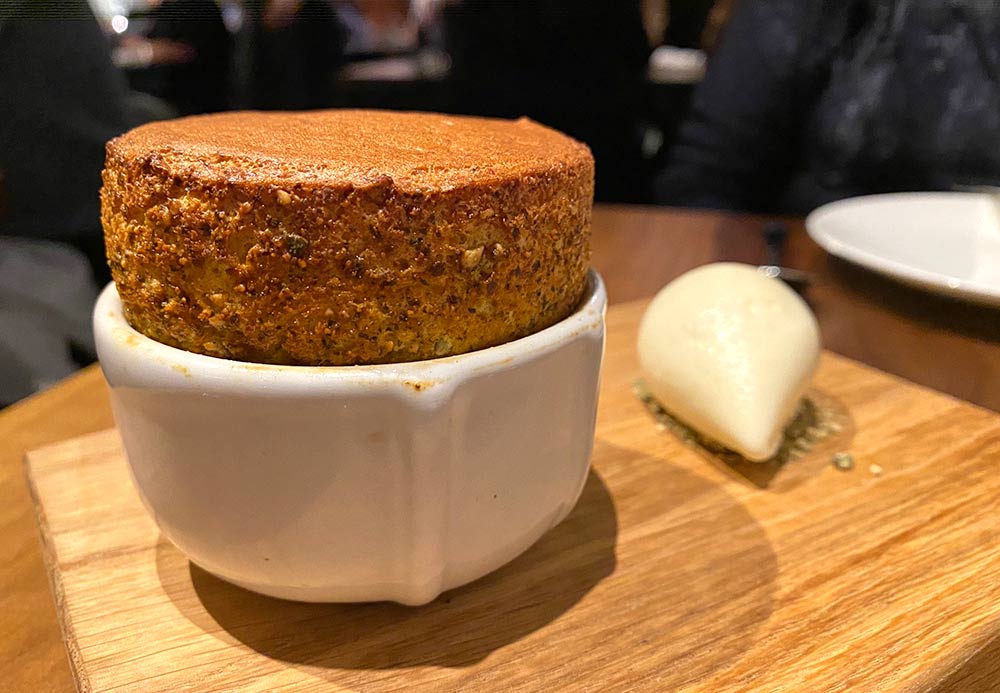 To help curate the list here, Fallow have roped in the services of sommelier and fellow restaurateur Kelvin McCabe from Hackney Coterie. There's an entry-level Fallow white and red at £32 a bottle on the exclusively European list with half the list falling into the sub-£70 range although you could go all the way up to £800 for a magnum of Tignanello. Our mix of Malagouzia and Assyrtiko (£45) was a real floral treat.

There's a lot of love for Fallow - and we know Hot Dinners readers are fans, having voted it their favourite new restaurant of last year. With this move, the team have been able to really expand what they do and make their space their own. From weary West End shoppers to the nearby hedge funders of St James we predict this is going to do great business.

Hot Dinners dined as guests of Fallow. Prices are correct at the time of publication.