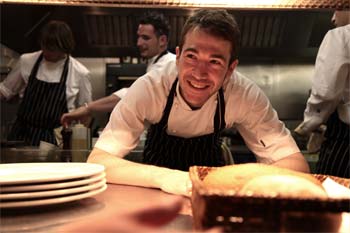 With the notable exception of the Harwood Arms, there isn't much in the way of decent restaurants that would tempt non-residents to head down to Fulham in search of good tuck. But a meal Hot Dinners had at Manson last week made us think that might be about to change.

Manson's owner, Eamonn Manson - who also owns nearby gastropub Sand's End - has been involved in running watering holes in these parts for the best part of two decades. He always had a vision for Manson to be a destination restaurant, as evidenced by his choice of previous head chef Gemma Tuley who had been a protegee of Gordon Ramsay at Royal Hospital Road. Tuley left this summer and Manson was introduced to Alan Stewart, the new man in charge of kitchens.

Stewart was formerly Head Chef at Launceston Place under Tristan Welch and was eager to get his hands on his own restaurant to show what he could do.

Our dinner there, at the restaurant's invitation, was for the restaurant to showcase Stewart's Autumn dishes with wine pairings by the chef's friend Mickey Narea who was the sommelier at Launceston Place. On the one hand, we just want to tell you straight out that it was all bloody marvellous and if you've any sense you should hotfoot it down to Fulham Broadway right now. But if you need persuading, read on.

Our first course was a reworking of a venison tartare, a favourite dish from Launceston Place which was mixed with shallots and beetroot from the restaurant's allotment and served up with celeriac puree, pickled girolles and shaved Kentish cobnuts. It was a real showstopper and to be honest, our favourite dish of the evening. Mickey paired this  with a 2008 Little Yerring Pinoir Noir - a light cool climate pinot noir from Victoria. This dish alone is reason to come here.

The tartare was followed by a brilliantly executed dish of red leg partridge roasted in honey with a terrine of leg meat served with quince and toasted pinhead oatmeal. The honey was picked up beautifully by a fruity, honeyed 2008 Limousin Reserva, Marques de Riscal from Rueda Spain.

Next we had grouse served on a toasted triangle of treacle loaf spread with grouse pate with picked damsons on the side which was accompanied with a  2009 Coteaux du Layon, Domaine du Pont de Livier from Southern Italy.

Finally we had one of the best tarte tatins we've ever had the pleasure of devouring - a caramelised, golden sticky joy of a pudding made with Braeburn apples (the chef's secret trick) and served with clove ice cream and a 2009 Coteaux du Layon, Domaine du Pont de Livier - a sweet wine from the Loire valley. Served up on a board for diners to cut and share, this was a dessert to fight tooth and nail for a more-than-your-fair share.

All this is on the menu now at Manson, and we highly recommend a trip down to Fulham to try it out.

Hot Dinners was invited to eat at Manson