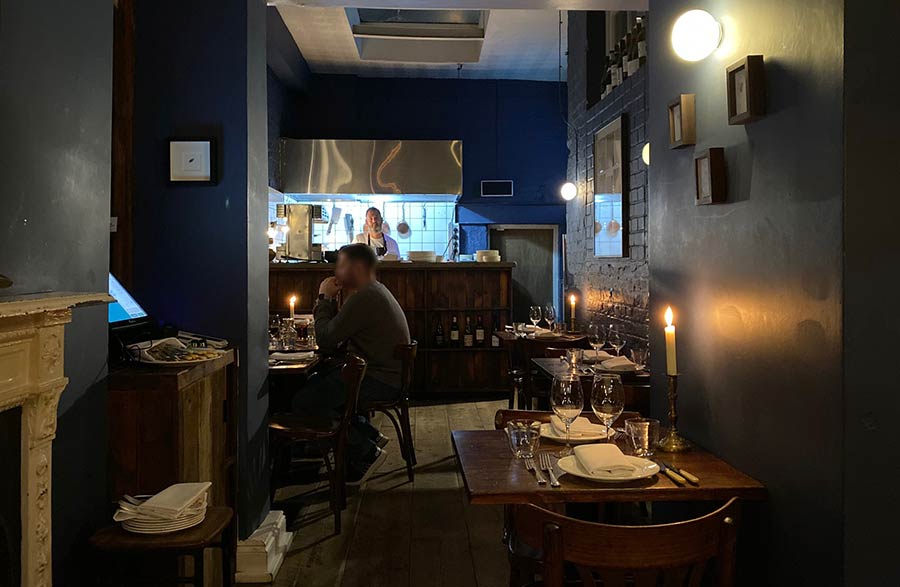 Inside Emile. That's Damian Clisby down the back.

What can you tell us about Emile?

Emile comes from Nick Gibson, best known as landlord of The Drapers Arms, who's teamed up with Damian Clisby, ex Restaurant Director of Petersham Nurseries, for a six-month residency in Shoreditch. They've set out their stall as "simple, seasonal cooking with exceptional wines to match" - so expect a regularly changing menu and an excellent wine list to boot.

They've taken over the Shoreditch site that used to be Rok on Curtain Road. The little section of the road that it's on is surrounded and dwarfed by a new development, The Stage, that's built around the remains of Shakespeare's Curtain Theatre. Surrounde by high rise contruction and cranes, Emile's situation is quite reminiscent of the beginning of Disney's Up: 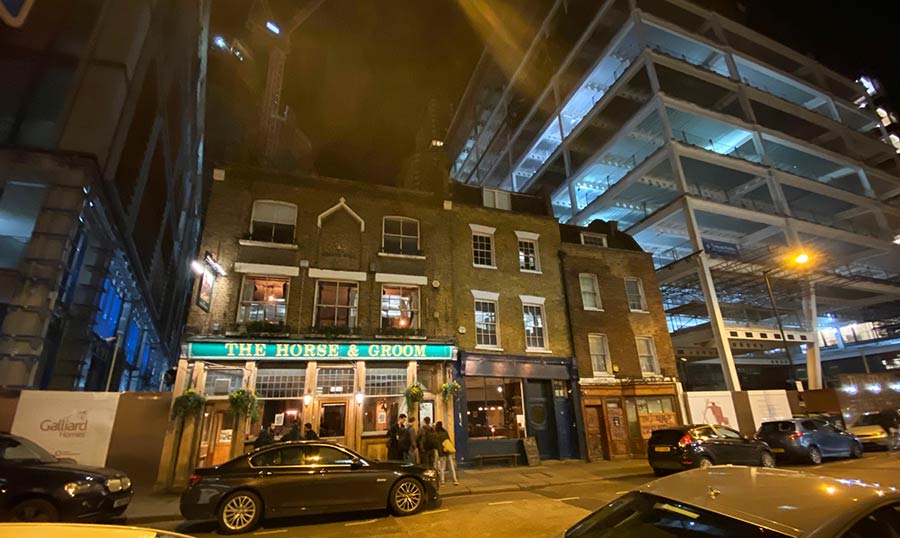 Inside, the restaurant hasn't changed too dramatically from Rok, with an open kitchen housed down the back of the room and a small bar area up the front.

In the immediate area, the most obvious places are the Horse and Groom next door or the Queen of Hoxton down the road. But we think the best bet is a short 5-minute walk around the corner to excellent whisky bar Black Rock. After the meal, given the excellent wine list, we'd say just linger at Emile and work through a little more of the list. It's also worth noting from Friday 1 November they'll be opening until 1am and offering 20% off all wine after 10pm with a snacks menu alongside.

What can we expect from the food?

As mentioned, it's a seasonally changing menu, so expect a few shifts during the course of the residency. But essentially you'll find a menu split into snacks, small and larger plates - although the latter are in the same section on the menu. With that in mind, we'd recommend ordering as you go (as we did) to avoid having too much at once.  We'd also suggest kicking off with some Dusty Knickle sourdough - even if we wished it came with salted butter.

As for what we had on the night... 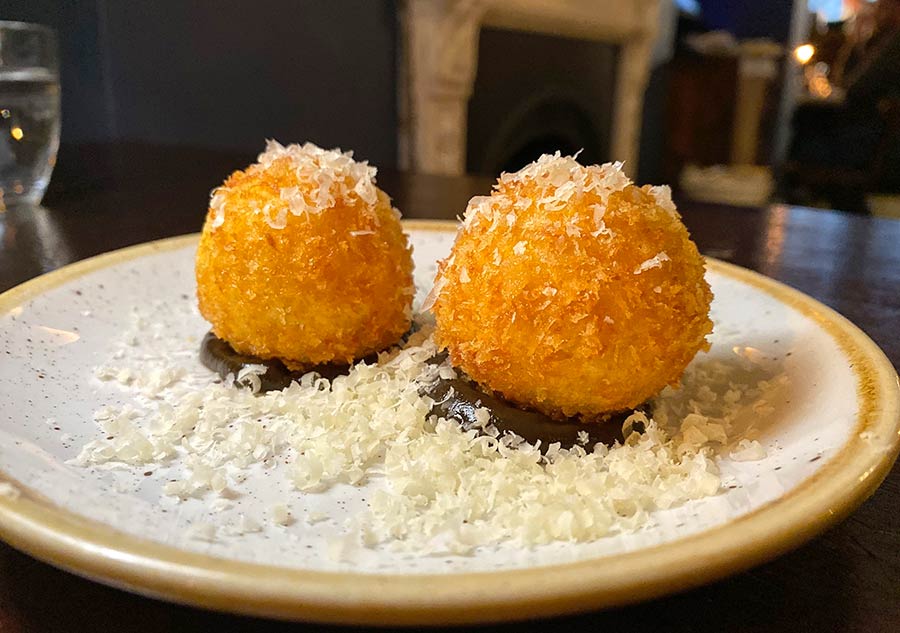 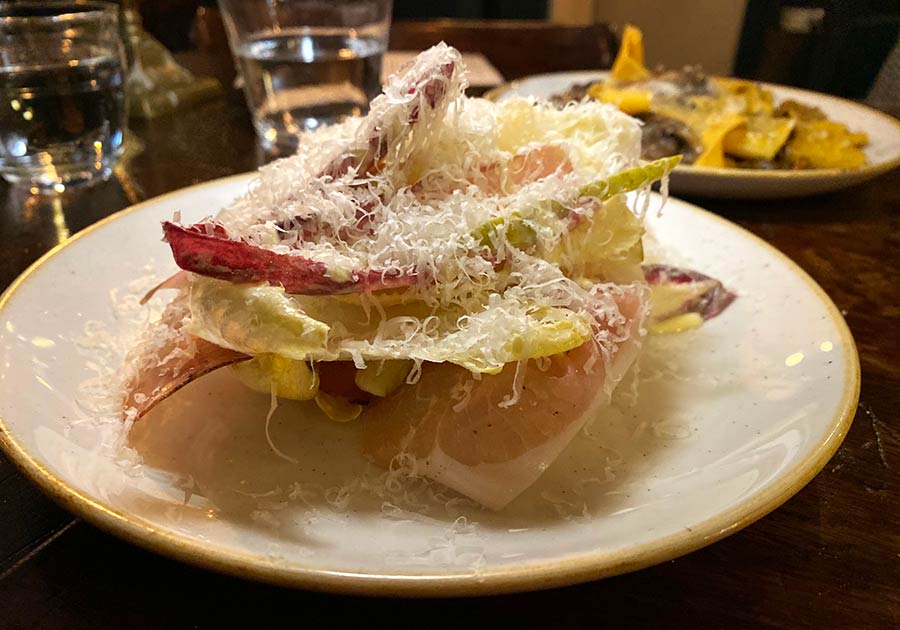 Pear, Pecorino, chicory & speck salad (£12) - a simple winter salad, yet hugely effective, the pear served at the perfect ripeness too. 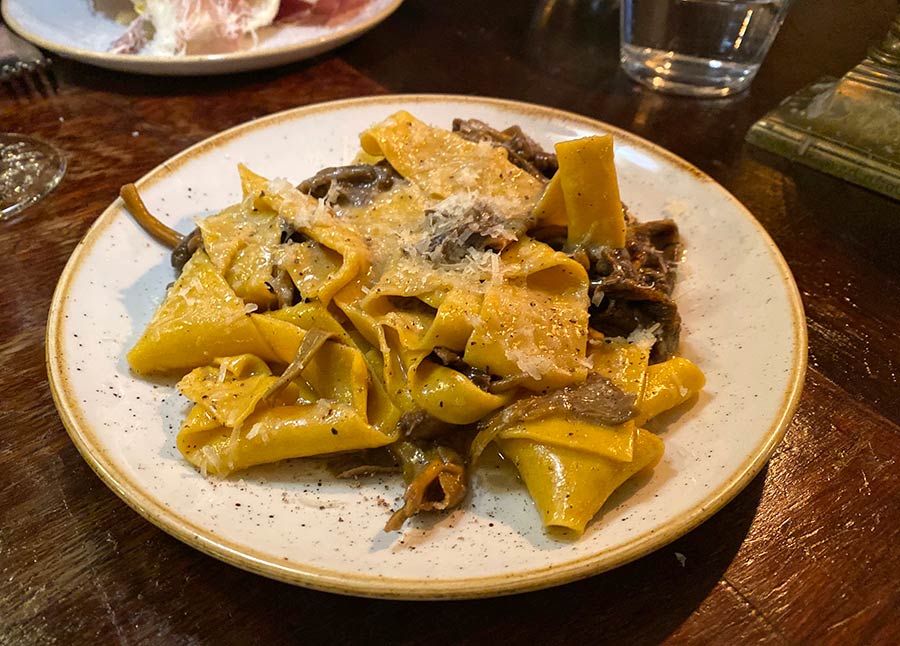 Pappardelle, chanterelle mushrooms (£15) - there's a lot of pasta in London at the mo, but this competes with the best of them. 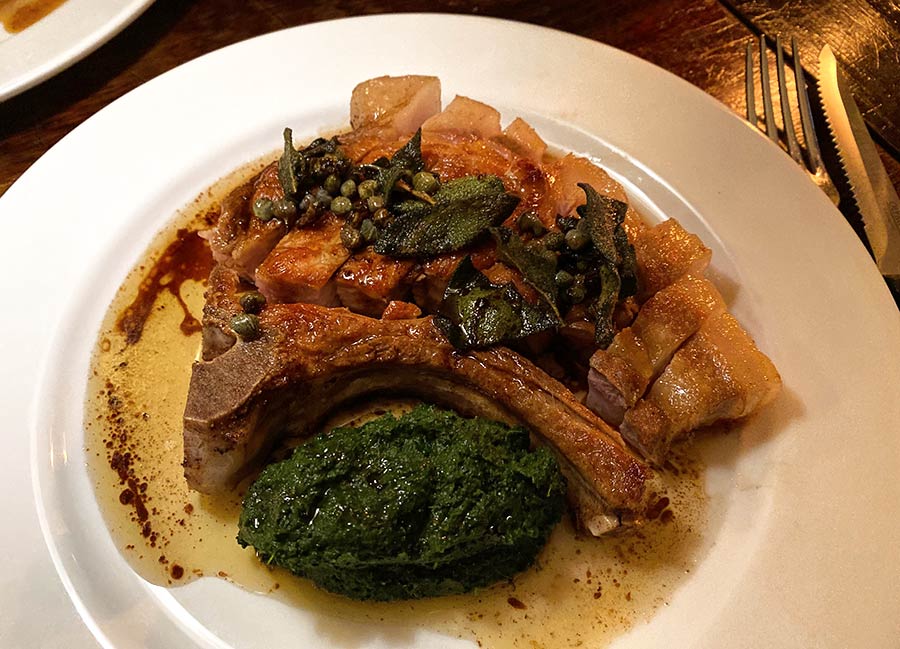 Paddock Farm pork chop, Cavolo Nero, capers & sage (£23) - one of the best chops we've had in a while. Perfectly seasoned and the crisp sage is a great companion to the meat. 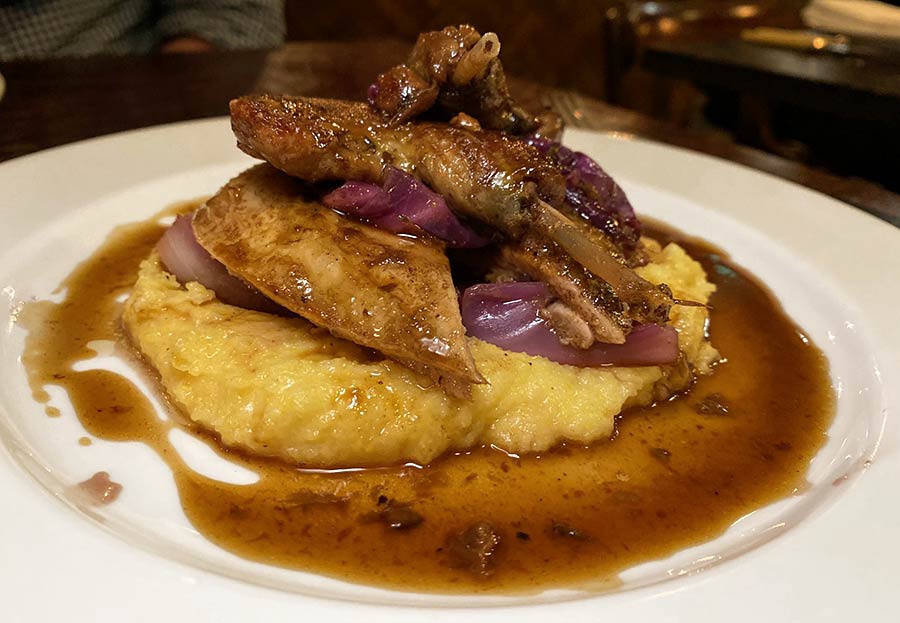 Red leg partridge, polenta, Kalibos cabbage & thyme (£24) on a load of lovely polenta - a warming autumnal dish, like a hug on a plate.

And how is the menu for vegetarians?

The pasta and the croquettes above, would work for sure, and there was a beetroot salad with smoked almonds and pomegranate (£10) on the menu when we arrived too. Some of the veg-led small plates can also be upsized as needed.

Given the excellent wine list, we think a short stop before dessert to share a cheese course is highly recommended... 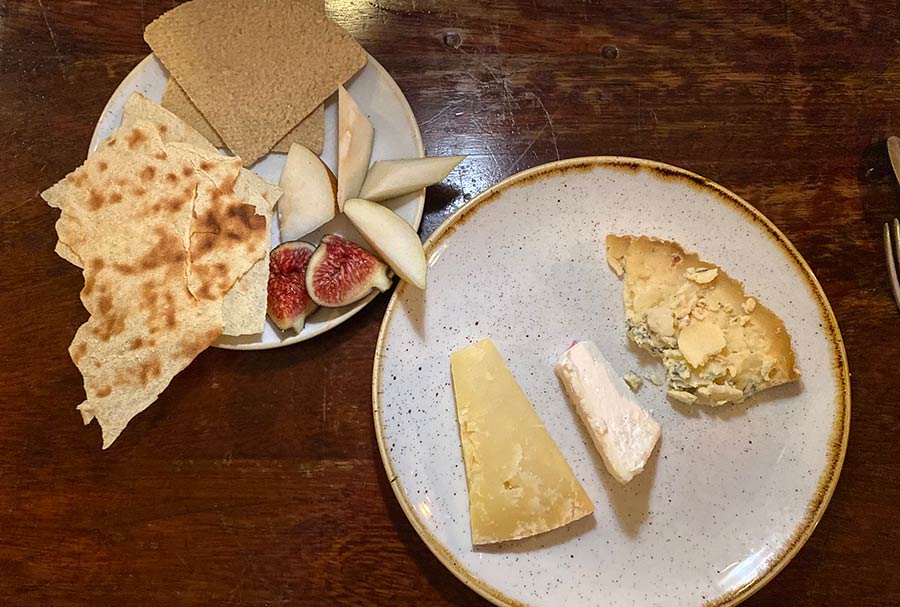 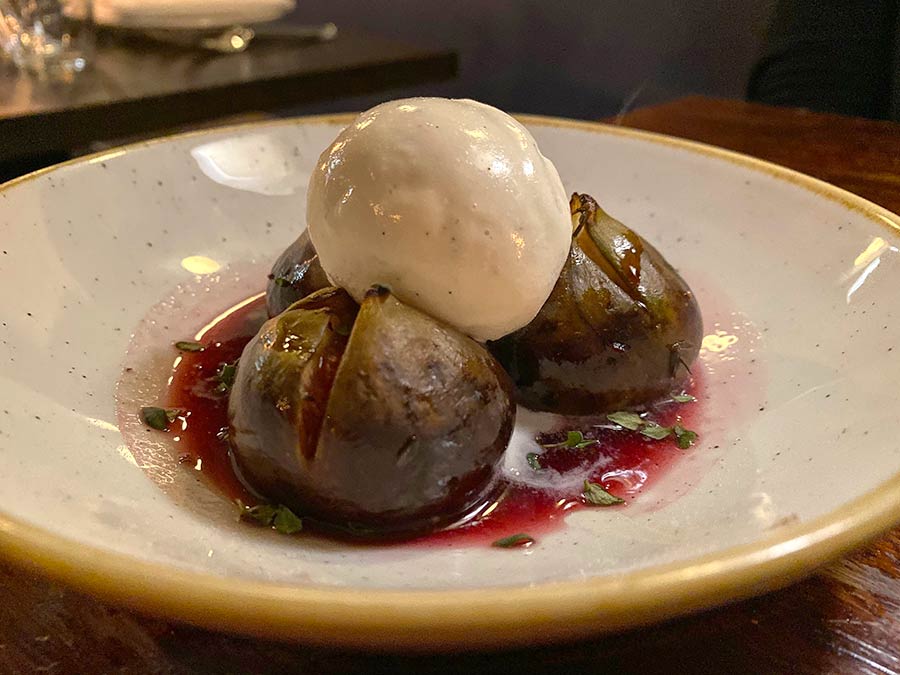 And onto that wine list - what can you tell us about that?

The wine list is almost exclusively from Spain, France and Italy - as well as there being a few one-offs and specials. Why not kick off with a glass of Cremant and then let Nick guide you through it? There's one bottle at the £25 mark, otherwise you're mainly in the £30-£40 territory. If you're in the mind to go large, there's currently a 2015 Mersault on the list for £105, or an Ornellaia Bolgheri 2011 for £180.

Anything else to watch for?

Their Sunday lunch, aka the Sunday Series, certainly looks worth trying. That's one sitting only, with the view of getting everyone in at the same time for as convivial a Sunday session as you can get. Each Sunday will focus on something new, including roast goat, "Moroccan style" and "Roast goose" in the run-up to Christmas and more.

Emile is only there for six months, so we think you should rush down as soon as you can to make sure you catch it. Hopefully, they'll find a way to keep the collaboration but for the moment, the food by Damian Clisby and wine chosen by Nick Gibson are a dream match. All than and a cosy room that's perfect for autumn - well worth a look.

How to book: Email Reservations@emilerestaurant.co.uk

Hot Dinners ate as guests of Emile. Prices are correct at the time of writing.