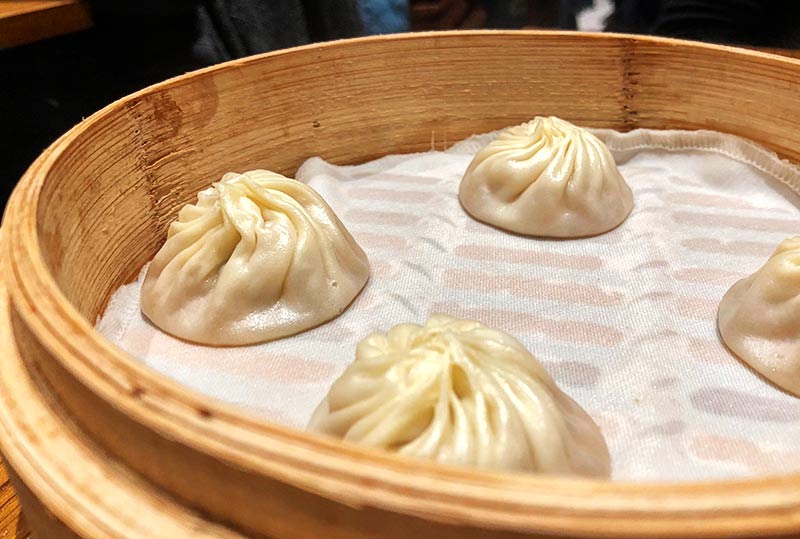 The main event - the pork xiaolongbao (£6.80 for four, £10.50 for eight). On balance they're probably slightly less flavoursome then maybe you'd find elsewhere in London, but they were so fine and beautifully made that they get extra points for that. We actually preferred the crab and pork version more. Note that they are small - each one is bite-size - so you can definitely get away with ordeing quite a few.

So what do we need to know about Din Tai Fung?

Well, that rather depends on you. If you're the kind of London-based foodie who's also travelled widely in South East Asia then not only do you know ALL about DTF, but you've also probably got strong opinions on your favourite branch and dish. If, on the other hand, you haven't done much long haul recently then this may be your first encounter with the popular dumpling chain, and we'll help you with that.

We've been hearing a lot about the dumplings there, they're special, right?

DTF is best known for its xiaolongbao, AKA soup dumplings. And while you can get these all over London (we have a fondness for the ones at Dumplings Legend ourselves) DTF's xiaolongbao are rated for the thinness of their skins, the number of pleats (at least 18) and the sheer consistency of those dumplings wherever you're eating them in the world. 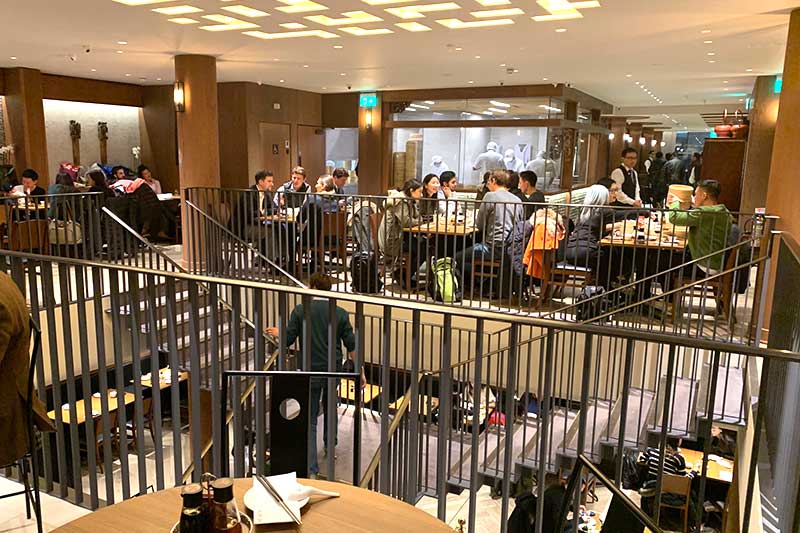 Set across two floors, Din Tai Fung is huge. If you look at the back of this photo you can see the glassed in kitchen where you can watch the chefs actually making the dumplings.

So where's their London restaurant?

They've just opened up on Henrietta Street in Covent Garden. You may have seen something of the epic queues that formed there before Christmas. But they'll also be opening a branch at the new Centre Point development later this year. So that should help with any waiting times.

A street away is the Lady of the Grapes wine bar or there's always the old-style boozer Lamb & Flag around the corner, which is where we ended up for a quick drink afterwards.

The masters in action in the kitchen

So how does the queueing system work?

You turn up, head in the front door and put your name down on the waiting list and then they'll text you when your table's close to being ready which is when you join the actual queue outside. On a cold Tuesday evening in January, the total wait was 45 minutes. But that'll obviously change and you can expect to wait longer at weekends.

Alternatively, you could come inside and wait in their large bar area which also has a bar snacks menu with dishes like spicy fried tofu and Taiwanese crispy battered squid.

First things first - the menu is big. There are pages and pages of appetisers, dumplings, steamed buns, veggie dishes, rice and noodles, sides and snacks and soups. We'd seen some reports of much of this not being on offer in the first few weeks of opening, but almost everything was on when we visited. And while you're clearly not going to want to leave without ordering the xiaolongbao, there's plenty more to try.

If you're not familiar with soup dumplings, then it's well worth looking up the odd "how to eat" guides and videos online - this will really help. There are various teams both pro the idea of sucking out the soup first - as well as those vehemently against the idea. We'll let you decide (buy many and experiment, we say).

Here's what we had (including the dumplings pictured above): 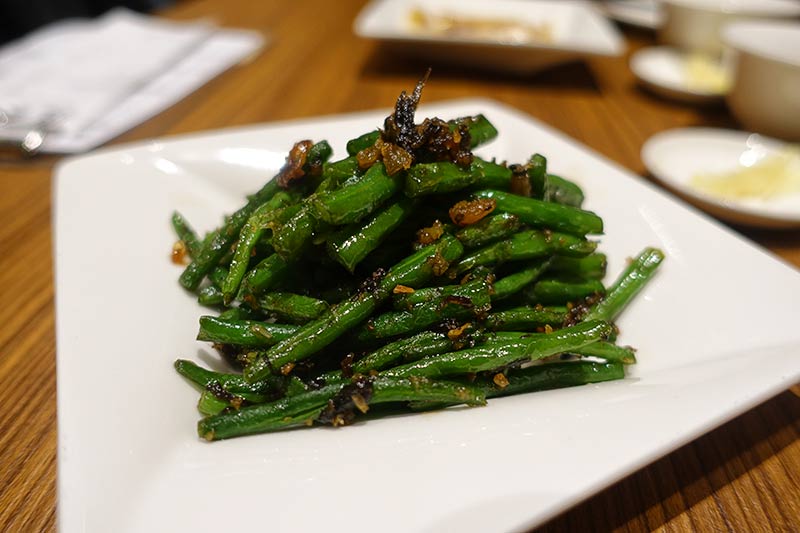 Sauteed string beans with minced pork and dried shrimp (£5) - currently one of the better ways to get one of your five a day that we can think of. 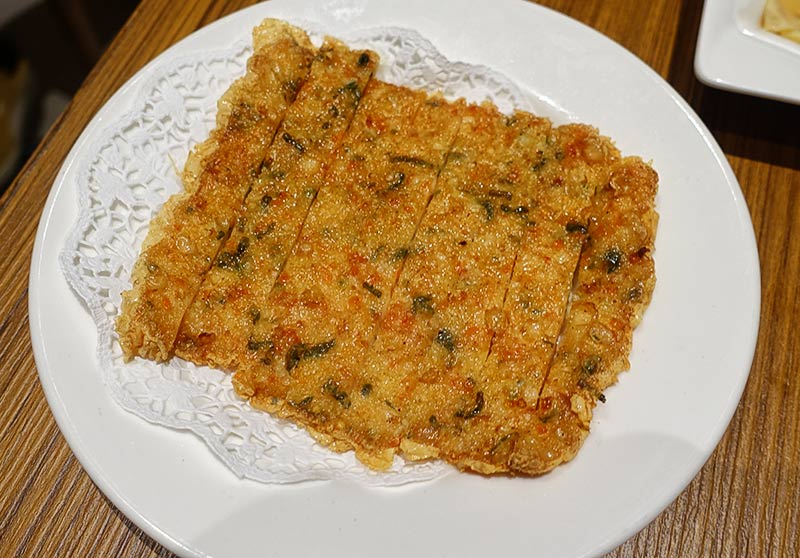 One of our favourite dishes - the crispy golden prawn pancake £9.50. 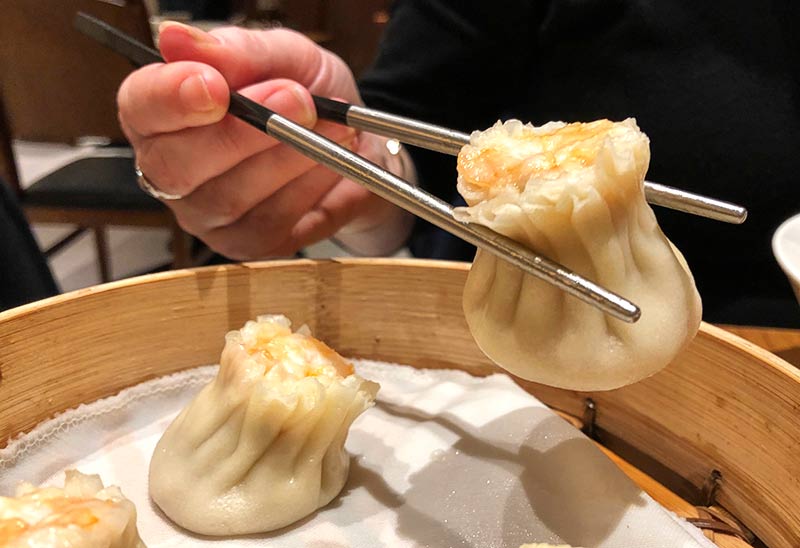 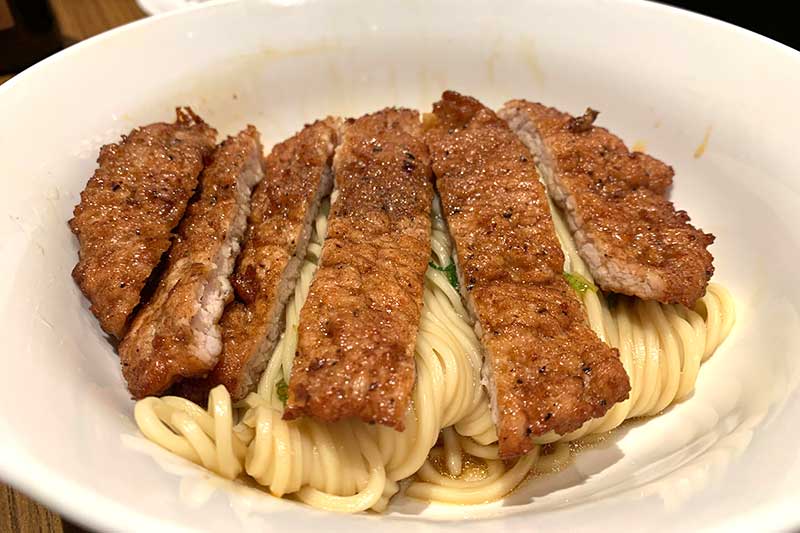 Pork chop with dry noodles in house sauce (£13.50). The pork chop is a signature dish of DTF and was okay, but we loved these sesame flavoured noodles so much we ate every single one - even after all the other food we'd ordered. Strangely comforting. 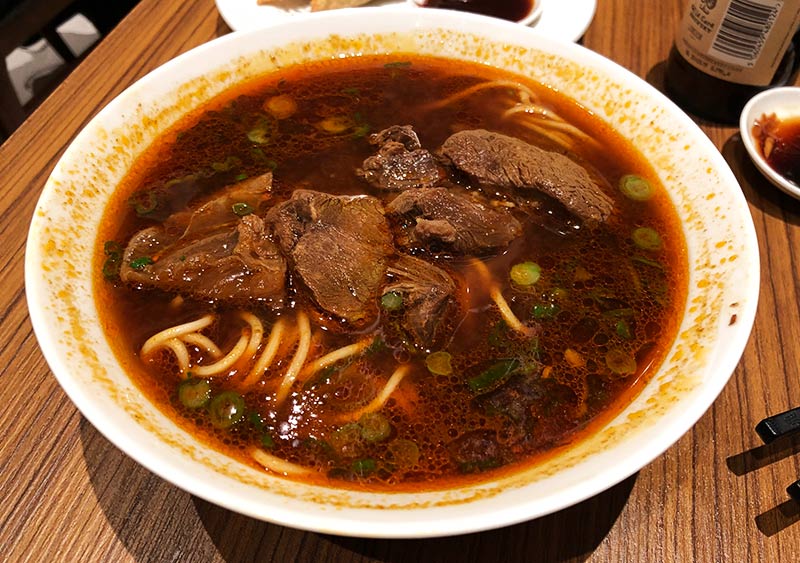 We weren't quite so enamoured with the special noodle soup with braised beef (£13.50) which was a bit on the bland side, though we've heard raves too. The beef portions were very generous though. 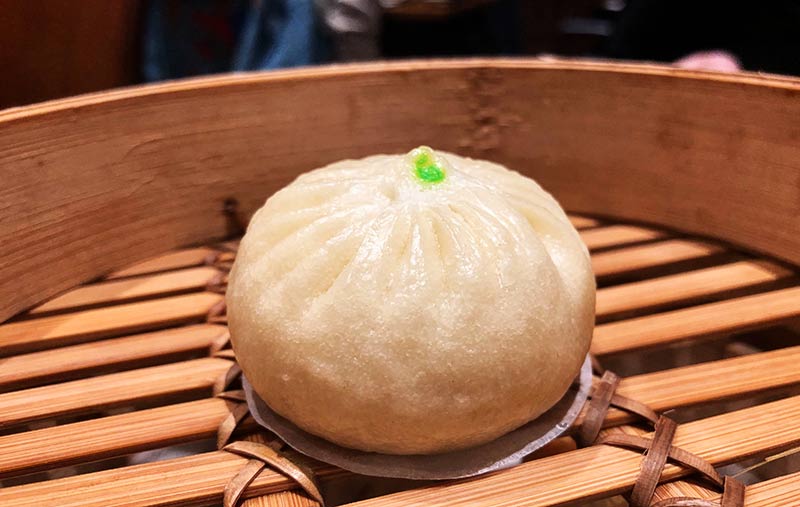 The chicken steamed bun (£3 each) - because we love these larger-scale steamed buns. 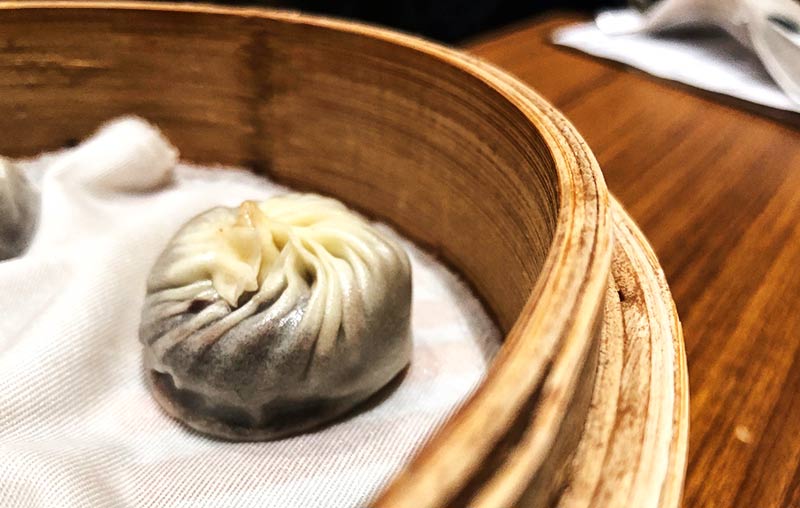 Right now the only dessert on offer is the red bean xiao long bao with chocolate lava (£7 for four). We may have to come back when the salted egg yolk custard lava buns go on sale, which is what we really wanted.

They're better catered for than you might think. From the soup dumplings to the steamed buns and soups, there's a veggie or vegan option in most sections and it's all clearly marked on the menu.

We had one of the cocktails - a punchy number called Five Elements featuring Roku gin baijiu, Akashi Tai Umeshu, house cider reduction with fennel, cinnamo, shiro miso and DTF fice vinegar - £12.50. Otherwise, there are loads of soft drinks to choose from with iced and bubble teas, a short list of wines and three beers (one Scottish, one Taiwanese and one from London).

With all the hype that blew up over Din Tai Fung's arrival in London, it was always going to be hard to meet such sky-high expectations. We honestly didn't know what it was going to be like. By ordering all manner of things on the menu I think we may have ended up having a better experience than others who came expecting the moon. It's fun, bustling and much of what we had was really tasty - and that's just what we were after.

Where is it? 5 Henrietta St, London WC2E 8PT

Hot Dinners dined as guests of the restaurant. Prices correct at time of publication.