[SIGPLUS_EXCEPTION_SOURCE] Image source is expected to be a full URL or a path relative to the image base folder specified in the back-end but /blog/2014/sea-containers/gallery is neither a URL nor a relative path to an existing file or folder.
0
Shares

Designer dining by the Thames - we Test Drive Sea Containers 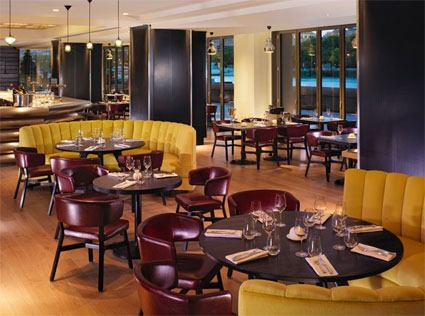 What do we need to know about Sea Containers?

It's the restaurant at the ultra modern Mondrian hotel which has just opened its doors on the South Bank. As befits an American hotel group they've brought in New York chef Seamus Mullen who's working with Executive Chef Luke Rayment. Luke comes here with pretty good hotel restaurant credentials of his own - he was previously Head Chef at Gordon Ramsay at Claridges.

The name should be the clue - it's in the old Sea Containers building on Upper Ground, just a few minutes walk from Blackfriars Station.

The most obvious answer is that a visit here demands a trip to the bar which takes up the rest of the river-frontage ground floor here at the Mondrian. Dandelyan is the latest bar to be opened by bar wunderkind Ryan Chetiyawardana of White Lyan fame. If you can't get a seat in the bar itself, Ryan's also come up with the drinks available at the central bar in Sea Containers. We thought his Spotless Martini made with Mr Lyan gin, vermouth, distilled lemon and distilled olive was pretty special.

With apologies to the late Patrick Swayze, no-one puts Hot Dinners in a corner - or in this case, the back of a large dining room when there are plenty of tables free right by the glass floor to ceiling windows overlooking the river. So try and get a seat here if you can. It looks like there'll be room for outdoor tables here come the summer. Alternatively, if you're here in a group there are some massive banquette tables here which would be great for a crowd. For such a designer hotel we found it a strangely unloveable dining room, but hell the view is great, so that more than compensates.

So what kind of food is it?

They've described it as 'field to table' and if you've read Fay Maschler's early review, you'll know by now that there's no bread (except where it's included in a dish) or any side order of carbs, at least that are on the menu. Instead, expect to see plenty of really interesting vegetable-led dishes.

We began with a plate of salmon crudo served up with fennel & dill yoghurt, golden shallots, fennel pollen (£11) and the charred eggplant with mint labneh, dates, black & white sesame (£7) which were exactly how you'd want to start a meal. Small enough not to ruin your ability to go the full three courses, but packed with flavour.

Crab salad on toast with citrus aioli was tasty but didn't hit the heights of other dishes and frankly we'd leave it out if you'd rather try the larger sharing dish of sobrassada sausage flatbread served with Mahon cheese, onion confiture and hen eggs (£14) which really is worth ordering.

Shaved mushrooms with pine nuts, Idiazábal cheese and brown butter vinaigrette (£10) was an Autumnal triumph, beautifully executed. And the smoked and roasted chicken with charred lemon vinaigrette (£38) was possibly the nicest roast chicken we've had in London this year. And with the amount we've eaten all over town, that really IS a compliment. And do - as you must - order the off-menu mash to go with this.

For dessert, everyone says try the clafoutis and there's a reason why, because our prune and armagnac version with vanilla custard (£6) was a bowl of boozy, ribsticking goodness. By contrast the ice-cream sundae with salted caramel popcorn (£5) felt a little bit like so many other desserts currently being served up in London.

There's no getting around it - the wine list at Sea Containers has got to be one of the priciest we've seen in London for ages. There's nothing under £30 and it shoots up alarmingly fast. That said, what we had was really delicious - a Morgan Double L Vineyard Chardonnay from California - but then it did cost £90.

The food at Sea Container was, looking back at it, some of the most fun and different we've tried in London for a while. But we were surprised that a week or so after opening that a restaurant run by a seasoned hotel group was still, to a large part, finding its feet. That's fine during a soft launch, but prices here are pretty punchy and staff need to be a little more on-the-ball to match the food and that view.

Hot Dinners were invited to eat at Sea Containers. Prices were correct at the time of writing.