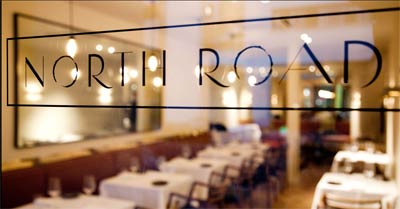 Opening a Danish restaurant in London just now could rightly be considered a stroke of genius.

Not only have the British crowned René Redzepi King of Chefs by voting his Copenhagen restaurant Noma the World's Best Restaurant™, but London's foodies are also big fans of some of Noma's many London-based alumni - namely Ben Greeno of Hackney's Tudor Road supperclub and Viajante's Nuno Mendes.

So when Islington restaurateur Cristoffer Hruskova, whose brasserie Fig had won plenty of local praise, announced he was opening a second restaurant in Clerkenwell which would focus more on his Danish heritage, expectations were duly raised.

Hot Dinners was invited to try out the tasting menu at North Road and we were pretty interested to see if the restaurant was going to live up to the early online hype. The place is situated on St John Street (formerly North Road - hence the name) on the site of the old Stephen Bull brasserie and more recently the Clerkenwell Dining Room. The dining rooms themselves are actually quite beautiful - we particularly loved the marble bar (worth remembering if you're ever looking for somewhere for a quiet drink in EC1) - although the Nordic-level of heating did make the room a little stuffy.

Dinner began with a selection of odd looking morsels - some pickled quails eggs, deep fried pork and chicken skins along with some savoury choux buns filled with hare - a Danish take on char siu bao. All had the desired effect of making us interested to want to delve deeper into the menu, so we then kicked off the meal with some smoked scallops, served with wafer-thin slices of apple, cress and hazelnuts - a very pretty dish to look this was a good way to start the meal. 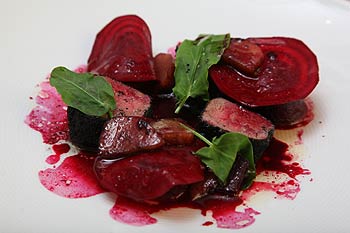 Next was a sugar-cured lobster with buttermilk. This was the first time we'd ever tried cured lobster and it was a bit of a revelation. The sugar cure turned the lobster meat opaque in the same way ceviche would do, and complimented the lobster's natural sweetness.  Sadly, we weren't so keen on our next vegetable course of Jerusalem artichokes with pink fir potatoes and black truffle which was too earthy to be truly enjoyable.

Happily, our meal recovered straight away with a fabulous main course of loin of venison cooked in burnt hay (which also had the happy side effect of infusing the restaurant with its sweet smoky aroma). We then rounded things off with a decidedly pure dessert of Cornice pears served up with smoked ice-cream.

The wine pairing was done well - if not massively inspirational - our favourite was the intensely fruity Raisins Gaulois Beaujolais by Marcel Lapierre which was served up with the artichokes and truffles, but we would have preferred it if some more unusual wines were included.

As a sum of its parts, North Road is a good new addition to Clerkenwell. Even in winter, the stark dining room had a glamour that will only benefit from a little more buzz as it becomes better known. Bizarrely we were the only Londoners dining in our part of the restaurant - everyone was else was either French or American. That's a shame and we'd urge you to go, if only to give this interesting cuisine a go - it's a lot easier (and cheaper) than trying to get a table at Noma.

The tasting menu at North Road is £55 and the accompanying wines an additional £45.

Read what the critics think of North Road and our interview with Cristoffer Hruskova.