[SIGPLUS_EXCEPTION_SOURCE] Image source is expected to be a full URL or a path relative to the image base folder specified in the back-end but /blog/2012/sticks-sushi/gallery is neither a URL nor a relative path to an existing file or folder.
0
Shares 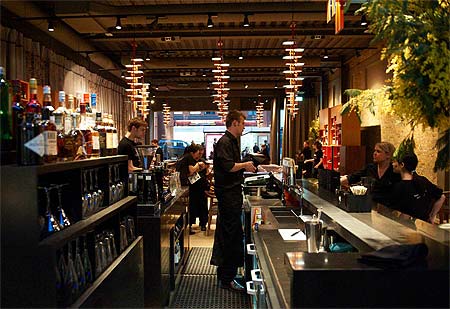 What can you tell me about Sticks n Sushi?

Sushi might not be a native dish for the Danes, but this flourishing Copenhagen-based chain has proved that their appetite for clean, precise plates equal big business. Known for their extensive menus and striking interiors, Sticks n Sushi have nine branches in Copenhagen and provide a place for style conscious Danes to indulge in sushi and yakitori grill sticks, or simply see and be seen at the bar.

Refreshingly enough for their first international venture, the popular group is testing the water with an outpost in London’s SW suburbs. It’s a bold move for a chain you might more reasonable expect to see in Soho or Chelsea.

So where is it?

Sticks n Sushi’s first London home is interesting not only for its location in Wimbledon, but also because of its location in the less upmarket area close to the station, rather than plumping for the ritzy village district up the hill. While uphill neighbours would have included Claude Bosi’s Fox and Grapes and the much-lauded Lawn Bistro, Sticks n Sushi is a new standout in an area still dominated by chains, and an exciting development for locals.

As you’d expect from a brand based on Copenhagen cool, Sticks n Sushi hasn’t skimped on its bar – featuring several low tables, it’s an easy choice for cocktails and appetizers. For a change of pace though, we’d suggest making some extra time for The Alexandra across the street – one of Young’s busiest pubs in London, it’s a neighbourhood staple.

Sticks n Sushi has set up shop in a gorgeous cavernous space previously used for corporate offices. It’s a lavish, if noisy, interior beautifully decorated with lots of exposed brick. The staff whisk you to your table efficiently enough – there’s even a uniform of Danish words and their English translations for those hoping to expand their linguistic horizons.

The team at Sticks n Sushi have taken all of the guesswork out of ordering a sushi platter with separate a la carte and suggested combination menus, handily illustrated with photos throughout. Although this can feel a little sushi-by-numbers, it’s doubtless a huge help for large groups trying to order combination platters, or sushi novices looking for some extra guidance.

Don’t expect to be taken too far out of your sushi comfort zone here. The emphasis is on crowd-pleasing basics that don’t push the envelope too far (to dive in further, we’d suggest checking out Dinings) twinned with meaty grill morsels.

We plumped for a few of the pre-chosen selections (as it seemed, did most of the restaurant) but deviated from the script for our starters – duck wraps with avocado, dengaku miso and yuzu jelly. The duck was tender and perfectly cooked – not too challenging in flavour, but definitely the appetite whetter we were looking for.

Next up, the Fishing Rod platter offered miso-marinated white fish, teriyaki scallops and salmon and tuna, along with rice, kimchee and squid salad and a generous plate of assorted sashimi. The sushi pieces were tender and fresh – we particularly enjoyed the salmon and cream cheese combination for a twist on high tea – and the sticks were an excellent complement.

Providing a meatier companion,  the Mixed Emotions platter blended seafood and red meat into a hefty dish. Traditional prawn, salmon and ‘inside out ‘ rolls came out first for a traditional first act, closely followed by chicken, asparagus/bacon and pork marinated sticks. In this battle, sticks triumphed over sushi – perhaps due to our increasingly carnivorous cravings – but in true Danish style, everything was beautifully presented throughout. On the urging of our waiter, we added the salmon tartar as a side – irresistibly fresh, this may have been our favourite simple dish of the night.

Don’t count out feeling stuffed at the end of a platter – those little morsels of rice really do add up – but luckily, the dessert menu offers smaller bites to those craving something sweet but not stodgy. We tried the Marcel chocolate cake with a tart fluffy raspberry foam that provided an ideal after-dinner zing and overshadowed the crème brulee cup that was its partner.

Both red and white wines get a decent look-in, with bottles starting from £16.50. If you’re looking to bolster the Japanese authenticity though, we’d suggest going for a glass of sake, with carafes from 6.00.

The key here is pacing – starting at around £14.50 for the smallest and simplest, the platters can add up. Food came out fast from the kitchen, and was quick to eat (sushi pieces are difficult to linger over), so we’d suggest picking a maximum of two platters per couple and leaving some time in-between to sip and savour.

Sticks n Sushi could well be accused of style over substance due to flashy presentation, but that would be largely unfair. Although the menu doesn’t stray too far from tried and tested combinations and basics, their fresh fish and carefully prepared platters offer an authentic glimpse into the adoring attention of their Danish creators.

Most importantly, Sticks n Sushi is a significant addition to a growing SW food community and will no doubt build a solid base for further expansion within London. As Noma prepares to loom large over an Olympic London, it’s wonderful to see their fellow Danes taking a local approach to global expansion.

Hot Dinners were invited to eat at Sticks n' Sushi. Prices were correct at time of writing.