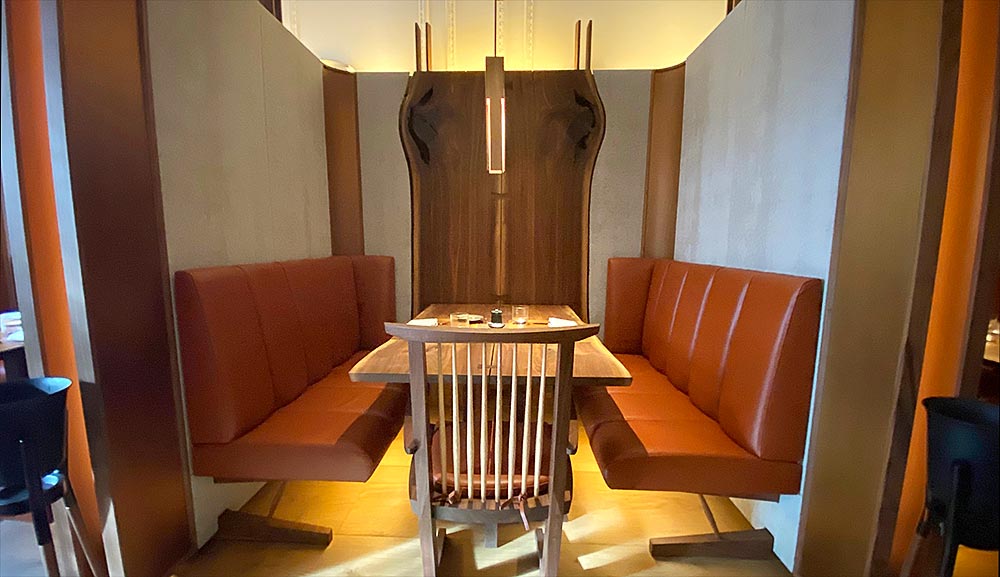 One of the booths at the Connaught Grill - it's like a mini room and perfect for a private chat over dinner.

What can you tell us about The Connaught Grill?

The original Connaught Grill was one of London's iconic (yes, we think the word is deserved) restaurants. It opened in 1955 and ran until 2000, along the way serving up traditional French haute cuisine for top celebs and the odd royal. Now it's back, as The Connaught's third restaurant.

So where have they managed to find the space?

The restaurant takes up what was a function room (part of which was a section of the original Grill), just past the reception area on the right. Over a period of around six months, the room has been completely redesigned, almost beyond recognition. The classic room has been updated with a dark wooden modernist take with exquisite furniture from Mira Nakashima - an acclaimed American craftswoman whose work appears in museums across the States. There's a small, open kitchen leading on to a counter space for four people. It's quite the extraordinary makeover and a blend of new and classic that seems a great fit for the hotel. 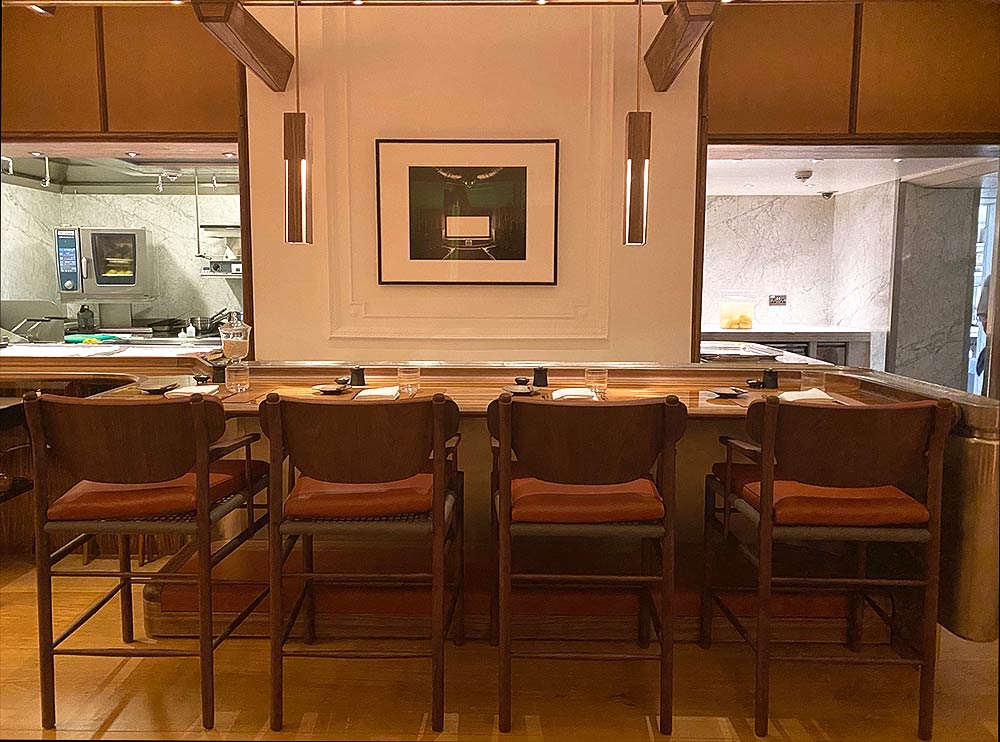 The counter by the kitchen.

Is there a bar in the restaurant?

There isn't, but why would you need one when you have not one, but two of London's best bars inside the hotel? The Coburg Bar at the front of the hotel is more lounge-y and has some excellent seats inside an indoor terrace, but The Connaught Bar will always be our favourite place to go. It's undeniably one of London's top five bars and it's currently number two in the World's 50 Best Bars list. If you have yet to experience it, then the martini trolley is a must - literally delivering one of the best martinis in London.

Post-martini, where's a good seat in the restaurant?

While we really like the look of the counter (and it's definitely a good choice) if you can grab one of the booths, they're very much the best bet. Each seats 4-5 people and will see you cocooned in luxury - almost like semi-private tables. If you're looking to dine away from prying eyes, these booths will be some of the best options in London right now - perfect for confidential business discussions, or clandestine affairs. 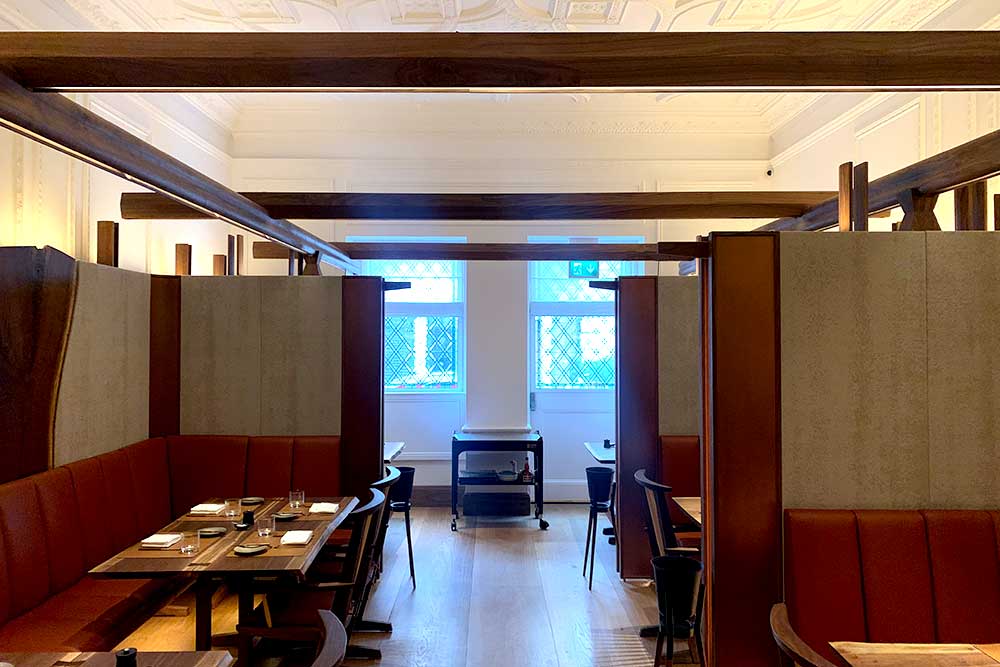 Those tables by the window offer the greatest amount of privacy - perfect for plotting a takeover.

Onto the food itself - what can we expect?

This restaurant, along with the one at the front of the hotel, is managed by Jean-Georges Vongerichten. Here he's put together a menu that's a mix of some of the old restaurant's classic dishes alongside new creations by himself and the hotel's executive chef Anshu Anghotra. It's a blissfully short menu that's split into raw, soups and salads, starters and the grilled mains. There's also the pie menu - and we'll get to that in a moment. Other then the below, the Welsh rarebit with freshly picked Cromer crab also sounds like a good bet,

Here's a taster of what we had: 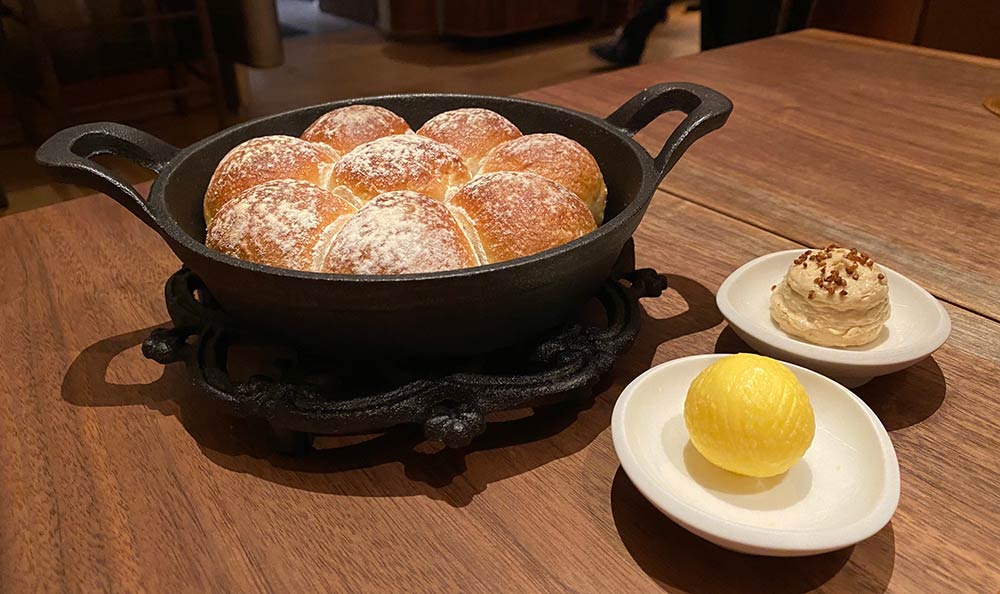 The bread - white sourdough served as little morning rolls with a choice of salted or yeast butters. 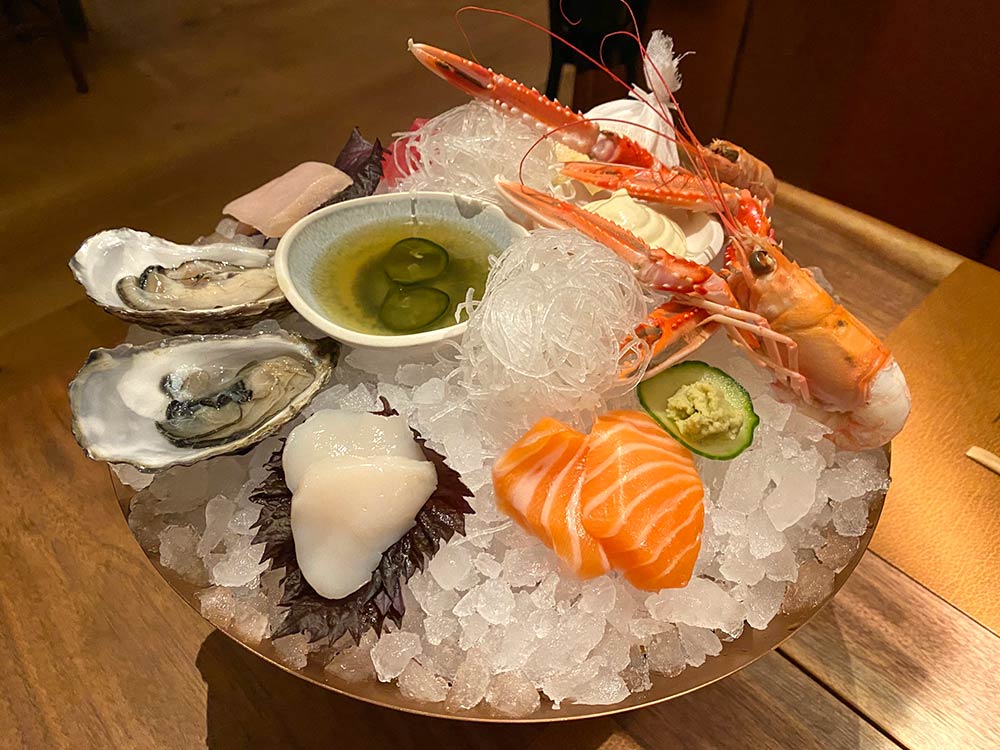 This is a selection of what's available in the raw section. So we had oysters, Spanish tuna belly, salmon and scallop sashimi and chilled langoustines with garlic mayo. All are available separately on the menu, but this selection is available too if you ask. It's a good taster of the raw menu, without going too overboard. 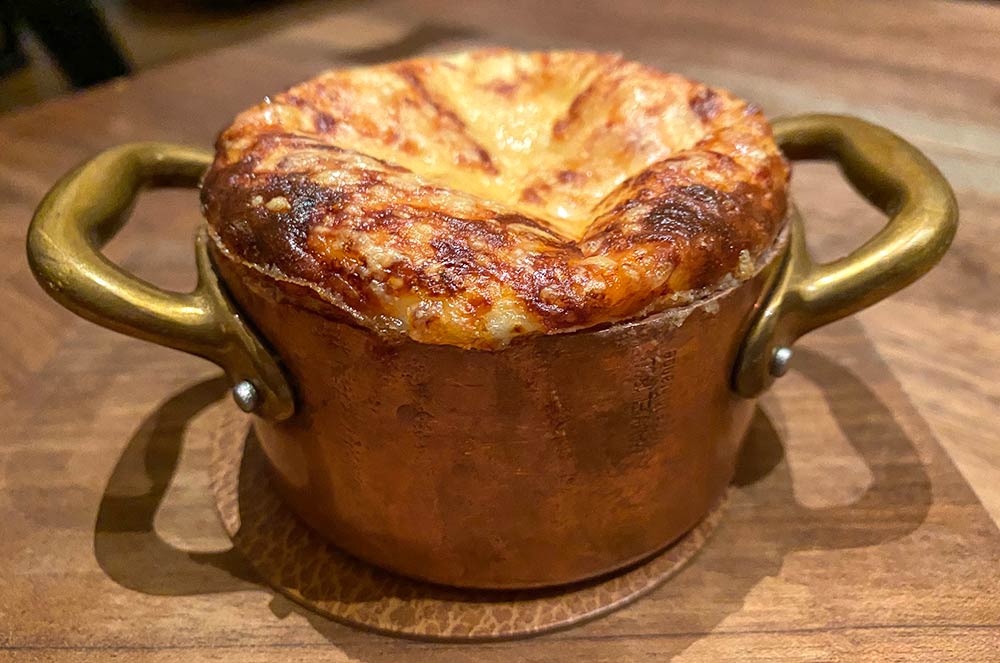 Jean-Georges Oeuf en Suprise -  three cheese soufflé with a softly cooked egg inside (£22 or £58 with black truffle fondue). One of the classics on the old Grill menu that's been revisited with a Jean-Georges twist. 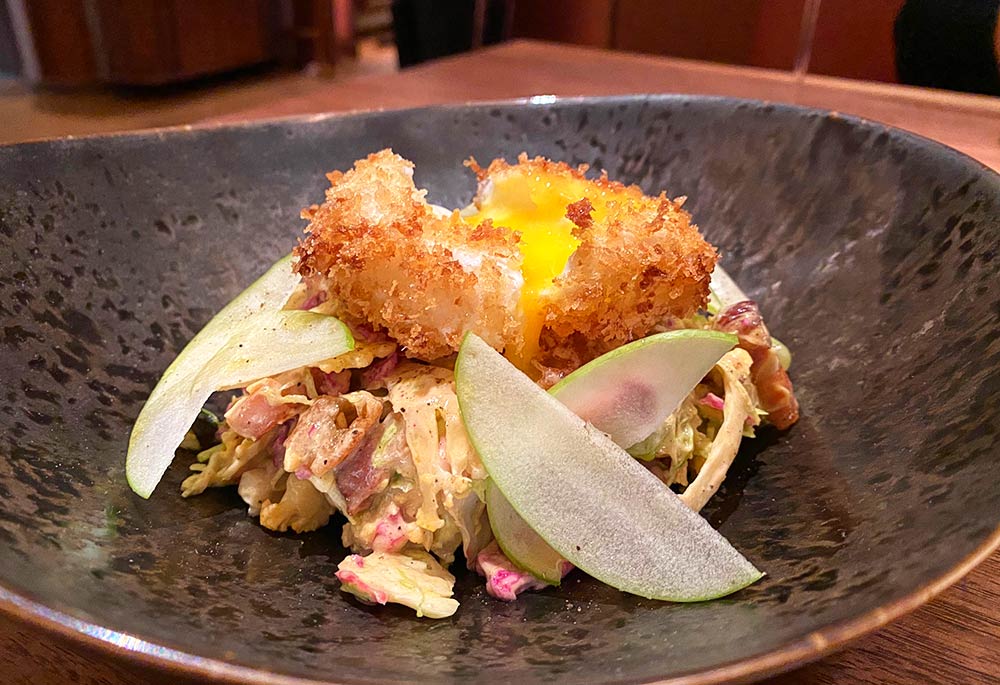 Shaved brussel sprouts salad - with pancetta lardons, mustard vinaigrette, organic fried egg (£22) - clearly a seasonal dish but we'd love brussel sprouts at any time of the year. And if you're going to go for a salad, adding fried bread, bacon and eggs to it is only to going to enhance it. 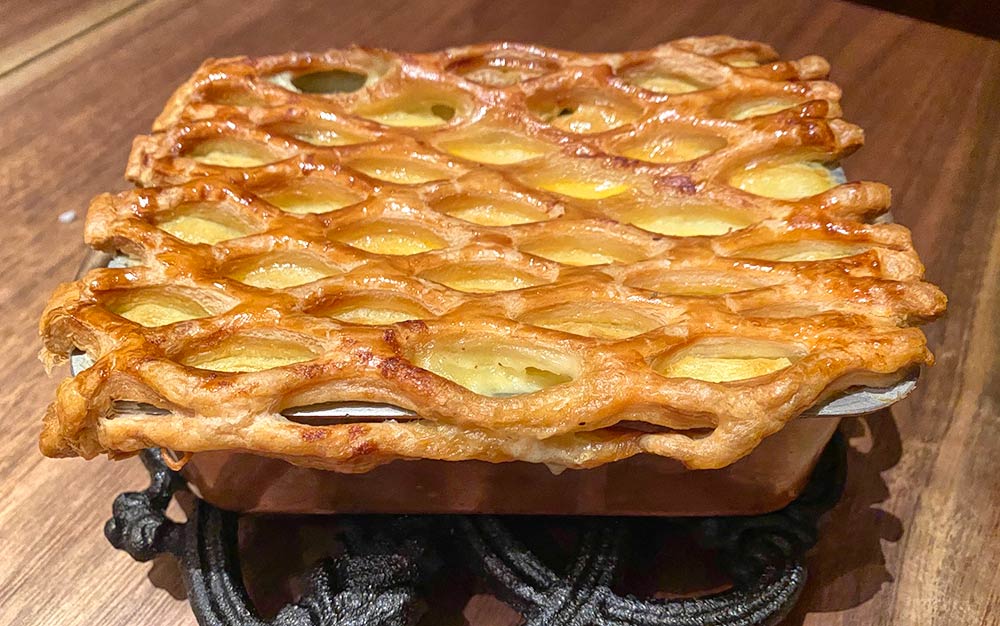 One of the highlights of the menu is the pie of the day (£28). On Friday, it's the above - a seafood pie brimming with salmon and prawns, and which has both mash AND pastry as a topping. It's an excellent pie - but others from the week also sound great like Saturday's chicken and foie gras pie, or Thursday's oxtail and bone marrow pie. 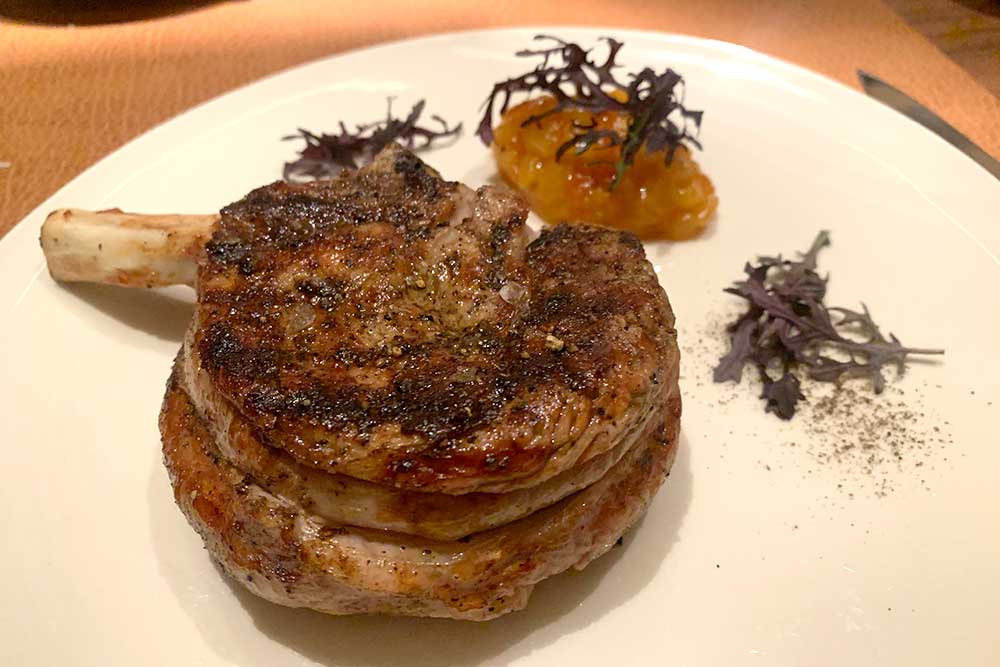 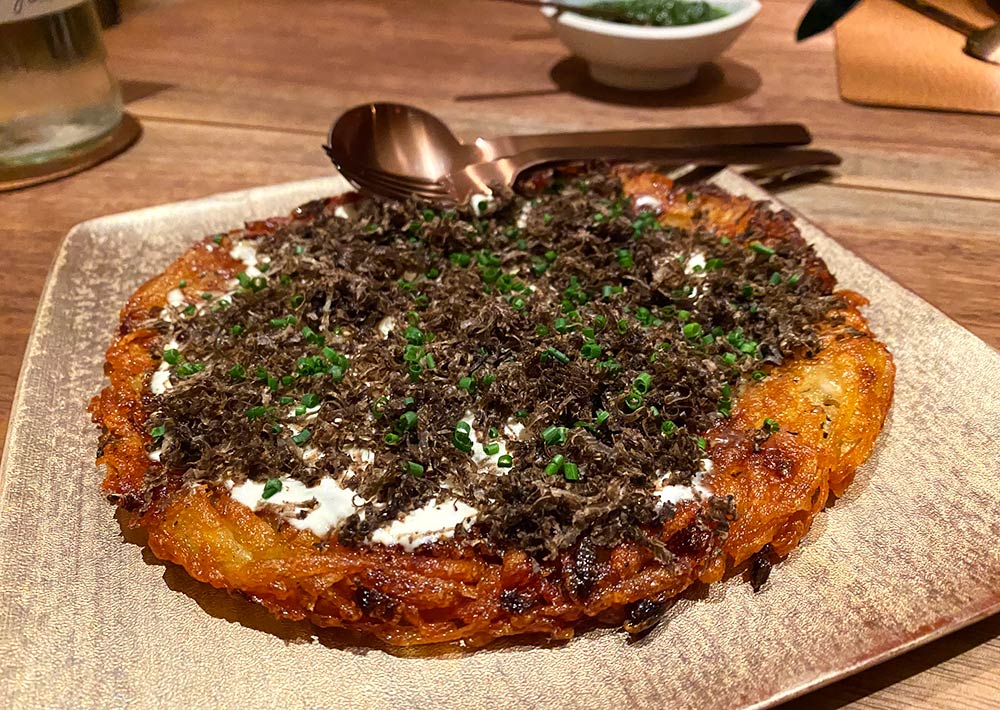 Black truffle potato rosti with creme fraiche and chive (£15) - a must-have side.

There's plenty for vegetarians, including a vegan winter vegetable pie (£22) and another main was the roasted caraflex cabbage with smoked celeriac and dashi glaze (£25). And the sides game here was strong too. 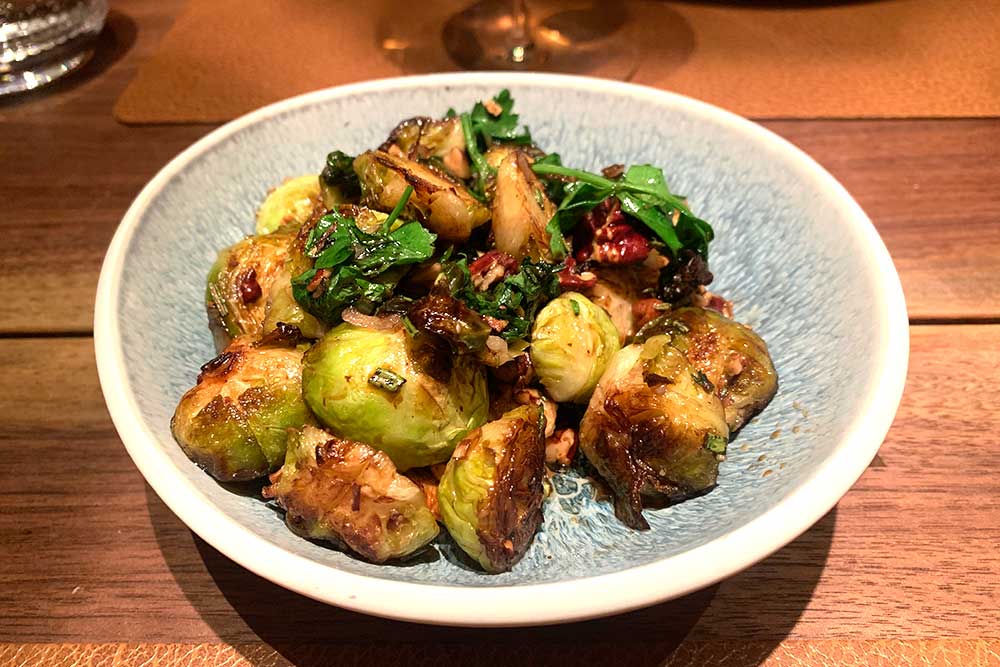 Desserts, like the rest of the menu are a mix of classics revisited and new dishes - and the below showcases examples of both. If you can still manage it, there's both bread and butter pudding and a sticky toffee pudding on the menu too. 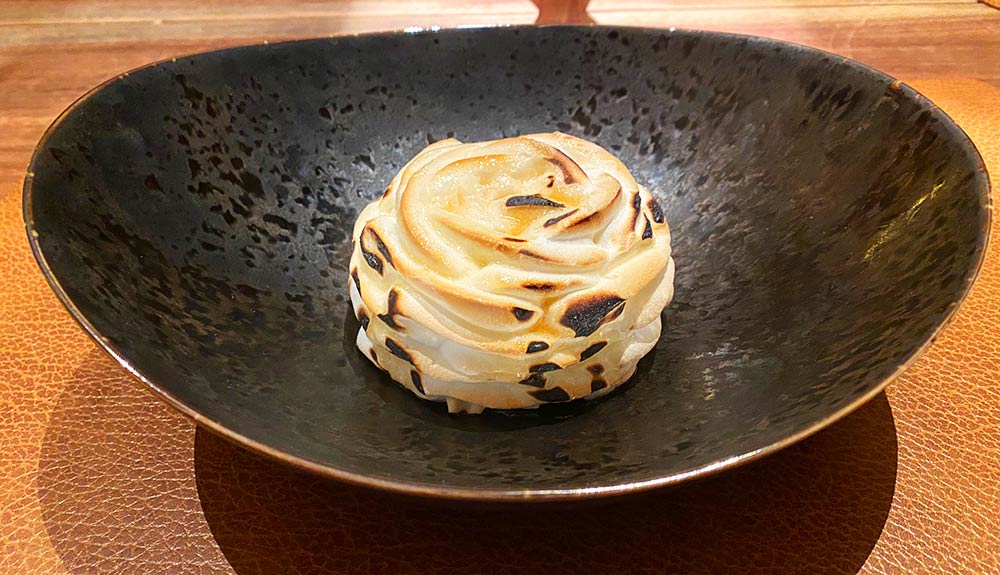 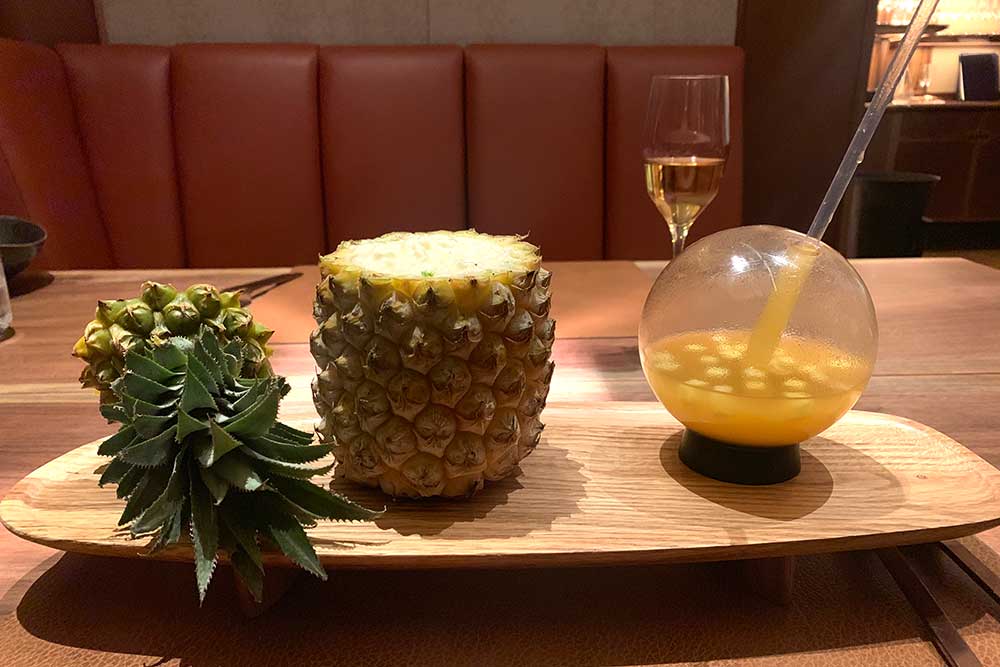 Coconut & pineapple sorbet, exotic grog (£16) - any dessert that comes with its own bowl of rum punch has our vote.

It's already impressive that The Connaught has magicked up the space for another restaurant, let alone to create something that both keeps the classic elements of the room while also having a modernist touch. That same approach is visible in a menu that effortlessly combines classic grill food with a Jean-Georges touch. As with everything this hotel does, attention to detail is all, and this is unequivocally an instant classic - it could be a new London restaurant for powerhouse dining to rival the old Four Seasons in New York.

Hot Dinners dined as guests of The Connaught Grill. Prices are correct at the time of writing.

More about The Connaught Grill