[SIGPLUS_EXCEPTION_SOURCE] Image source is expected to be a full URL or a path relative to the image base folder specified in the back-end but /blog/2012/south-place/gallery is neither a URL nor a relative path to an existing file or folder.
0
Shares 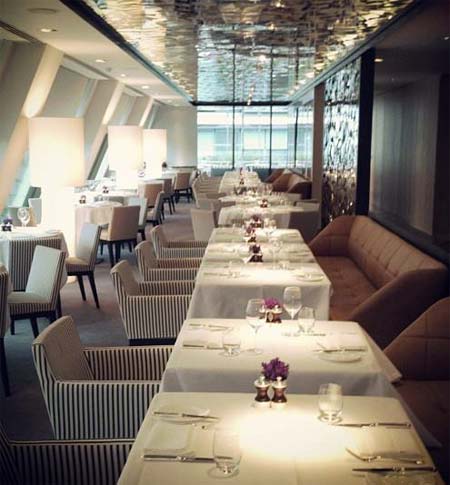 What can you tell me about South Place?

This new hotel, between Moorgate and Liverpool Street is the first venture into overnight hospitality by D&D - the group which runs restaurants all over London including the Blueprint Cafe, The Almeida and Launceston Place. It's the second of two big openings for them in the city, the other being the Old Bengal Warehouse group of restaurants near Liverpool Street. South Place also features two restaurants, including the rooftop Angler, which we visited.

It's just a stones throw from Moorgate station - so right in the heart of the City.

Where should I meet friends for a drink?

There are two bars here - a lobby bar on the ground floor and one attached to Angler restaurant upstairs. However, while it's still open to non-residents (and the weather holds) head up to the first floor to the outside-ish bar The Garden. We say 'ish' because it's a lovely snug space with sofas, heaters and awnings. You can smoke here (should you wish) and it's as snug as being indoors but a lot more fun.

Alternatively, you can also try the Jugged Hare which is less than five minutes walk from South Place.

And what about Angler restaurant?

This is the fine-dining space at South Place. On the seventh floor it has fabulous views over the city with a separate bar and large outdoors terrace with heaters. We popped out on the terrace for a couple of quick, good cocktails before being led into the restaurant. Front of house here is run by Jon Cannon who you may remember from Roganic when it first opened. He's been up at L'enclume before being lured here to run things for D&D and he's doing a fine job - we thought the service in Angler was at a very high level considering they'd only been open for weeks with no soft launch to ease staff in.

Executive chef Tony Fleming (formerly at One Aldwych and the Great Eastern) has put together the menu. It has a strong focus on fish (hence the name). Our starters included langoustine and crab 'sausage' which was a lot tastier than that name would suggest and a dressed crab which, while impeccably prepared, was served to us without the necessary mayonnaise it needed. For mains, the Angler and lobster pie (£21) was a rich and frankly huge fish pie which could easily have fed two (although the person who ordered it was just a leetle too greedy to share on this occasion). We'd happily go back and order that again, as we would the perfectly done roast grouse complete with four little saucepans of traditional garnishes, game chips and some of the most sinfully creamy mash we'd had in a long while (£22.50)..

For dessert, we'd recommend the Pedro Ximenez trifle, which was excellent - although we do wish they'd advertised the nuts on top so we could have asked for them without (not allergic - just not fans of them).

And what if we decide to make a night of it and stay over?

It feels fabulously decadent to be spending a night in a hotel in the city you live in. We're barely a 20 minute train ride from South Place, so it felt particularly nice to knowing we weren't going to have to head home afterwards.

Our room - a Dominion - was beautiful with floor to ceiling windows (although we had to draw the blind against the builder working on the building opposite), fur throw on the bed, designer magazines artfully strewn on the coffee table and a decent sized bathroom. But what elevated this room from the usual luxury city spots was the mini bar - ours had full-size bottles of Sipsmith vodka and gin with a cutting board for the lemon or lime we might want with it. Snacks included Tyrells crisps, Joe & Seph's gourmet popcorn, spelt fruit slice and all manner of lovely sweets and Melt chocolate bars. Heaven (as we found in the wee small hours when we plundered it).

The other treat for guests is the use of Le Chiffre - a private club space upstairs complete with billiard table, music and a whole library of fresh books to choose from. Our one issue here is that they need to think about how people should order service from here - it wasn't clear how we'd get a drink so we ended up popping down to the bar ourselves.

Did you have breakfast?

Yes, we popped into the downstairs more casual 3 South Place restaurant for a cracking breakfast. We could have totally pushed the boat out and had Galloway steak or kedgeree but instead settle for a Full English and a salt beef hash with duck egg, both of which were cooked to order and as pleasing as you can imagine they'd be after a late night out. Juices are freshly squeezed and we could see lots of other guests trying the smoothies.

This would be a great place for breakfast meetings - we can imagine closing deals (that's what City folk do, right?) over a fried egg banjo or plate of drop scones with fruit and Jersey cream.

We loved Angler - particularly the great urban nightscape views - and the staff at South Place are really friendly - whoever's trained them up should be very proud. Just two weeks in, they were uniformly welcoming and helpful. And the hotel's going to be a real hit with the City crowd: if you need to book a special room both the private dining space at Angler (and regular function rooms) are both eye-popping.

If you can, treat yourself to a night over (weekend rates start at £170 - particularly if you're a Londoner. It's all the more for staying overnight in your own city.

Hot Dinners were invited to eat and stay at South Place. Prices were correct at time of writing.