[SIGPLUS_EXCEPTION_SOURCE] Image source is expected to be a full URL or a path relative to the image base folder specified in the back-end but /blog/2012/juggedhare/gallery is neither a URL nor a relative path to an existing file or folder.
0
Shares 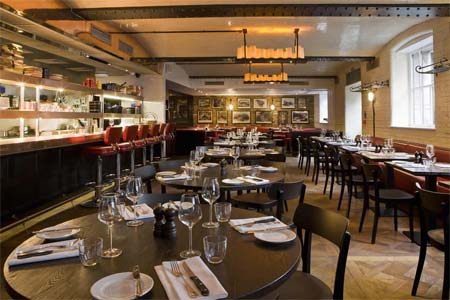 What can you tell me about the Jugged Hare?

It’s the latest venture from Tom and Ed Martin, the brothers who are behind places like The Botanist, The Gun and the Chiswell Street Dining rooms, which is only just next door.

As with Chiswell St, the Jugged Hare is connected to the Montcalm hotel, but this time they’re going for a more gastropub affair. So the front part of the building is more of a standard boozing section with plenty of bar snacks on offer (pork crackling, venison Scotch egg, bacon and shrimp balls and more).The back half is your more standard restaurant dining room.

The restaurant also has a strong focus on sustainable ingredients and all eyes are on the large ever-changing rotisserie section.

It’s just beside (and part of) the Montcalm hotel, off City Road and about five minutes walk from Moorgate station.

Obviously, it'll appeal to nearby city workers and we think the tables are spaced apart enough that they could easily take clients and not have the next table earwigging. Otherwise, if you're after a meal out with friends in the area, it offers a more laid back place to go than the Chiswell St Dining Rooms next door.

Where should we meet for a drink beforehand?

The pub at the front of the restaurant is obviously the easiest place to meet - but it can get a bit crowded as nearby office workers descend on it.  Alternatively, you could try the bar at Chiswell Street Dining Rooms or L'Anima's a short walk away if you're looking for cocktails. If you're coming from Barbican, it's worth popping into the Sutton Arms which is on the way to the Jugged Hare.

We particularly liked the banquettes at the back of the restaurant, so try and get a seat there if you can. There also an opportunity to sit at the food counter, watching suckling pigs and the like cook in front of you on the rotisserie - but we think those seats would only be suitable if you're dropping by for a quick bite.

It is indeed – a mini loaf with salted butter is brought and replenished regularly (just as Hot Dinners likes it).

First off, the bar food is a good bet for snacking on while you look through the menu. We settled on the black pudding croquettes - three large crunchy croquettes served with a Guinness sauce that and we'd certainly have them again if we popped by the bar.

Of the main meal - the starters probably impressed the most. The sautéed chicken livers on toast with fried pheasant egg compared well to similar livers we tried at the Dock Kitchen the other week. It's the sort of dish we'd have shied away from in the past (memories of school dinners) but we've become converts after our recent encounters. For mains, we went for the steak and the spit roasted stuffed sucking pig from the rotisserie. The steak was a decent cut and cooked as ordered and the suckling pig was served pre-carved like a sunday roast (and with the gravy on the side). It was a fine piece of pig, but our only concern was that we felt the portion size - it was for two to share - could have been more generous.

Plenty of sides are available, with the parsnip and garlic gratin making a good change from potatoes.

Of the desserts, the clear favourite was the rich black treacle tart served with separate jersey cream - an extremely rich dessert but that didn't stop us from drenching it in cream too.

Slap bang in the middle of the City, the wine list can be a little punchy, particularly if you get to the monthly wine flights – but these do offer a regularly changing wine list as a result. They also have a “by the glass” system so there are a good few interesting wines available by the glass as a result.

The Jugged Hare is a good bet for City folks (and lawyers from Slaughter and May across the road), particularly if you’re looking for something a little more casual.  Even if you're only passing, we'd recommend stopping by to go through the generous list of bar snacks.

Hot Dinners were invited to eat at The Jugged Hare.  Prices were correct at time of writing.