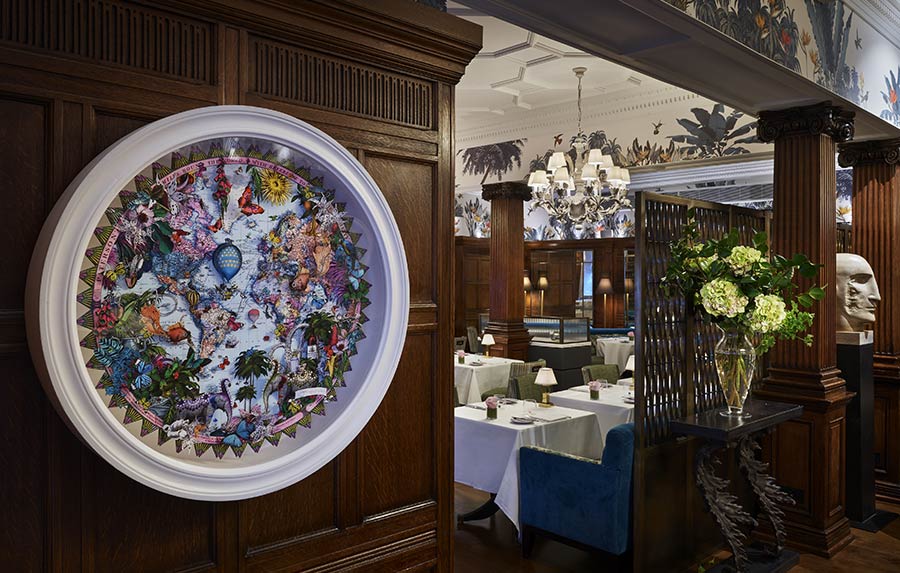 Looking into the restaurant.

What can you tell us about Charlie's?

It's the main restaurant at Brown's Hotel in Mayfair (following the demise of Beck at Browns, the restaurant before it), which sees Adam Byatt (best known for Trinity in Clapham) and his team take over. In the kitchen is head chef Matt Starling, who's previously been head chef at Fera in Claridge's. Byatt started his career in Claridge's, so he knows a thing or two about five-star hotels.

The restaurant is part of Brown's hotel, which has been a stalwart of the London hotel scene since 1837, so there's a fair bit of history in these walls. It's just off Piccadilly on Albemarle Street (up the road from Gymkhana) and about a five-minute walk to Green Park tube. 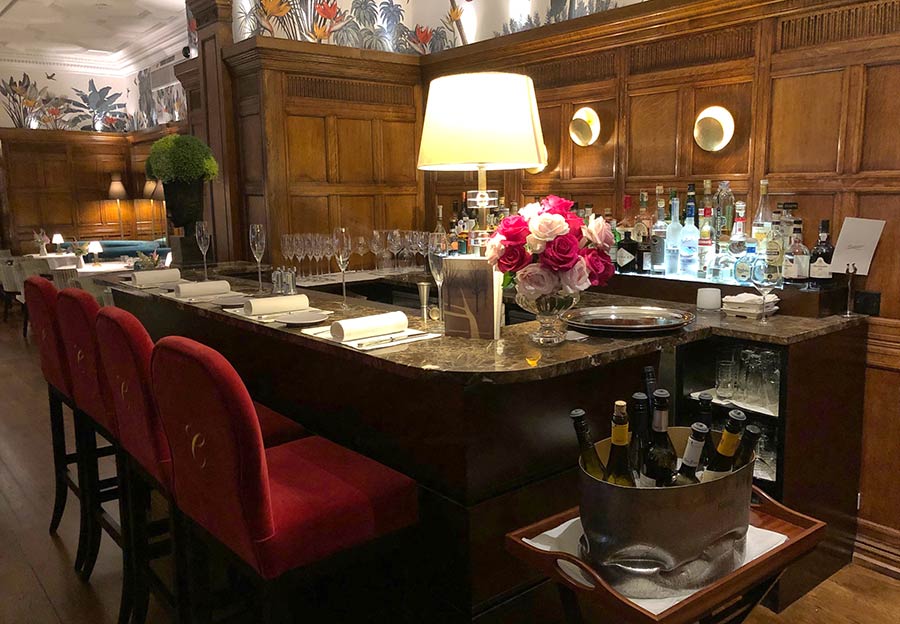 The small bar in Charlie's (where you can also dine). Note the monogrammed stools.

If you haven't been, Brown's hosts one of London's best cocktail bars, the Donovan Bar (named after photographer Terence Donovan, whose work adorns the walls). The man in charge of the bar is cocktail legend Salvatore Calabrese, who has 40 years of cocktail experience behind him (and was responsible for coming up with the martini at Duke's - one of, if not the best in London). So making time for a trip to Donovan's before or after your meal should be the thing to do.

But there's also a small bar area in Charlie's itself - which also has a few champagne cocktails from Calabrese (at around £20) - so you could start the night there.

Has the room changed much?

Apart from some newly monogrammed stools at the bar, not much at all. It was completely renovated for Beck at Brown's only a year ago, so wasn't really in need of a spruce up. So if you've been in the past year, expect a similar look. Seating wise, the best seats are probably the booths on each side of the room.

The menu is significantly different from Becks, and much more in line with Byatt's Trinity (you can expect to see some familiar items on the menu from there). It's more classic modern European, with a seasonal touch. The main menu is split into sharing snacks, small plates and mains (divided into fish, meat and veg). Here's what we had on the night. 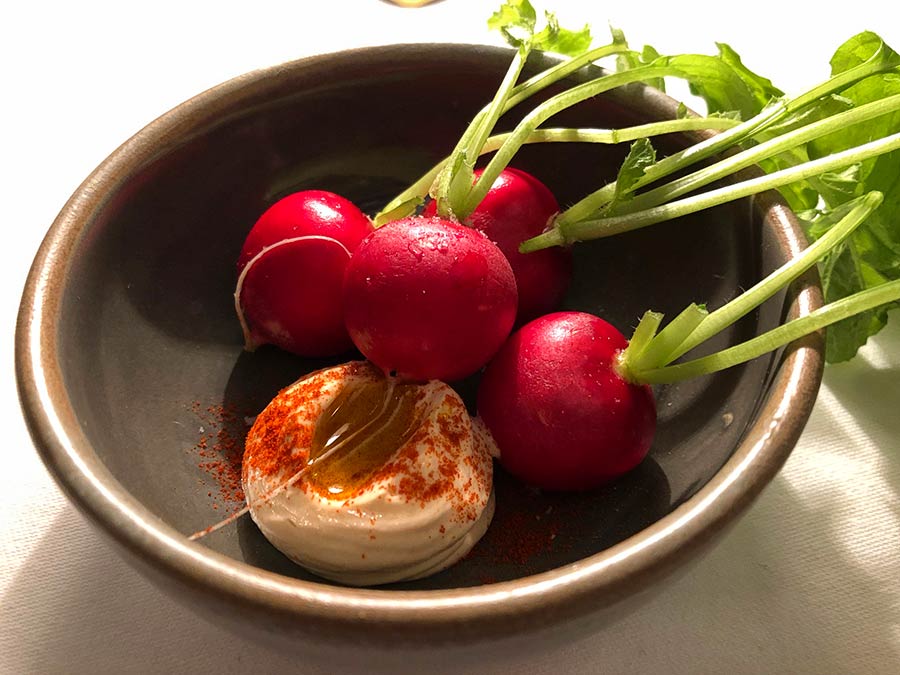 When you arrive, two things come to the table first. You're given a parmesan wafer and then a bowl of radishes and smoked cod's roe arrives on the table. It's becoming a common combination - but we're happy with that. Excellent cod's roe. 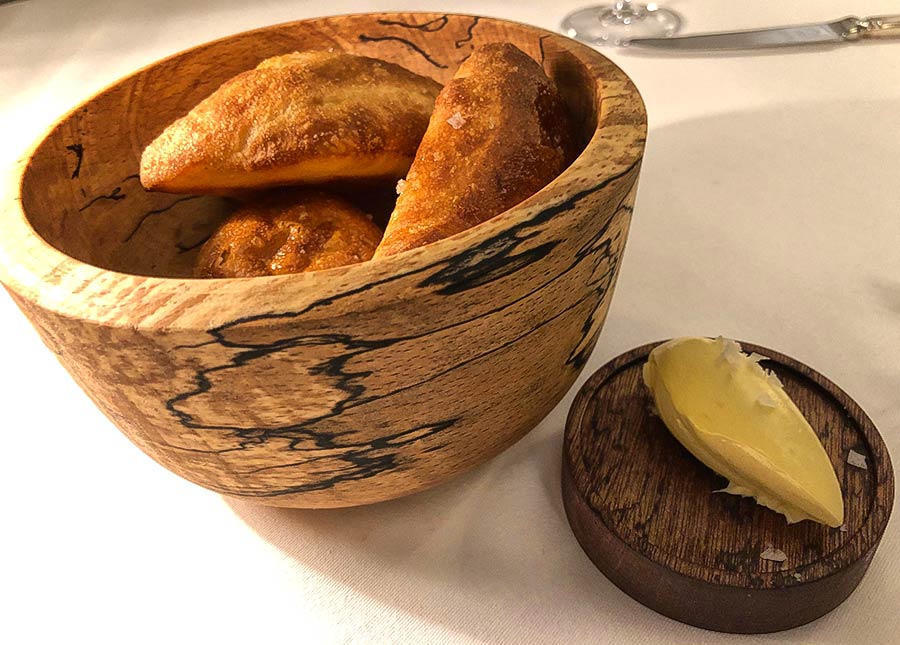 Next up - the bread. Wonderfully good - piping hot from the oven. It's a cross between a focaccia and sourdough ciabatta, made daily and finished to order and uses Shipton mill flour (the last organic mill in the UK). 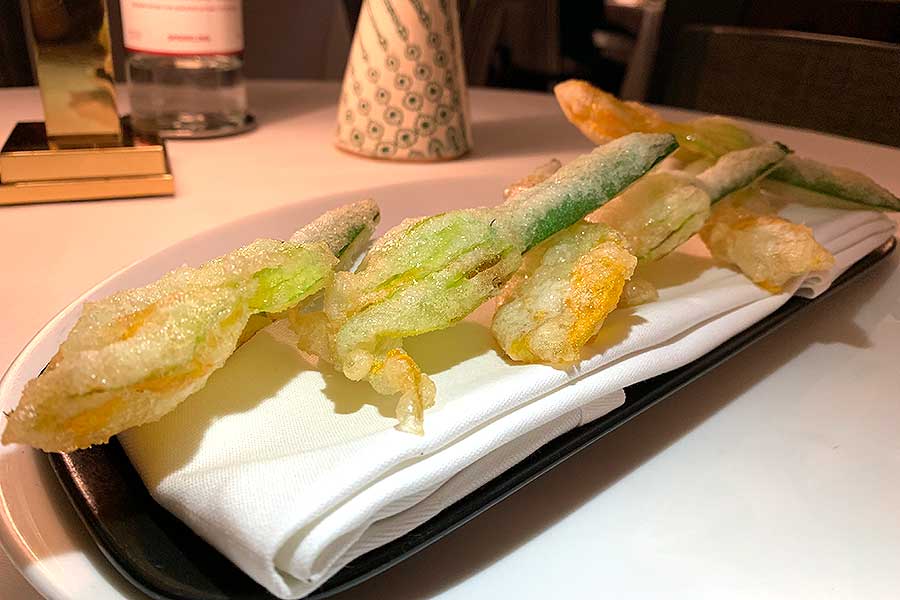 The must-have item from the sharing snacks section. These are fried courgette flowers with truffle honey (£15). You get six to share so you could always share these as starters if you're after a light dinner/lunch. 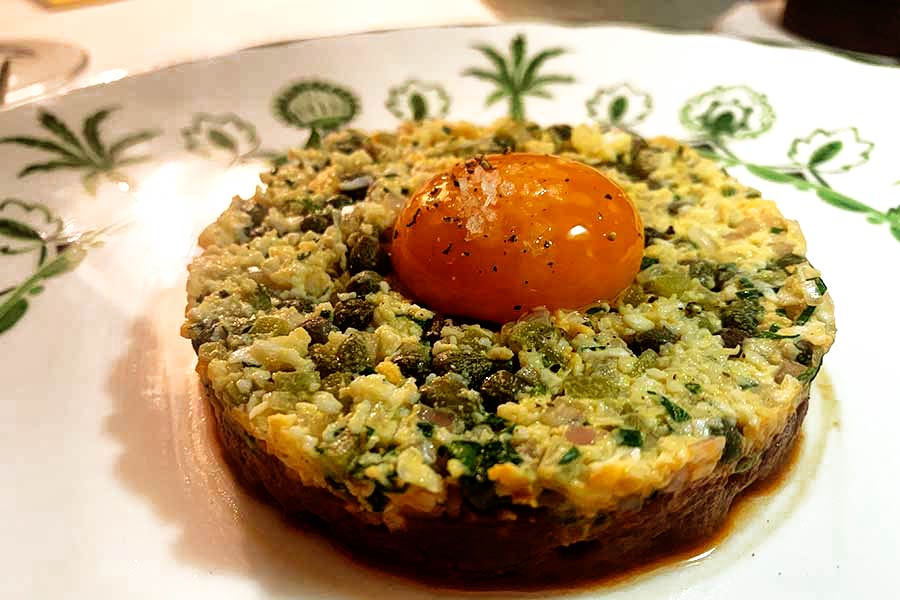 Tartare with lake district fillet, tartare ketchup and classic garnish (£15 or £30 as a main).That ketchup really cuts through a particularly fine tartare. 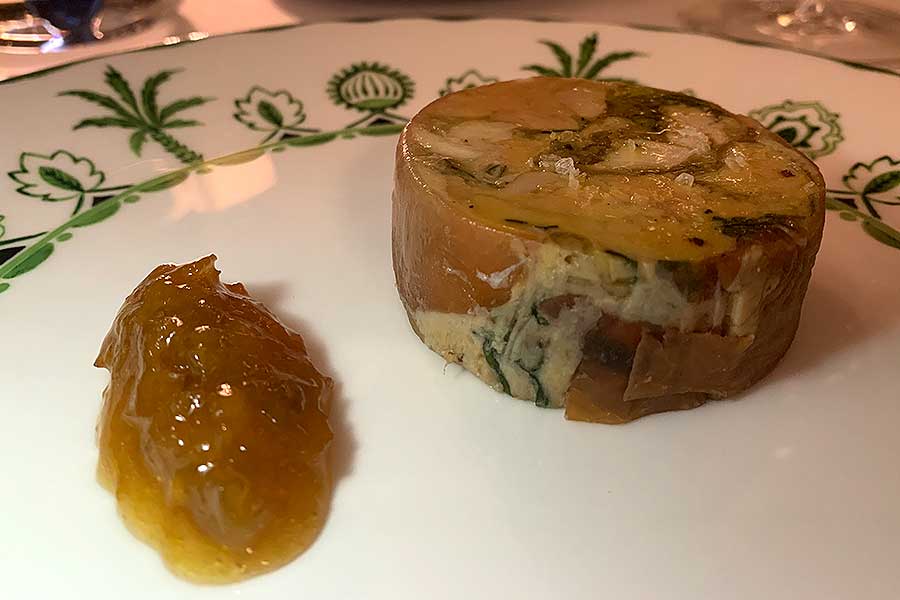 Pressed terrine of chicken, duck liver and ceps. It comes with a thick slice of toasted brioche (£14) and properly room temperature rather than fridge-cold. 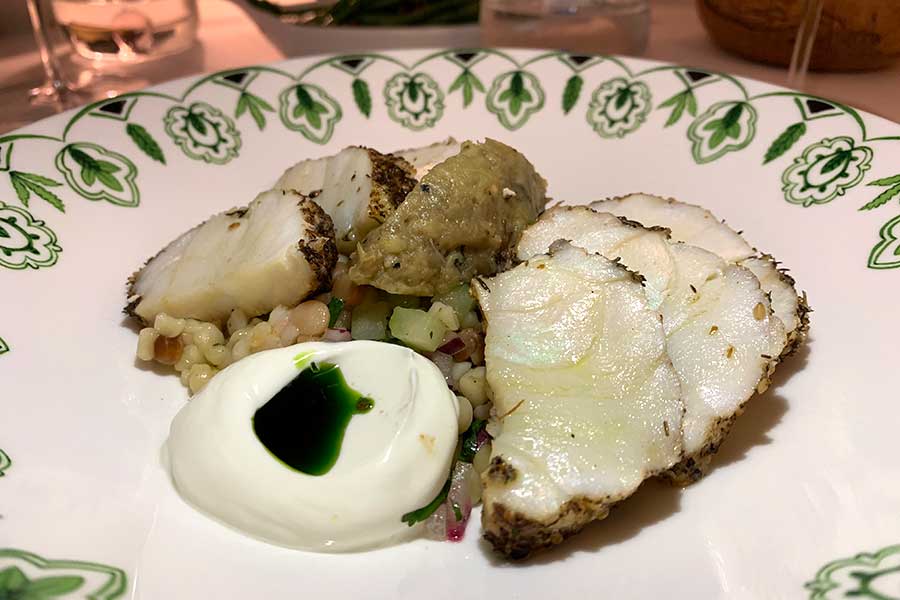 Za'atar spiced monkfish cooked over coals, fregola and smoked aubergine pesto (£31) - we weren't too inspired by this dish, and had been expecting it to be a little spicier than it turned out to be. 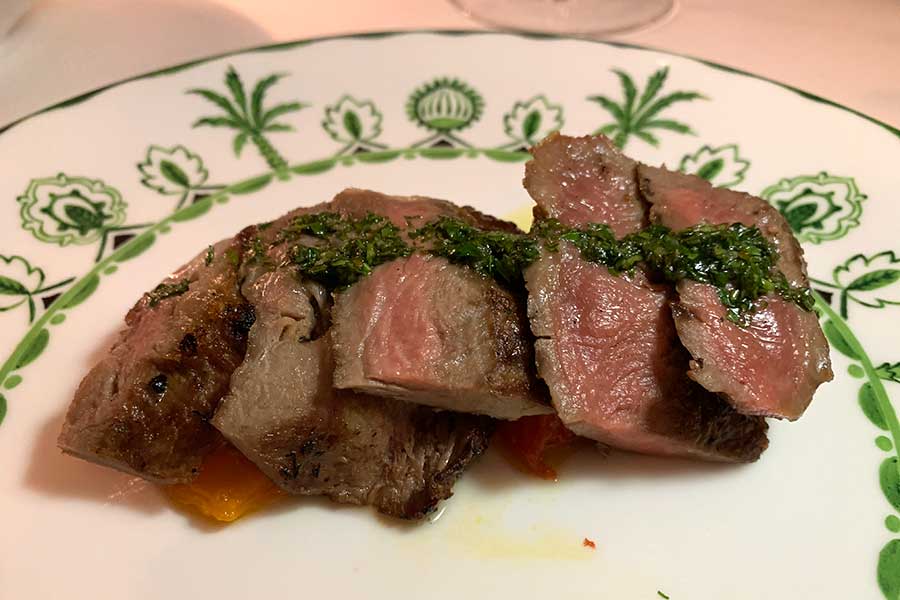 Iberico pork pluma, cooked over charcoal with a tomato salad and saffron risotto (£25) - and the star of this dish follows... 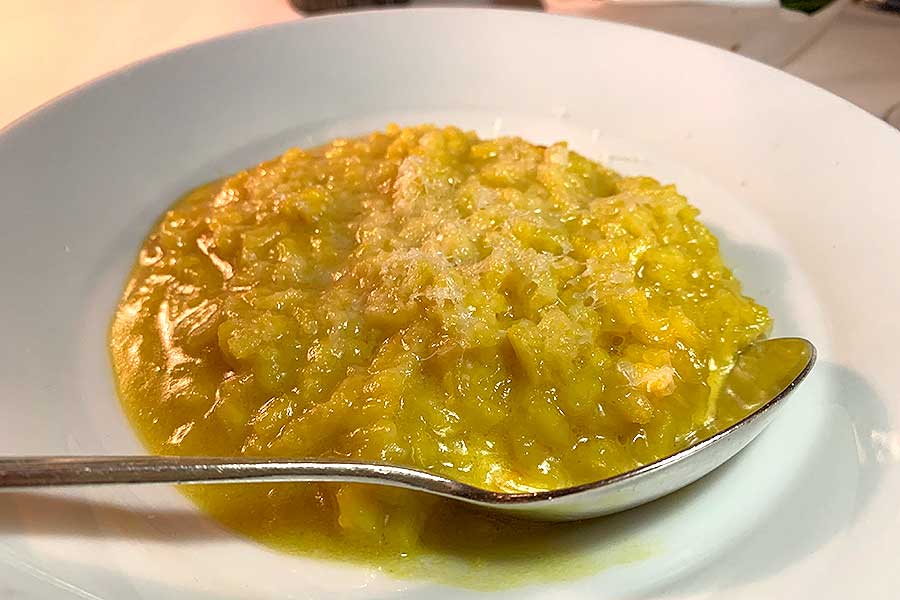 The Day-Glo saffron risotto that came with the pluma was excellent. They really should have this as a side that anyone could order (we had some excellent chips too - but that's because we do like our carbs).

There are three veg small plates (including the Brown's salad of endive, candied walnuts, pink grapefruit and blue cheese dressing (£9/£14) and two vegetarian mains, one of which sees a return of the courgettes - aa salad of summer courgettes and their flowers, along with cashew hummus and lovage (£22).

They have a strong selection of their own ice cream and sorbet on the menu, but you'll really want to save yourself for one dessert in particular - which is a classic from the Trinity menu... 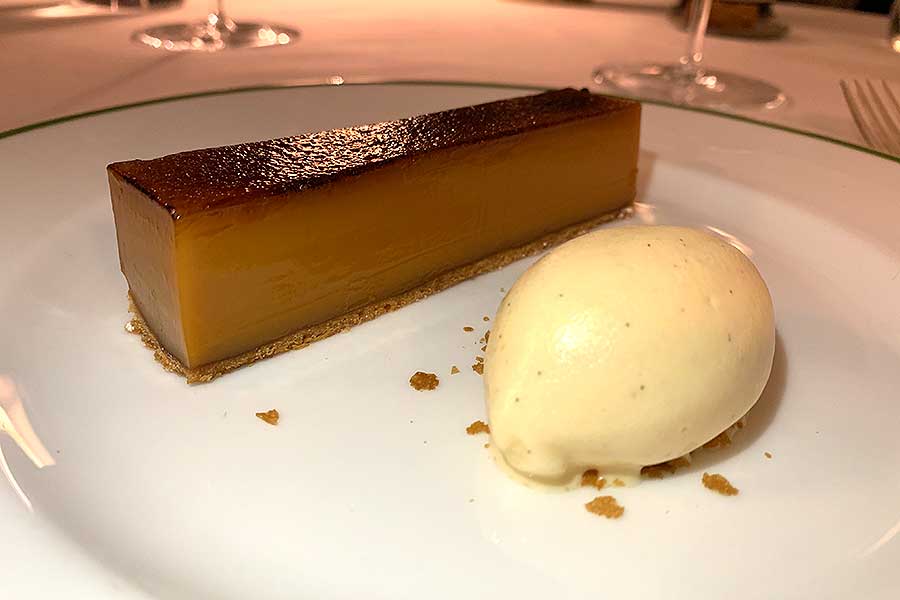 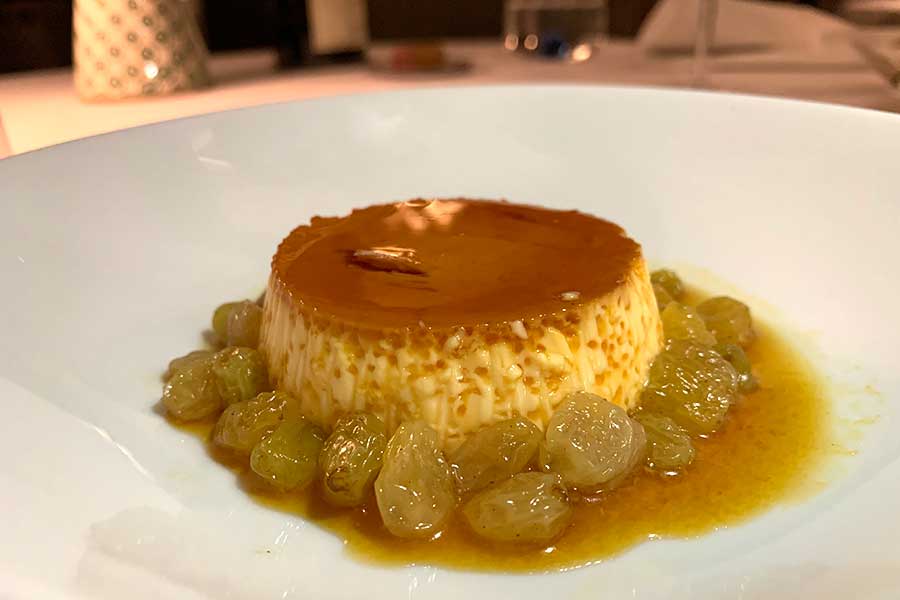 Apart from the aforementioned cocktails, wines start at £9/£11 a glass (with both 125 and 175 glasses available, we're pleased to see). Although you can head upwards to £1600 a bottle (Chateau Haut Brion 2000) if you're in the spendy mood.

And there's something about trolleys?

Alas, the trolleys are only available at lunchtime (we visited in the evening - but we really do think they need more trolley action then too). Each day the trolley changes, including options like rack of lamb, poached chicken and roasted rib of Lake District beef for Sunday lunch.

Already, it seems that Charlie's is a much better fit for Brown's, bringing back more of a classic dining feel to the restaurant. There are some excellent touches throughout (the fried courgette flowers in particular) and if they bring the trolleys into the evening, it'll add that extra element of theatre that goes down so well in a location like this. We think this restaurant will last significantly longer than its predecessor, that's for certain.

Hot Dinners ate as guests of Charlie's. Prices are correct at the time of writing.