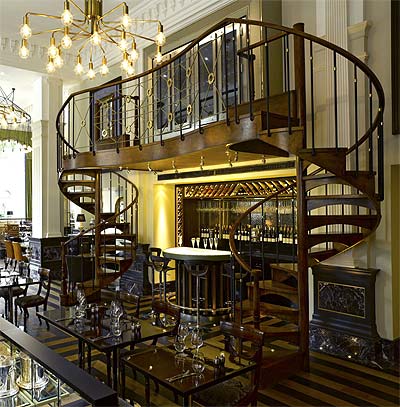 What can you tell us about The Balcon?

The restaurant attached to the Sofitel on Pall Mall used to be a Brasserie Roux but has recently changed hands and undergone a major refit. The chef is Vincent Menager who was sous chef in the previous incarnation and the room has been completely redesigned under the auspices of Russell Sage, recently famed for Bread Street Kitchen and the Zetter Townhouse.

Parked on Pall Mall and attached to the Sofitel St James, the Balcon will certainly be looking to attract a well to do crowd.  Yet we think the convivial atmosphere and attentions of the staff on hand means it goes beyond that.  Expect hotel residents, businessmen, and those who simply want the attentions of the Champagne Angel (more of her in a bit). We think it's worth turning up for the food and the amazing room, too.

Oh and the odd international statesman may be there too, as Desmond Tutu was eating at the table next to ours. (We tried, and failed to be nonchalant about that.)

So, where should I meet up with friends beforehand?

As The Balcon is attached to a hotel, there are plenty of meeting places within, but your best bet would be the hotel's newly revamped St James bar.  The refit has meant that the bar is now just a couple of steps away from the restaurant and within you'll see that it's had a major overhaul, designed to resemble Coco Chanel's French apartment. It was extremely busy when we visited, so word has clearly got out that there's a decent drinking hole here among the private clubs on Pall Mall.

We think the best table is on the left corner as you come in from Pall Mall.  There you'll get a great view of the stunning room as well as the impressive balcony that hosts all the wine. And you'll also have the perfect table for people watching - always a favourite Hot Dinners pastime.

Onto the food. Is bread included?

It certainly is, with a fantastic selection of warm bread delivered to your table alongside smoked butter. This was some of the best butter we've had all year and we would have taken home a jar if we could.

The Balcon's menu is a curious mix of French and British which, against the odds, works incredibly well.  It's one of the more interesting menus we've come across this year, with plenty we'd order on a return visit.

To begin with you can choose from more traditional starters or move along to tarts & tartines, salads or charcuterie.

In the name of research, we opted for charcuterie and more.  There's a special charcuterie section in the restaurant and from that we had a selection from Trealy Farm in Wales and Mas le Rouget in France.  Standouts were the air dried lamb and ham, but particularly amazing was the bramley apple chutney that it came with.  As with the butter before, we were left wanting more and would have happily bought a batch to take home.

Charcuterie behind us, we next tried the pike custard with brown shrimps, crustacean velouté & sourdough toast and the wild Devon mussels mariniere on welsh rarebit, the latter almost a full meal in itself.  Though we were also impressed by the pike custard, we thought the veloute was maybe one element too far.

The mains menu is divided into rotisserie, slow cooked, and pan & grill.  We opted for the beef fillet and the beef and foie gras cottage pie with chanterelle mushrooms.   The latter was a fantastic dish, with a huge slab of foie gras laid across the top.

Following this we were almost tempted to skip dessert and go for one of the puddings to share, the cannalés bordelais.  The sharing puddings (the other being warm madelines in chocolate sauce) were a great alternative to a full-on dessert. However we were encouraged by our waitress to try the blackberry financier and green apple sorbet, which we happily demolished too.

The Balcon is rightly becoming quickly known for its "champagne angel", its sommelier Christine.  She has been fully responsible for pulling together the champagne list with over 70 types of champagnes arranged by region.  On top of this, she'll happily recommend champagne to go with each course by the glass (we had the Paul Déthune Blanc de Noir as the Balcon is the only place to have this by the glass in the country and it's a perfect match for the charcuterie.)

As for the wine list in general, the cheapest wine by the glass is Colombard IGP, Côtes de Gascogne Sauvignon or Merlot for £5.75 a glass (going up to £23.00 a glass for the Jean-Claude Boisset Pommard Les Vaumuriens, Burgundy Pinot Noir).

An interesting menu which delivers, an amazing looking room and an equally good looking bar make the Balcon a great new choice in London and a useful spot for this part of London which isn't big on decent places to eat out. We still crave the chutney.  And the butter.

Find out more about The Balcon

Hot Dinners were invited to eat at The Balcon.  Prices are correct at the time of writing.