[SIGPLUS_EXCEPTION_SOURCE] Image source is expected to be a full URL or a path relative to the image base folder specified in the back-end but /blog/2012/dock-kitchen/gallery is neither a URL nor a relative path to an existing file or folder.
0
Shares 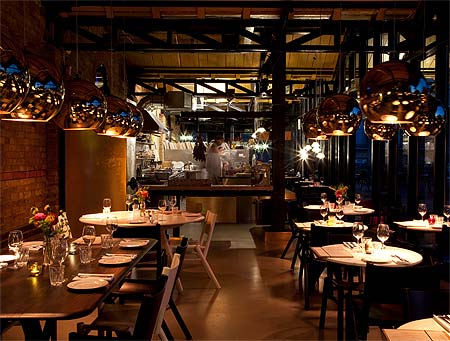 What can you tell us about the Dock Kitchen?

The Dock Kitchen was set up in 2009 by Stevie Parle and his sister, and was originally conceived as a pop up venture. It grew roots in a building by a canal in West London, gradually taking over the entire building. Parle is widely known for his columns in the Telegraph, but the Dock Kitchen is his home although he still does the occasional road trip – he’s recently come back from a week-long pop-up in Milan.

The restaurant is perhaps best known for its ever-changing menu, which constantly takes inspiration from the best ingredients of the season.

It’s housed in a former architect’s building (Tom Dixon’s) on the banks of the canal in Kensal Green in West London. So that’s either a short walk from Ladbroke Grove underground or from Kensal Rise overground. The building is therefore a bit of a stunner – plenty of glass with a surprisingly comforting view of West London and over the canal.

A particularly wide range, we think. The canalside setting makes it ideal for a romantic date, but there’s a great buzz about the place – especially when we dined on a packed Friday night – so it’s ideal for a groups of friends who want to get together over some frankly fantastic food.

We’d recommend coming down from the Kensal Rise station if you can – taking in local drinks haunts like Paradise by Way of Kensal Green or The Chamberlayne, both local pubs that are well worth checking out while you’re in the area. But well worth a look is the bar downstairs, Kitchenette, with the same wine list as the Dock Kitchen and a number of bar snacks on offer too (although we’d recommend forgoing the bar snacks if you’re eating in the restaurant – you’l be glad of a hearty appetite).

The building is short and long, with the open kitchen placed right in the middle – so sitting at the back or the front of the building won’t make a big difference. You can ask to be seated nearer the kitchen if you want to take in the action but we’d recommend a seat by the window if you can. You’ll be able to take in the view from most of the tables.

Particularly worth trying are the outside tables on the balcony – where the clay oven is based and occasionally some outside grilling takes place there too. It’s not heated, so perhaps only suitable for lunch, but we’d definitely pick that if we were going on a hot summer’s day (if we ever see one of those again...)

The Dock Kitchen menu is divided into two sections – the regular a la carte with a wide selection of ever changing dishes (alongside some house regulars) or the seasonal set dinner menu of the time. On offer during our visit was a Keralan menu – but future special menus to look forward to include Wild Spring as well as plenty of guest chefs popping in. We did try a couple of items off this – namely the langoustines, both raw and cooked. The raw ones were a culinary challenge - so fresh that despite being cut in half they were still twitching - but then they did taste good!

But for the rest, we opted for the traditional a la carte and weren't disappointed. We specifically tried some of the dishes that tend to stay on the menu - the first being the chicken livers cooked in seven spice and pomegranate molasses with a lavish bread. And we could see why it remains on the menu. Rich and creamy - this was great wrapped in the flatbread and wolfed down. Another great starter was the deep fried courgettes with almond skordaila - light, wafer-thin battery slices of courgettes dotted with tiny jewels of chilli. We also made room for the Norfolk cod roe on toast with raw beans, broad beans, dill and crème fraiche which was a clean, refreshing taste of spring produce.

Next up, we were treated to an unordered dish (yes, we're gluttons, it's true) – another of the house specialties, the Lamb Biryani with rose petals, black cumin, coriander and almonds cooked in a clay pot sealed with salt dough. Extremely delicately spiced with melting lamb and fluffy rice - it went well with the garnishes provided including rose petals and pomegranates. It’s a dish that has to be shared by two people minimum but it’s worth making the trip to the Dock Kitchen for this alone.

Finally we finished up with slow cooked pork shoulder in volpaia chinanti, vinegar and tomatoes with aubergines and courgettes and also the chargrilled lamb chops with okra and potatoes naxos.  Both were Mediterranean in influence and again easy recommendations. It’s worth noting here that the portions are extremely generous – you could order a side of mixed green salad, but it’s really not necessary.

Finally, we finished up with some excellent salted caramel ice cream – with a wonderful burnt caramel taste and a sticky .

Yes and it's great. Every table gets some excellent flatbread delivered as you sit down – essential for mopping up every drop of your food, so don’t scoff it all immediately.

It’s a short but interesting list – wines start at £18 bottle/£4.50 glass with natural wines highlighted as they appear. Our favourites were the Fred Loimer Gruner Veltliner (we’re slightly addcted to Gruner) and the Palazzo della torre Veneto.

We’ve been meaning to come to the Dock Kitchen for such a long time, having heard nothing but praise since it opened. It’s occasionally hard to live up to such expectations, but here they were easily met. It’s easily been one of our top meals this year and we’d strongly recommend anyone paying a visit at least once.  Of course, then you’ll want to come back again and again...

Hot Dinners were invited to eat at the Dock Kitchen.  Prices were correct at time of writing.