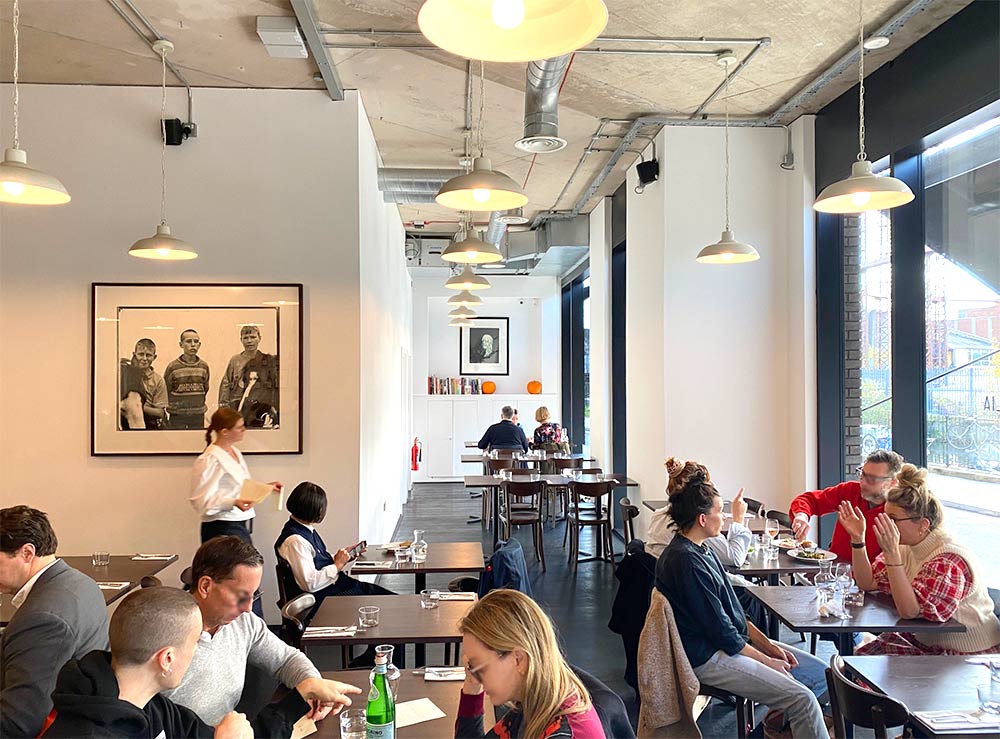 Inside Cafe Cecilia. The open kitchen is off to the left and the windows face the canal. It's a lovely spot.

What can you tell us about Cafe Cecilia?

This is the first solo restaurant for Max Rocha, a chef who has previously been at both St John Bread & Wine and The River Cafe. There are two specific similarities between Cafe Cecilia and the River Cafe - it's very much a proper restaurant as opposed to the café suggested by the name and it's also waterside.

If the chef's name sounds familiar, it's because he's also the son of fashion designer John Rocha and brother of Simone Rocha, also very much making waves as a designer (apparently the family has been giving a lot of help and feedback in the project).

You'll find it by the canal in Hackney in a new-ish building called Canal Place. It's just a few minutes walk from Broadway Market, which is very handy for a spot of pre/post-meal shopping.

Inside, you can see that it's had a designer or two's eye on it. There's a pared-back look, with a few well-placed black and white portraits. It's mainly open for lunch (with dinner having just launched on Friday and Saturday for the moment) and the high-ceilinged room is bathed with light from the front. On top of that, it's a very convivial space (it gets booked up fast).

The menu is very much an ever-changing affair, split into two parts. First off, there's the main menu that features a collection of snacks and small plates.  Then there's an extensive specials board where you can find even more dishes alongside some larger sharing plates (there was an aged wing-rib for 2-3 people on our visit).

We can see influences here from the two former restaurants Rocha's worked at. The seasonal plates certainly have a St John influence, and there's pasta that showcases what an ex-River Cafe chef is capable of. On top of that, there's also the odd sprinkling of influence from his Irish roots.

Here's a taster of what we had: 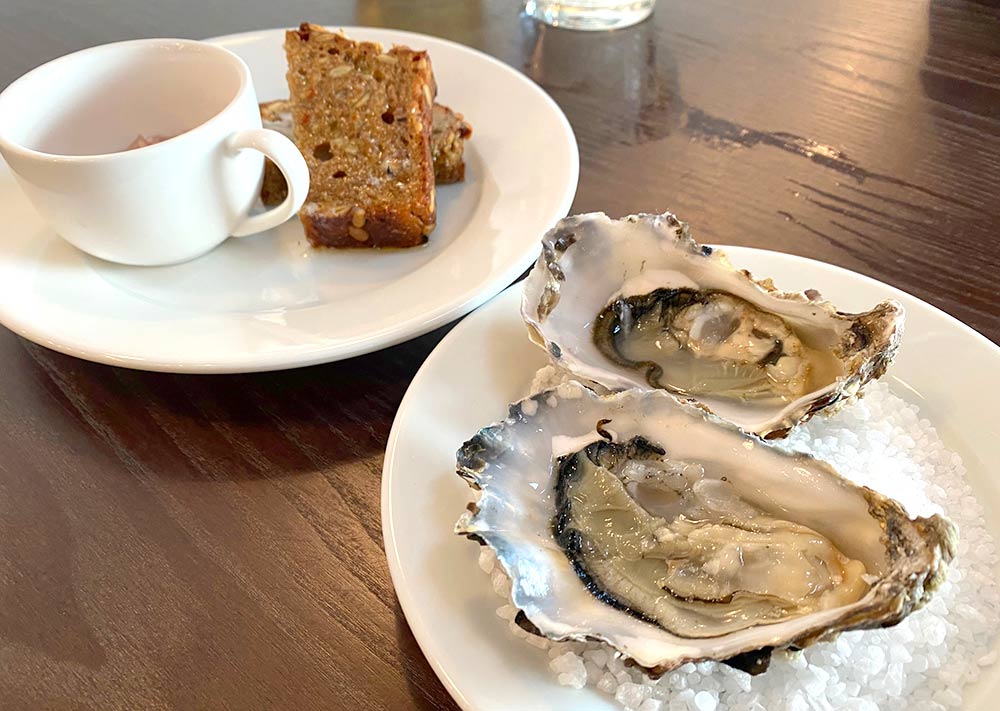 Oysters and Guinness Bread (£7.50) - The Guinness bread has become a cafe Cecilia staple, so get this if you can. It's the perfect snack to kick off the meal. 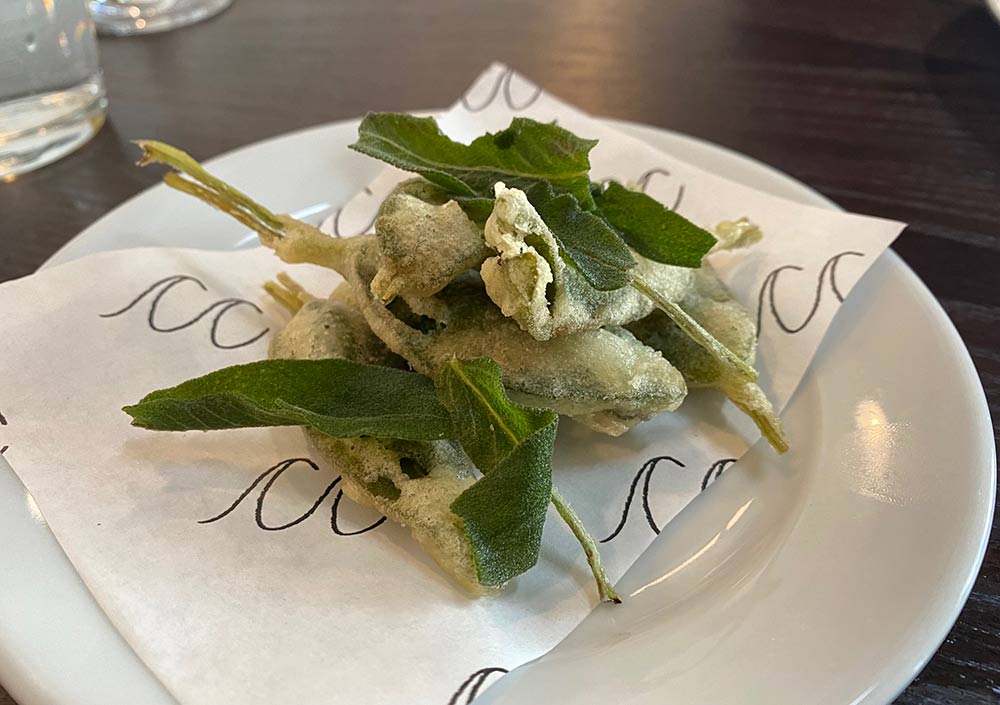 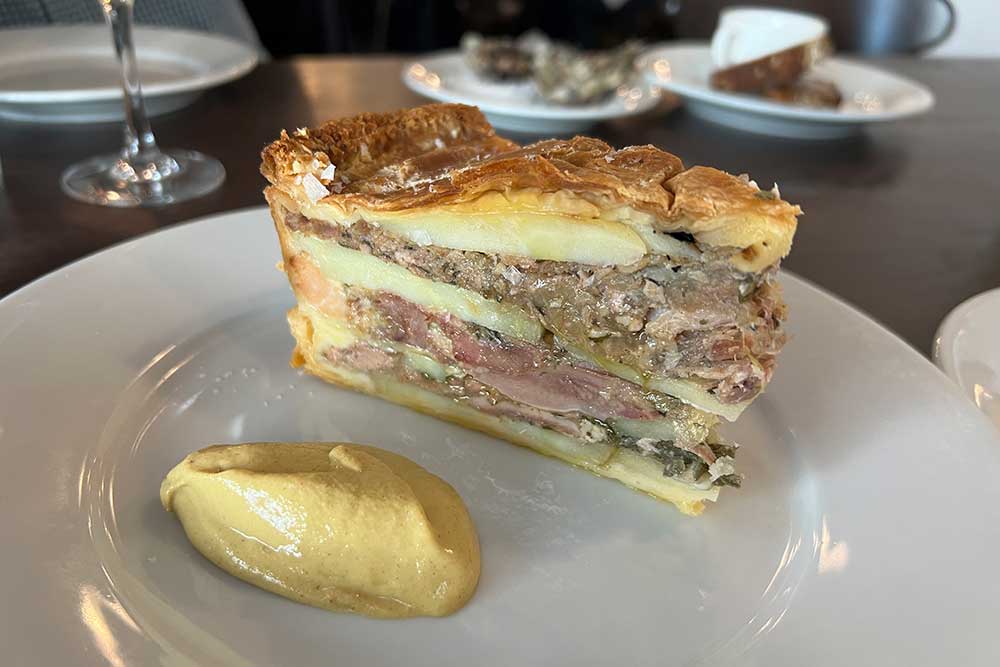 One of the specials - pig's head and potato pie with Dijon mustard (£10.50) - absolute pie perfection. A must-order if you see it on the menu and we think it should become a staple. 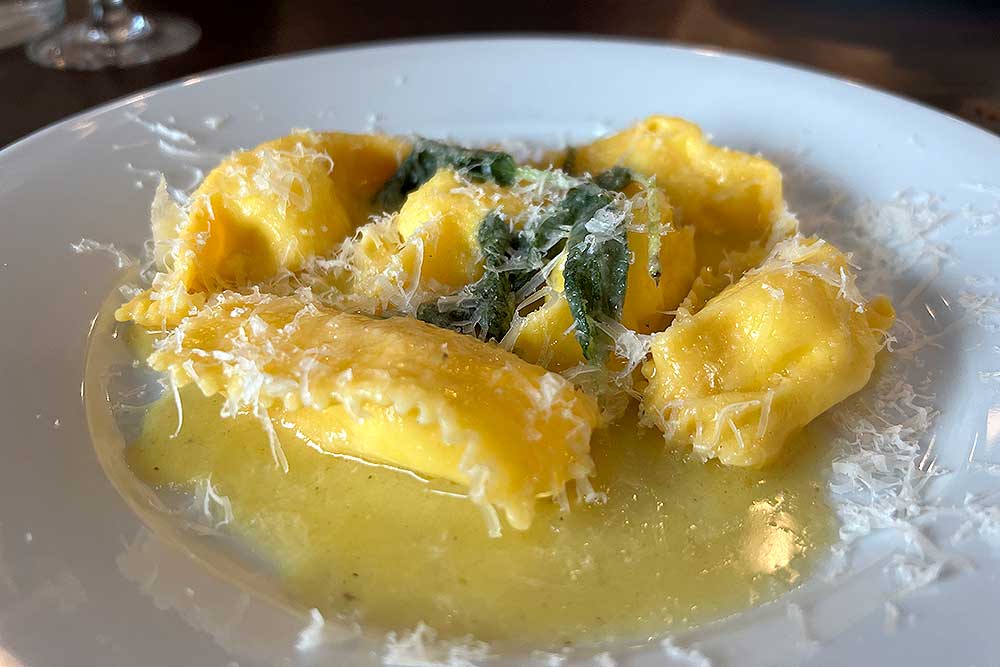 Another special - Ricotta agnolotti with sage butter (£12). Certainly one of the best pasta dishes we've had in London for a good long while. 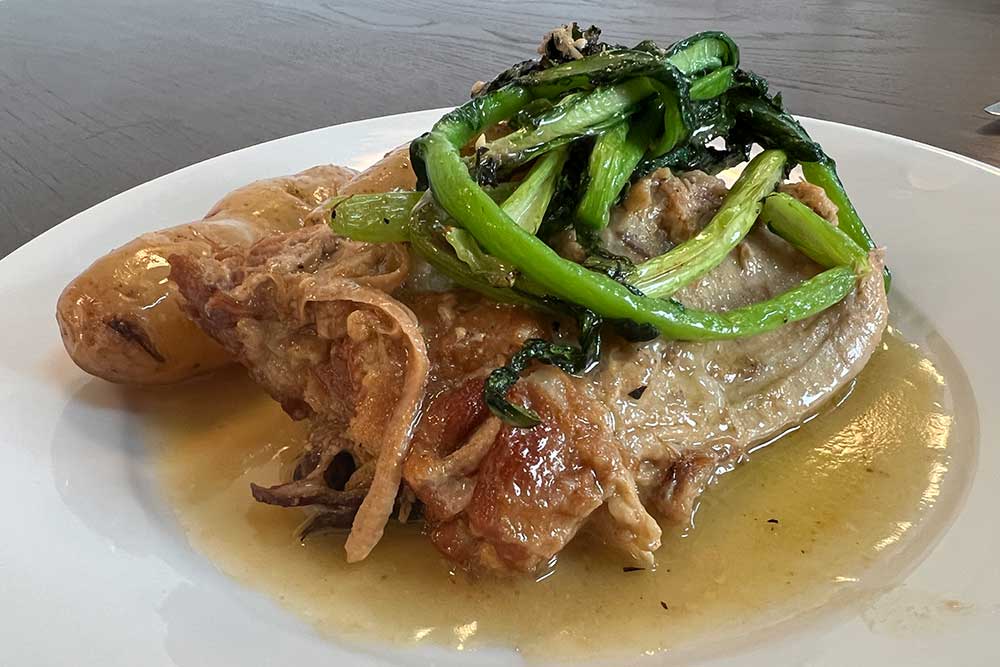 Pork braised in milk, lemon and sage with pink firs (£18) - another barnstormer - the pork tasted amazing, unlike anything we've had elsewhere recently.

We'd say to order and make sure you've left room for at least one of the desserts as both of the below were excellent (and their stracciatella ice cream sounds good too). 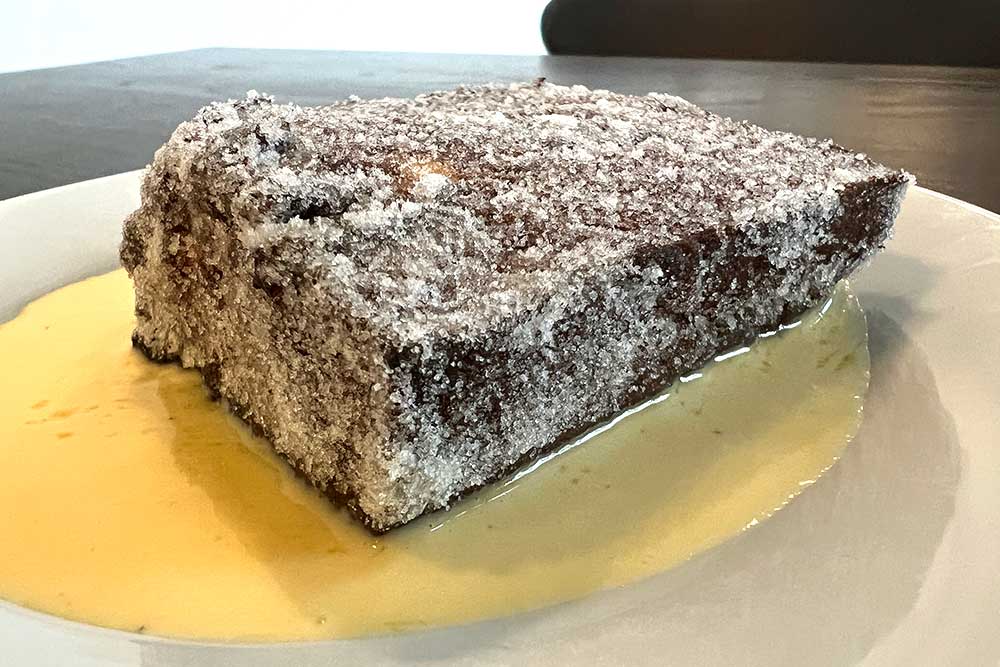 Deep-fried bread and butter pudding with cold custard (£8.20) - I mean how could you avoid ordering this when you saw it on the menu? Crunchy caramelised outside and dammed good custard all combine to make this a top tier dessert. 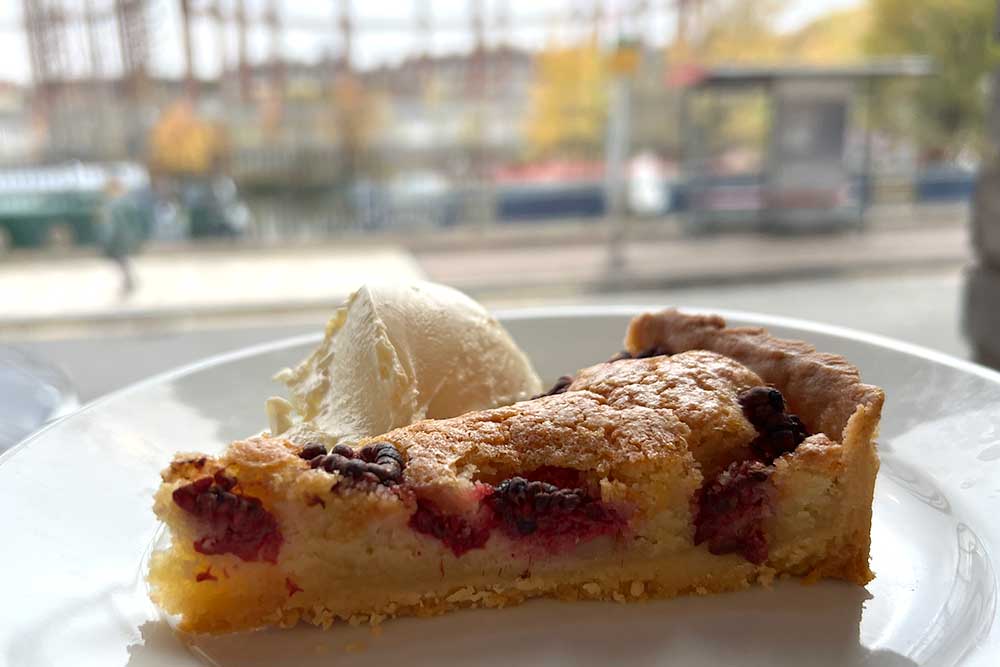 Anything else to mention on the food front?

A staple on the menu is the onglet, chips and peppercorn sauce (£22) and other dishes on the board include a cheese and pickled onion toastie (£10) and a lamb leg with chicory, dandelion and anchovy (£19) - all things we would happily have ordered.  Essentially - it's a great menu and really delivers on its promise.

On top of that, we're hearing very good things about breakfast too.

There's a one-pager wine list with a fair amount available by the glass and carafe (essential for a place that's predominantly lunch as it is at the time of writing). The entry pieces are £5 a glass/£30 a bottle for an A&D wines Vinho Verde, which should match well with much of the menu, and on the red side a 2018 Eschenhof Holzer Wagram at £34 a bottle. There's also a small cocktail list where you can grab a negroni (£10 or a White port & tonic (£8.50).

Outside of write-ups in The Standard and Vogue (there's quite the fashion crowd here - we should have given more thought to our outfits), Cafe Cecilia has so far flown a little under the radar. But this is, by a country mile, one of the very best London openings of the year so you can expect word to get out. We had a pitch-perfect meal which has left us immediately thinking about plans to return. Max Rocha's cooking is absolutely something to cross town for and there's a great cool vibe/buzz about the place. All that and the prices are pretty good too.

Very highly recommended - book a table now while you can.

How to book: book on Resy