[SIGPLUS_EXCEPTION_SOURCE] Image source is expected to be a full URL or a path relative to the image base folder specified in the back-end but /blog/2013/ritas/gallery is neither a URL nor a relative path to an existing file or folder.
0
Shares

Buttermilk chicken and much more - we Test Drive the rebooted Rita's 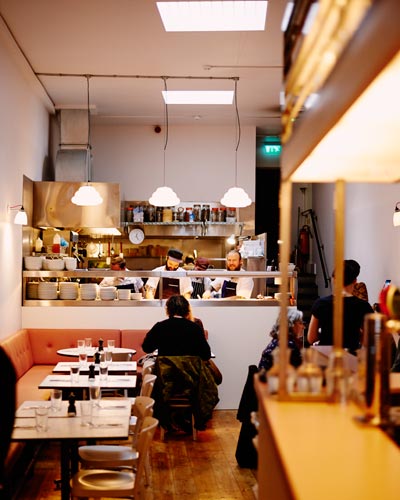 What can you tell us about Rita's?

Rita's Bar and Dining was originally launched mid 2012, in a residency at Dalston's Birthdays. It immediately won a large amount of fans, including a rave review from Fay Maschler, for its chicken, tacos and some excellent beef patty sandwiches that we were particularly fond of at the time.

Its residency came to an unwelcome end, but Rita's has now resurfaced in Hackney. This time it has its own, permanent site and will be a permanent addition to the area (lucky Hackney folk).

Where has it settled down?

It's half way down Mare Street, right next door to the Dolphin pub (which is home to one of our favourite Twitter feeds). It's just around the corner from London Fields station and about a 10 minute walk from Hackney Central.

The new place is a much bigger space than they had before, with room to grab a drink if you're waiting for a walk-in table, It's worth mentioning that this time, Rita's is taking bookings too.

It's definitely skewed to a younger East London crowd, but was still considerably mixed on the night we were there. Don't come in here for a quiet drink - it's best with friends who will be willing to share some of their meal with you. Because you're going to want to order as much of the menu as you can.

The aforementioned Dolphin pub is the nearest boozer we'd recommend and the London Fields is also worth checking out (but not if you're after something quiet). There's also a small bar at Bouchon Fourchette a few doors down. And you're also about a 10 minute walk from Broadway Market with plenty of drinking spots to check out before or after there.

Where I should I sit?

If you're with a big party, the downstairs private dining area is for you. And we did think the back of the restaurant was calmer than the front - but other than that, all the tables looked more or less equal to us. You'll be fairly (but not too) close to other diners - so be prepared for food envy, which brings us to...

Rita's is, to start with, probably best known for its buttermilk fried chicken - making a main appearance here as a half chicken served with warm honey and sausage gravy. But while we see what the fuss is about - we would suggest exploring the rest of the menu first, particularly if you've been to the original Rita's.

Beyond the chicken, we discovered some truly excellent dishes, This started with the special of the day - beef tartare with ponzu and fish sauce, a dish with amazing flavours and easily one of the best steak tartares we've ever had. If this is on offer - then snap it up immedietely. The pork belly with black vinegar was also astonishingly good - a portion of sticky chunks of pork belly that we should really have ordered two of.

We rounded things off with the spiced noodles with pig's head ham but, reviewing the menu again as we write this, there's so much we want to go back for. We wish we'd ordered the meatloaf with onions, the chopped crispy duck with mooli slaw and hoisin mayo sounds amazing and, though we've had them before, we'll definitely get the soy ginger hot wings next time.

A special mention for the side too - particularly for the crispy fries crushed potatoes. These were awesome.

But whatever you order, ensure you make room for dessert. Specifically for the beignets served with dulce de leche - £4.50 which goes up to £5,50 if you add the all-important ingredient of foie gras. Despite pigging out before we got to this point, we were left immediately wanting more. It's bound to be the one dessert that everyone has to order when coming to Rita's.

What about the drinks?

Don't leave (or start) without trying a cocktail - particularly the signature frozen 'rita - all around the £6-£7 mark and well worth it. There's a short but impressive wine list too - ranging from £22 - £32.

Ever since we heard that that Rita's was returning, we've been itching to pop along. It's easily one of, if not the, most fun restaurants in the area and definitely worth a trip across town to visit. Bring lots of people, order the entire menu and we guarantee you'll have a good time. Great food, lovely atmosphere - Mare Street is very lucky.