[SIGPLUS_EXCEPTION_SOURCE] Image source is expected to be a full URL or a path relative to the image base folder specified in the back-end but /blog/2012/north-road/gallery is neither a URL nor a relative path to an existing file or folder.
0
Shares

Burning the hay - we take a cooking lesson at North Road 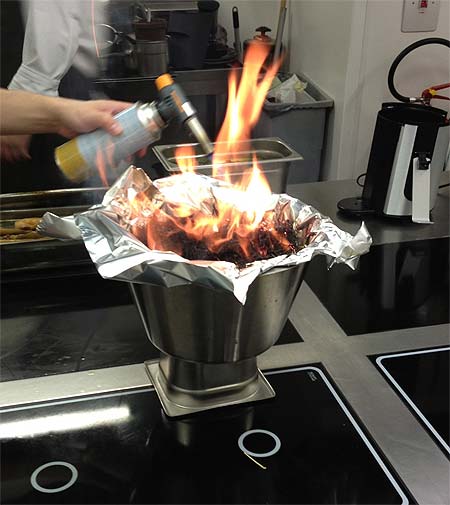 What can you tell me about North Road?

North Road is the Danish restaurant in Shoreditch headed up by Christoffer Hruskova and proud owner of a Michelin star that it won in its first year in business. It specialises in the food you'll have been reading a lot about from Noma - focusing on doing something special with fresh, foraged ingredients. We tried it out shortly after it opened and were quite impressed.

So, what has brought you back to the restaurant?

This time, rather than just sitting in the dining room (although we had that too - more in a bit) we popped along to North Road to take part in the first of an ongoing series of cookery classes. It was an opportunity to get stuck into things in a Michelin-starred kitchen and help make some of the restaurant's top dishes.

What exactly do you get to do?

The class takes place on a Saturday - with no lunchtime service there's plenty of time to get things ready for dinner.

After a quick coffee to get thing started (and some great fresh pastries from the kitchen) we were split into groups - one covering starters, one for the main and one for dessert (which is where we ended up). Once in the kitchen, you're given your chef's whites and the recipes in a notebook which you can make copious notes on. And we'd definitely recommend making notes as you go along as there were a number of tips and tricks we picked up on throughout the day. For instance, we particularly liked the idea of wrapping the veal in clingfilm, cutting it and then searing it to keep its shape before the clingfilm was removed.  This is no doubt an old chef trick, but not something that your everyday punter would be aware of.

Each team was in charge of preparing and cooking their course - ours was pear terrine, with caramel parfait and baked salted mousse. We learned a heap of stuff, and loved the opportunity to use the vacuum packing machine to compress the caramel poached pears together and maximise the flavour.

But just because you're on one course doesn't mean that you can't move around and follow the rest of the action - whether it's baking the beetroot in dough, preparing edible soil or setting fire to hay to both smoke quails eggs and coat the venison in. It was a truly fascinating day and we were left coveting various items in the kitchen - particularly the candyfloss maker (more of that in a bit, too).

So how did the creations turn out?

Once finished in the kitchen, we were treated to a glass of champagne and the first fruits of our endeavours - smoked quails eggs. This was followed by everything we prepared earlier on:

The one thing we didn't do (and we'd really suggest they consider at least allowing this in future classes) was the plating. So while we ate everything we cooked - the last stage was handled by the experts and everything looked beautiful and, of course, tasted great. It was another opportunity to see what North Road could do and we think it's improved since we were there last - the venison course in particular was worth returning for. As was the pine candyfloss perched on tree that rounded everything off (see the gallery below). Yes we really wanted that machine.

I'd fancy giving this a go - how much would it set me back?

Overall - with three hours in the kitchen and the three course wine-matched meal to follow - the cost is £150, which we think is fairly good value for a half day cooking course and Michelin-starred food.

How to book: Everything starts at 9.30 am for tea/coffee and pastries followed by class at 10am and lunch at 1pm. The next class will be on 28th April and the main dish will be Native lobster from Christchurch Bay (Dorset). The next two classes after that will be 26th May & 30th June. If you fancy booking or would like more information, email claire@nrrestaurant.com or call on 0203 217 0033.

Find out more about North Road

Hot Dinners were invited to the cookery class at North Road. Prices are correct at the time of writing.