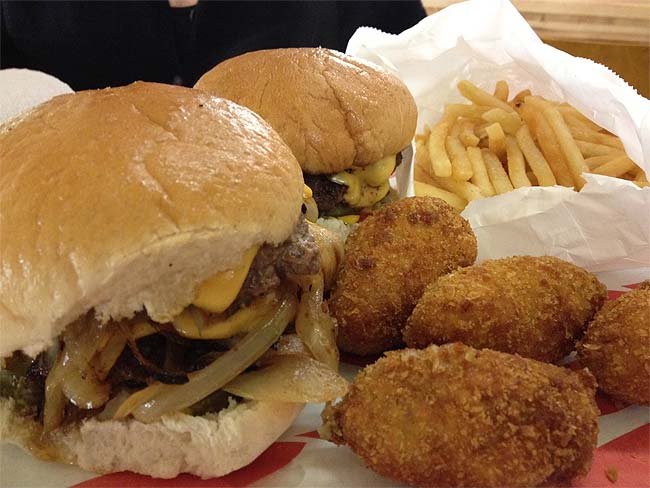 What can you tell us about MEATmarket?

Put simply, it's the latest venture from Yianni Papoutsis and Scott Collins, the people behind Meateasy and one of the biggest launches of 2011, MEATliquor. Carrying on the burger theme, you can expect some of the best burgers in town, but with more of a focus on getting people in and out - so perhaps with less of a queue.

Set at the back of Covent Garden's Jubilee Hall Market, MEATmarket takes over the balcony area overlooking the trinket sellers below. The best way to get to it is from Tavistock Street where it has a dedicated entrance. Don't try to fight your way through the main market and the weekend crowds - we've already made that mistake so you don't have to.

So how it it different to MEATliquor?

The main difference between this and MEATliquor is the emphasis on speed. Yianni told us he's going for a "convenience not fast food" approach, so while MEATliquor's queues were a both a symbol and symptom of its success, MEATmarket has been designed to let you get in, devour your burger and mone on.

So while the food's marvellous, the set up is much more akin to a fast-food store - queue up at the till, order your burger and either grab a stool to devour yout meal on the premises or take it away with you. So yes - take away options will be available if you can't wait for a seat and the weather ever improves enough to allow outside eating.

So will there still be queues?

Inevitably, but Yianni also told us that each burger takes about five minutes to cook (every burger is cooked fresh) and they've specifically gone for smaller patties in double burger style, in order to shift the queue along. Five minutes is about the same length you'd be waiting for a Shake Shack burger in New York and it's well worth the wait for these burgers.

The entrance to MEATmarket is also up a flight of stairs (see the gallery below), so in most cases we don't think you'll have to wait out in the rain.

As mentioned, the burgers will strictly be double-patty affairs, so there's the Dead Hippy and Double Bubble from MEATLiquor and a new addition, the Black Palace burger - a two patty burger piled high with grilled onions. The Philly Cheesesteak also makes the journey from MEATliquor.

We tried all but the Dead Hippy and both were just as good as the burgers from MEAtliquor - and therefore easily the best burgers in the area.  All can be accompanied by fries or poppas (breaded, deep fried jalapeno peppers).

Also on the menu are a range of hot-dogs - The Ripper, the Kraut and a corn dog.  Alas, only the first was ready when we visited during their trial phase but hey - that gives us all the more reason to go back.

And what about drinks and desserts?

This is where MEATmarket is trying something really different. They've invested in an industrial soft-serve ice cream machine and are working with the manufacturers and Ice Cream Union to adapt it to produce a soft-serve that is closer to traditional ice cream than ever before. It's pitched as a half-way house between soft-serve and frozen custard. In addition to this, each ice-cream can be serves with an optional shot of Jagermeister - for the ultimate in soft ice cream toppings. The machine was yet to be installed when we arrived - but again, that's another reason for us to go back.

As for the drink, alongside beer and a bottomless soda fountain, there are a range of alcoholic milk shakes on offer too. The cocktails have been specifically chosen to work particularly well as milk-shakes (i.e. aleady have some element of milk/dairy in the traditional recipe such as a Brandy Alexander). There is, of course, free "government juice" (water).

So when should I go?

MEATmarket will be open seven days a week, from 12-11pm. So it's essentially worth popping by if you're ever in the area, but particularly if you fancy a quick post theatre bite without being forced into a fast food outlet. We reckon the queues will be far quicker than MEATliquor (although maybe not in the first couple of weeks as word gets around). We'll definitely be back for the ice-cream and dogs.

MEATmarket is inside the Jubilee Market Hall in Covent Garden, with an entrance on Tavistock Street. Find out more

Hot Dinners were invited to eat at MEATmarket. Prices are correct at time of writing.