Brixton dining with a difference - we check out Salon 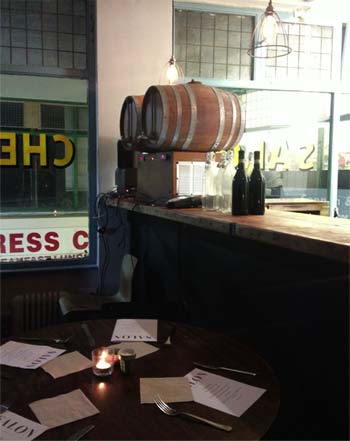 Salon is a restaurant we've been keeping close tabs on since we spoke to Head Chef Nicholas Balfe about the opening last month and it immediately struck us as one-to-watch. This weekend we had an opportunity to try out this new restaurant from the ex-Head Chef of much-lauded Bruswick House Cafe and we had a lovely night out there.

It was a soft launch, so we'd expect a few things to be ironed out before the launch on Thursday December 6, but we were already impressed with what they'd managed to do by their second service. Salon is above Brixton's Cannon & Cannon deli on Market Row, just around the corner from current Brixton fave Wishbone. It's a small restaurant above the shop, seating about 25, and features the kind of menu that you'd be familiar with if you'd dined with the Young Turks. So there's a set menu of four courses for £29, with an aperitif thrown in too. When we were there on Saturday, that was Prosecco with quince puree.

As with Upstairs at... the set menu allows the kitchen here to produce a menu that wouldn't be possible if they stuck to a la carte. The full menu can be seen in the gallery below, but we loved every bit with standouts being the marvellously gamey pheasant served with savoy cabbage and creamy celeriac mash and the deconstructed quince syllabub for dessert. Drinks were priced well too with house red/white starting at £13 a bottle and we liked the touch of "Davy's wine of the month" from next-door Market Row wines. We had a Three Choirs English pinot noir which was really good.

Salon opens on December 6 and - at time of writing - there's still space for next weekend. Go, dress warmly (although we're promised heating will be in place on opening!) and you'll have a great time.