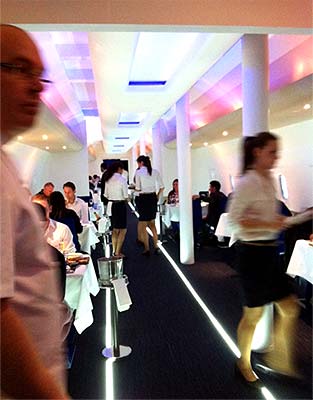 Shoreditch was buzzing last night for one of the first nights of the British Airways pop-up dining lounge Flight BA2012 which fuses art, cinema and food. Open until April 17, the gallery, cinema and dining lounge features the work of three competition winners who've been mentored by Heston Blumenthal, Tracey Emin and Richard E Grant.

While anyone can come in and drink at the bar or view the specially commissioned short film in the cinema (starring Timothy Spall and well worth watching), the restaurant bookings sold out in just three hours. That said, we hear they're trying to move heaven and earth to extend their stay a bit - so watch out for announcements after Easter weekend.

Lucky old Hot Dinners managed to nab a table in the restaurant which was kitted out to look like a airplane cabin. So there were porthole windows screening videos of clouds passing, a central aisle with lighting, and our waitresses were all British Airways cabin crew.

The menu comes courtesy of Michelin-starred chef Simon Hulstone (who'll be in this year's Great British Menu and runs the kitchens at the Elephant in Torquay). Hulston's been working with Heston to come up with an umami-rich menu that will be served up to diners at the usual cruising altitude of 30-40,000 feet in First, Club and World Traveller classes. The final dishes were also influenced by British Airways menus from 1948 when England last held the Olympics.

The meal kicked off with a amuse-bouche of salmon tartare, chopped up with cucumber, red onion and topped with sour cream and caviar - plenty of contrasting, but not conflicting flavours - to get an appetite going. We eschewed the starter choice of rillette of Brixham mackerel with dashi jelly or salad of golden beetroot with pepper goats curd and instead asked to try the vegetarian main course as a starter. This was a poached duck egg with gruyere cheese and tapioca with roasted onion consomme poured round it - if they manage to serve this to the same standard in the air it'll be incredible.

Our main was braised beef cheek topped with horseradish mash. Hulstone explained that he'd picked beef cheek partly because it retained moisture when reheated, meaning it'll taste so much better than other cuts when you're in flight. Despite being as stuffed as a pig by this stage, we still managed to scrape the plate clean when it came to desserts - our chilled chocolate fondant sat on a praline base with a soft salted caramel centre was a barnstormer of a dish - utterly amazing.

If all this has got you pea-green with envy because you didn't manage to book, we have good news - most of these dishes are served in tasting size form in the bar which you don't need to book for. There are two tasting platters - each costing £10. So you can pick the starter selection, which includes that salmon tartare, rillette of mackerel and golden beetroot salad, or the dessert selection which features the chocolate fondant, lemon curd cheesecake and petit fours.