[SIGPLUS_EXCEPTION_SOURCE] Image source is expected to be a full URL or a path relative to the image base folder specified in the back-end but /blog/2014/brooklynbowl/gallery is neither a URL nor a relative path to an existing file or folder.
0
Shares 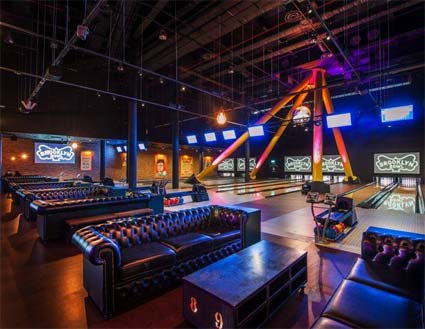 What can you tell us about Brooklyn Bowl?

The original Brooklyn Bowl – slap bang in the middle of Williamsburg – is one of New York’s most celebrated hipster hangouts, featuring live music, a restaurant and, of course, bowling. It’s proved an incredibly successful formula, so it’s no surprise that this new London outpost is almost a carbon copy, with a dedicated restaurant area, twelve bowling lanes and huge gig venue; even some of the extremely friendly staff have been bought over from Brooklyn. Rolling Stone called the original “one of the most incredible places on earth” – no pressure here then.

Brooklyn Bowl has set up shop at the O2, perhaps not the most obvious place for somewhere hoping to cater to London’s own hipster crowd, but presumably this was the only place that had enough space to match their ambitions.

Those familiar with the O2 will know that drinking options here aren’t hugely varied - it’s like a Disneyland for chains so expect everything from Slug and Lettuce to, er, TGI Friday’s. You should, therefore, head straight to the bar at Brooklyn Bowl for a pre-dinner cocktail.

What’s the best place to sit?

There are two entrances to Brooklyn Bowl – one takes you straight into the restaurant area, while the other leads you to the huge space housing the stage and bowling lanes. The restaurant is set up like a classic American diner, with a collection of booths along the walls and smaller tables in the middle of the room. It’s all perfectly nice, but we’d recommend grabbing yourself a booth if you can. Alternatively, you could head straight to the lanes, where you can order from the full menu and bowl while you eat.

Just as every other element of the venue has been imported from the Brooklyn original, so has the menu, which in both cases has been devised by New York restaurant group Blue Ribbon. The menu is made up of the kind of American comfort food classics that we’ve become very accustomed to in London lately – think fried chicken, ribs, and burgers, plus the odd salad for good measure.

We tried a good selection, including pulled pork sliders (3 for £10), mac and cheese (£9), “Rock ‘n’ Roll” fries (£9), a huge platter of fried chicken (£21) and, yes, even a Greek salad (£8). With the undying trend for gourmet dude food, Londoners have been spoilt with gourmet interpretations of these dishes for the last few years now and unfortunately nothing we tried at Brooklyn Bowl is going to give places like Pitt Cue Co or Chicken Shop a run for their money. The best thing we tried were the fries, which were transformed from a mere side dish into a mighty meal with a gloriously-bad-for-you topping of melted cheese, Cajun spices and gravy. Other dishes weren’t bad but we’ve come to expect a whole lot more from upmarket fast food these days so it feels a bit of a missed opportunity.

Unsurprisingly, Brooklyn lager features prominently on the beer menu but it’s also nice to see Meantime’s London lager on there which is brewed just down the road from the O2.

A very well stocked selection of whiskeys, vodkas, tequilas and rums mean that this is where the fun really starts. We tried some great cocktails too including a classic Negroni and frozen margarita.

While it’s hard to recommend visiting Brooklyn Bowl for the food alone, what we can do is recommend it as a really fun night out. So head straight for the lanes, order some cocktails and sharing plates and you’ll be on to a winner in no time.

Prices were correct at time of writing. Hot Dinners ate as guests of Brooklyn Bowl.