[SIGPLUS_EXCEPTION_SOURCE] Image source is expected to be a full URL or a path relative to the image base folder specified in the back-end but /blog/2014/houseofho/gallery is neither a URL nor a relative path to an existing file or folder.
0
Shares

What can you tell us about House of Ho? 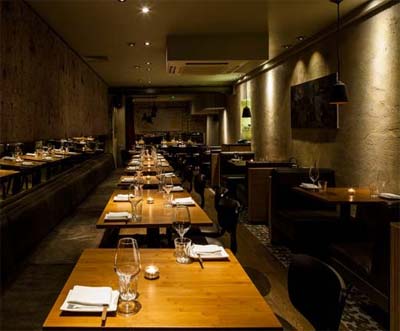 While perhaps not quite as well known in the UK, Bobby Chinn has had a few shows on American cable TV. He already has successful restaurants in both Hanoi and Saigon and he's the latest chef to realise that London is the city to open in. Which is where House of Ho, an informal Vietnamese restaurant in Soho comes in.

It's right in the heart of Soho on Old Compton Street, just a few doors down from Soho Kitchen and Bar (formerly Soho Diner). It certainly takes advantage of its location with a fairly tongue-in-cheek menu (referring to the lack of MSG in the food it says "we may be hos, but at least we're classy ones"). The nearest tube station is probably Leicester Square.

There is standing room at the bar if you fancy meeting there (on the night we went, it was packed with plenty of people drinking and waiting for tables) and as you're in Soho, there are dozens of places to meet nearby. Of the ones that are nearest, we'd probably recommend a quick pisco sour at Ceviche.

We sat in probably one of the best tables the house - a seat for two right by the front window, perfect for watching Soho in all its glamour and grime parading by. There are two of these seats available so definitely grab one if you can. The dining room is split roughly into two rooms in front of or behind the bar. We marginally preferred the front room but it's nice to see that the tables are well spaced, so there's no danger of encroaching on your neighbours wherever you sit. There's a particularly useful semi-private table at the back which looked to seat around 10 which can be curtained off if you so choose.

We ate our way through the menu, which is split into "light and raw", "hot and grilled", "ho's dishes" (mains), "communal" (sides) and -ahem - "Happy Endings" (that'll be the desserts).

Overall we were pretty impressed - although we did note it was very light on "bite", so those expecting anything a little more fiery might be more disappointed. We started with the duck rice noodle rolls (5 for £5) and a fresh crab and pomelo salad that single-handedly tasted like it would do for your five a day in in one dish. The apple smoked pork belly with braised cabbage and egg (£11) was also very good.

However it's worth highlighting a couple of the other dishes too - particularly the smokey aubergine, warm scallion vinaigrette and crispy shallots. This dish has been dividing critics, probably on account of texture, but we came down firmly in the pro lobby; the intense smokiness and silky aubergine worked really well. With lots of dishes arriving at once, make sure you don't let this one cool - it needs to be pretty hot. And then there's the lemongrass monkfish with a fish caramel sauce. This is a dish that really heralds its arrival with a pretty whiffy aroma (a result of the fish sauce and caramel). But it tastes great.

And those "happy endings"?

We tried a particularly well made molten marou chocolate cake (£6) and the more traditional gluten free corn coconut che. This latter dish was the one thing on the menu that we really didn't warm to at all - although this may be due to our aversion to peanuts and not realising quite how many would be heaped on top of the dish.

Kicking things off, we tried a prefectly good Hanoi Martini (Kahlua, vodka, vietnamese coffee and carnation milk) at £8.50. Not something to have too late in the night. There's also a small selection of sake on the menu (but we didn't tackle that).

As for the wine list - there are about 15 reds and whites on the list grouped together so you can decide how heavy or light you want to go. However, this short list doesn't come cheap. The lowest priced wine is £21, but it leaps up to £27 from there on the list of whites. The reds are a little more forgiving with bottles at £24 and £26 but in all it does seem very much on the pricey side - particularly when compared to the cocktail list and food prices.

Another pre-Christmas opening, House of Ho was busy when we visited on a Thursday evening at the tail-end of January. The place is buzzy, has some decent Vietnamese food on offer and should do very well in the area. We'd like a bit more give in the lower end of the wine list, but think that any fans of Bobby Chinn will be happy here.

Prices were correct at time of writing. Hot Dinners ate as guests of House of Ho.