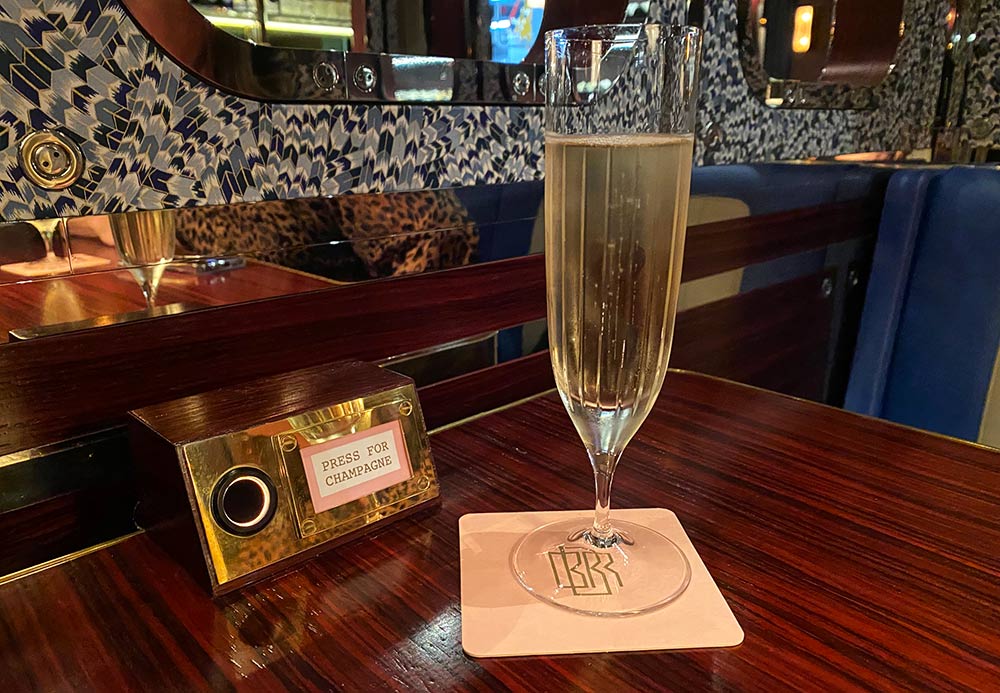 Yes, you have to press this at least once.

What can you tell us about Bob Bob Ricard City?

Closed for most of the pandemic, this City sibling to Bob Bob Ricard in Soho was originally launched as Bob Bob Cité in mid-2019. At that time, while there were some holdovers from the original Bob Bob, Cité sought to do its own thing with a look that was quite distinct from the original. As we described it in our original Bob Bob Cité Test Drive - "Think luxury superyacht meets The Orient Express."

But things have changed for this revamp?

They have. First up, there's been a name change - it's now Bob Bob Ricard City. That alone hints at some of the other changes - there's been a shift to make the City version a little more like its Soho sibling.

To that end, the "press for Champagne" buttons are in place, looking just like Soho's and there's been a general warmth brought back into the rooms (more dark wooden panelling and dark wood tables, for example). The effect is subtle but works - it has definitely become much more recognisable as Bob Bob Ricard.

Remind us where we can find it?

It's part of the Leadenhall Building in the heart of The City (about a 5-10 minute walk from Liverpool Street station). Look out for the glass-walled lift at the front of the building that will take you right up to the restaurant. 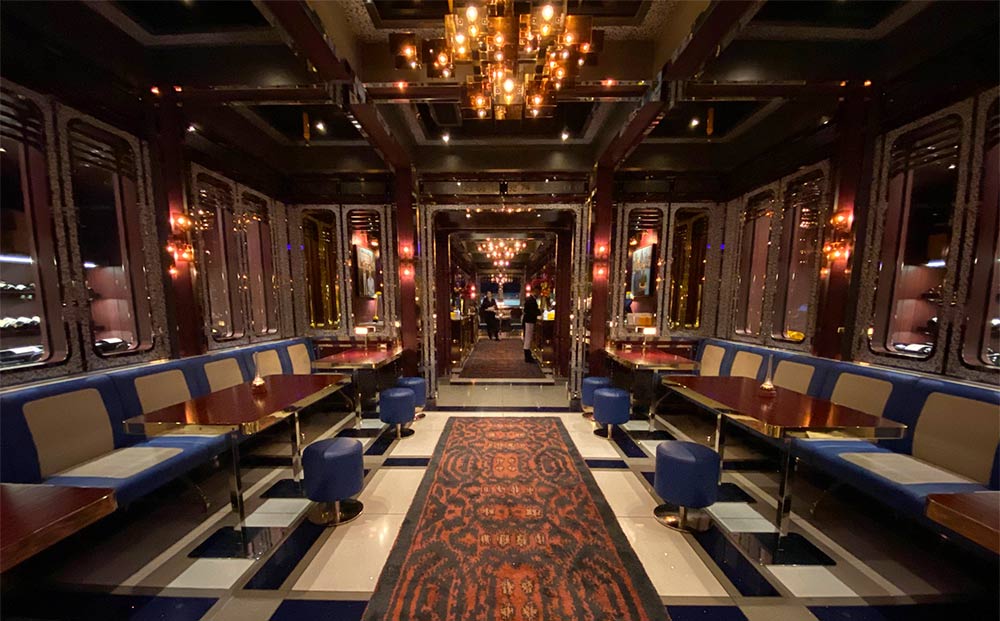 The revamped bar - new tables are in place here among other changes (including that rug).

So - start with a little "Press for Champagne" action?

It's definitely worth stopping at the bar, both pre or post-dinner and yes, we'd say a glass of Champagne is a must - mainly as it gives you an excuse to press that famous button. When you do, keep an eye out for the LED numbers at the top of the walls - they let everyone know about your urgent Champagne need. Glasses start at £12.50 (Moet Brut Imperial) up to £26 for Dom Perignon Vintage 2012.

If you're willing to go for a bottle and head further down the list, something that's very much in your favour is their maximum £50 mark-up on wines and Champagnes. Looking online for the aforementioned Dom Perignon, the cheapest bottle we could find it to buy in a shop was £155 - while you can actually order a bottle of it in Bob Bob Ricard for £156. So if your budget is decent - and this is The City after all - there's value to be had in the higher echelons of the list, much more so than at other high-end restaurants in the area.

Onto the restaurant itself, what's changed?

Apart from the already mentioned look, there's been a shift in the menu to be closer to the original Bob Bob Ricard, with more of its classic dishes making their way to the City. So the Russian dumplings, lobster macaroni cheese and more all make an appearance here as does the chicken and Champagne pie (as well as the vegetarian "Humble" alternative). Overall, the menu has a strong French-crossed-with-Russian vibe.

Here's what we had on the night. 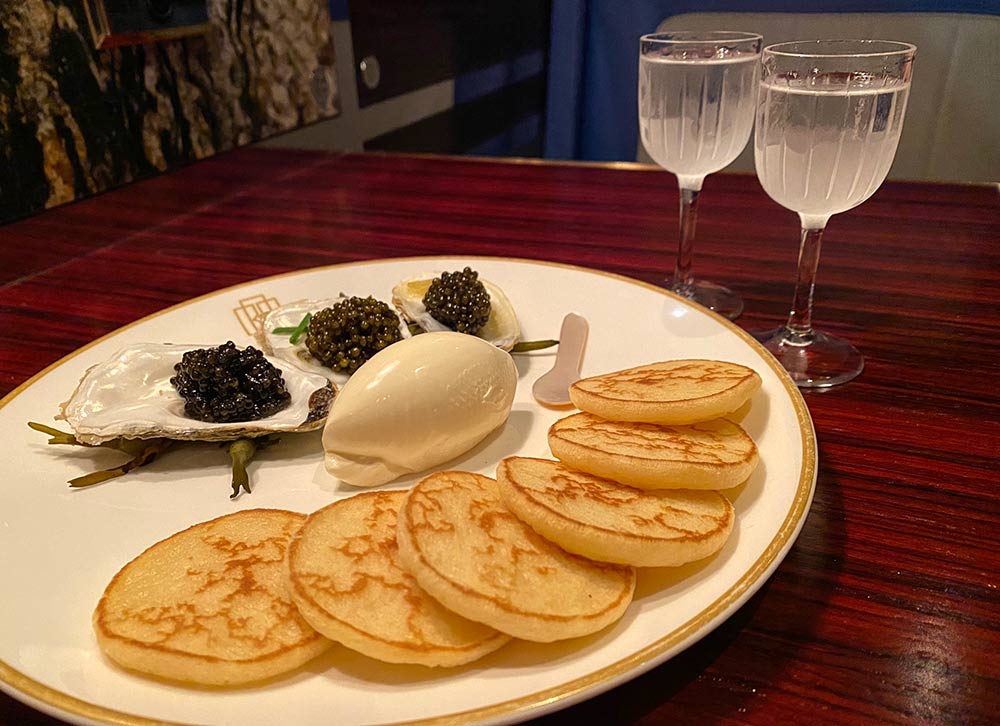 Degustation of three caviars, Siberian, Russian oscietra and Amurski sturgeon (£39) - caviar's always been a big thing at Bob Bob, so aim to order some if you can. Having a vodka shot alongside is practically mandatory. 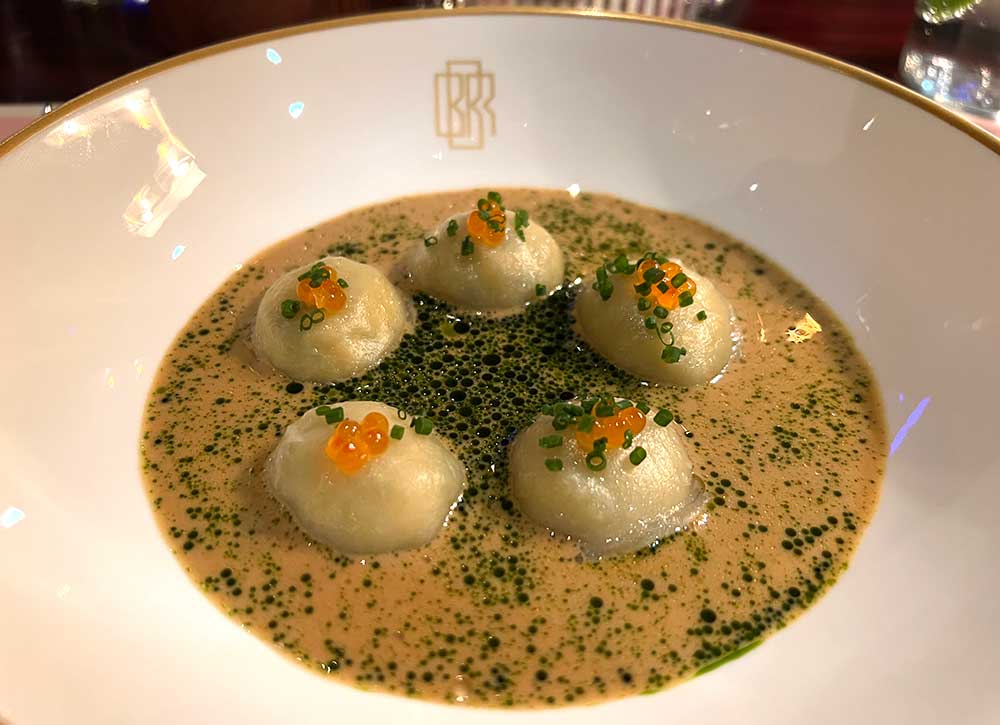 One of the classic dishes, lobster, crab and shrimp pelmeni (Russian dumplings) in a Langoustine bisque (£16). 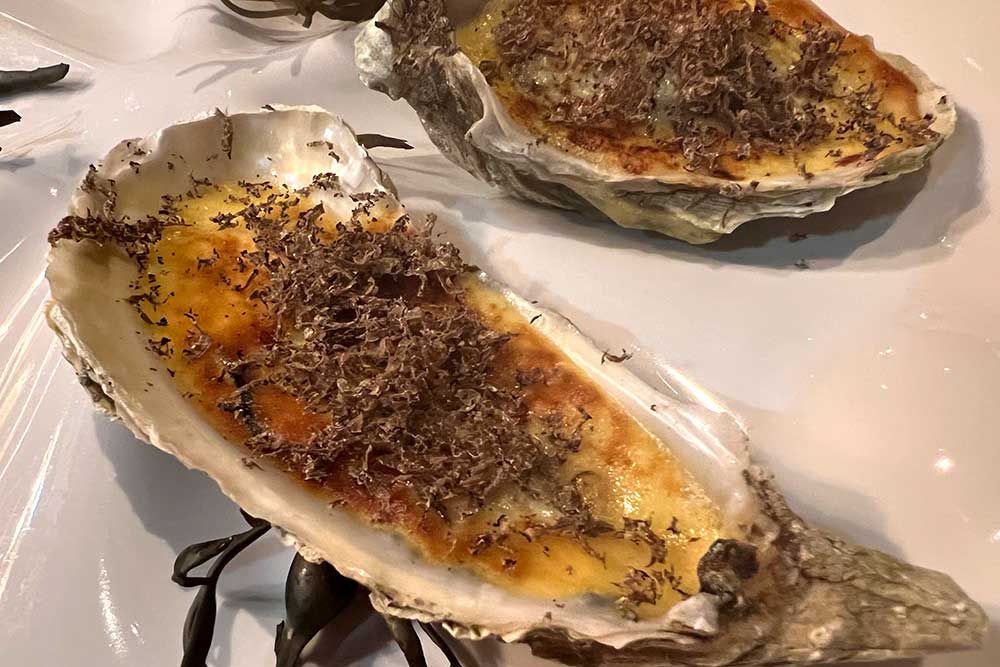 Gratinated oysters 'Orloff, baked with bechamel, parmesan and black truffle (3 for £16, 6 for £32) 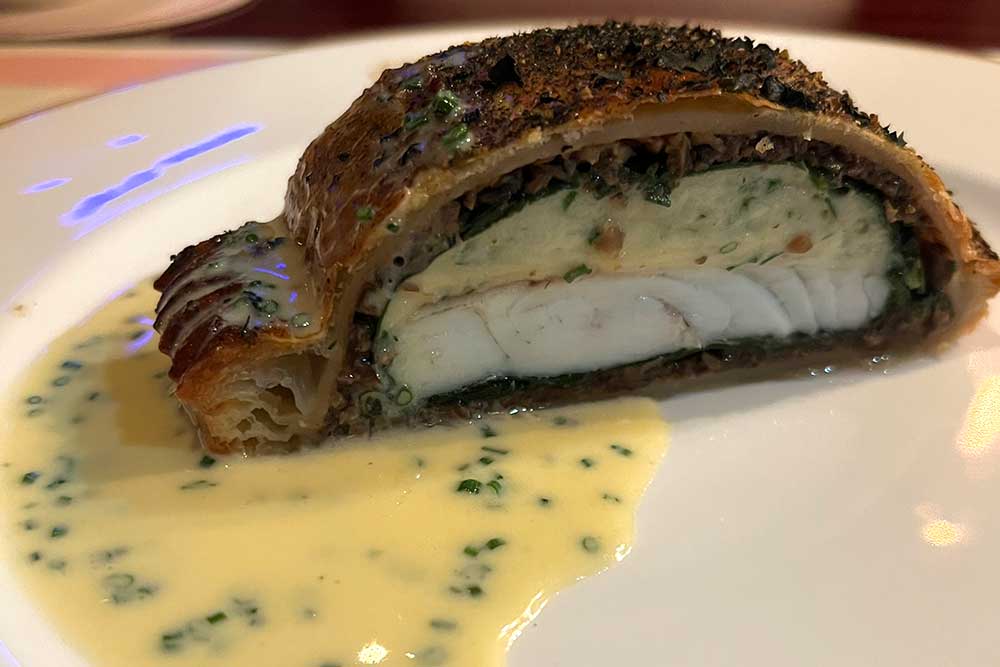 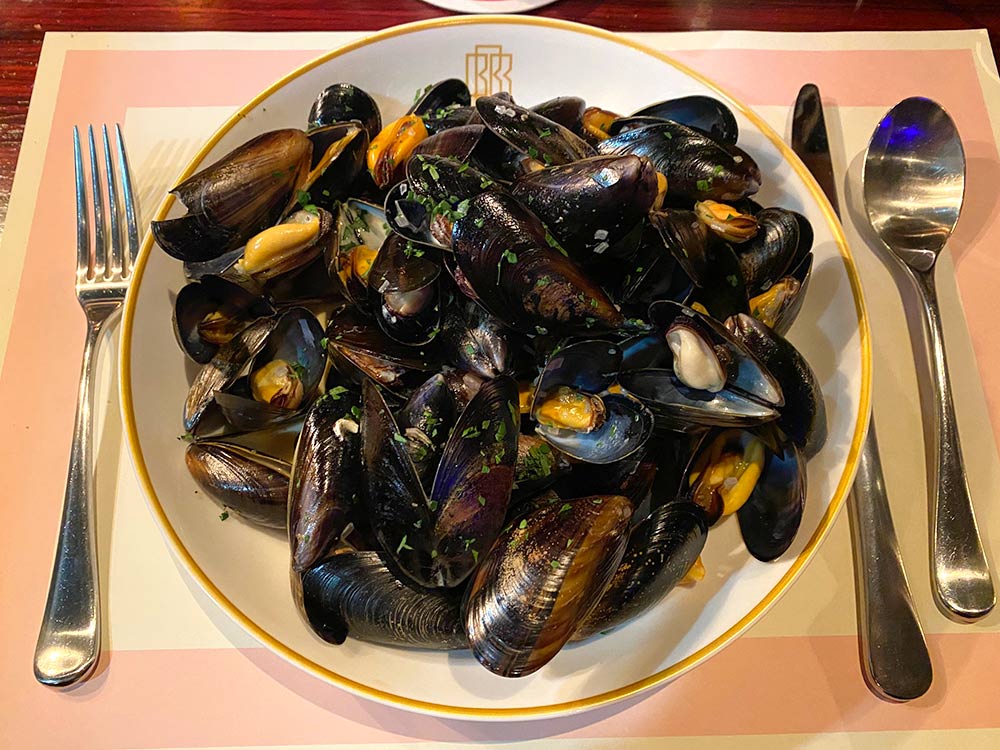 New to the menu, Moules au Champagne cooked with herbs, cream and shallots (£24). You'll need bread to mop up the sauce too. 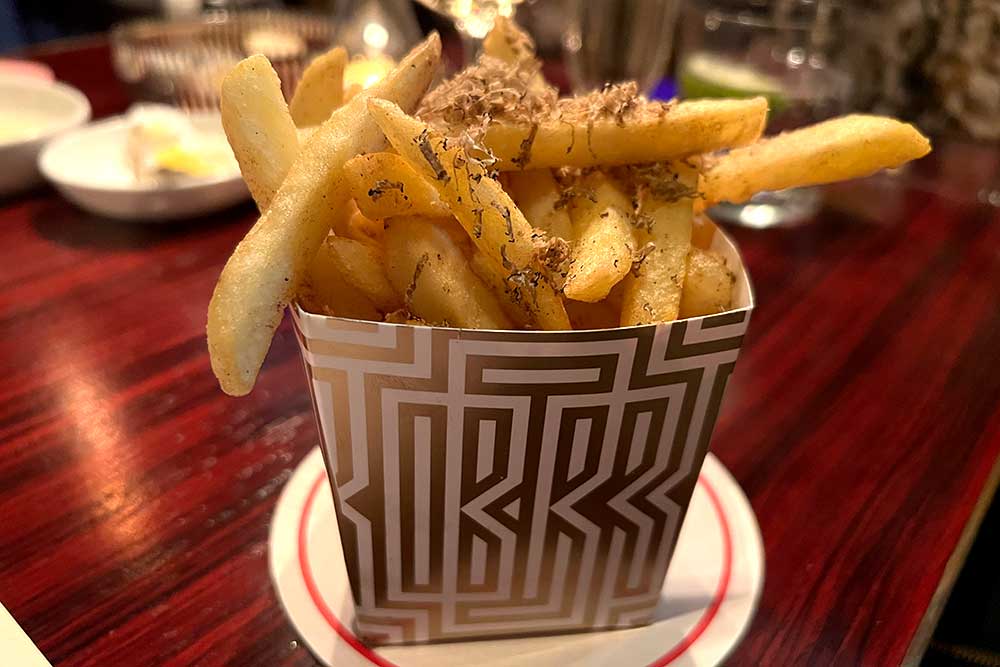 That's barely scraping a menu that's full of things we would return for. We like that there's a "chateaubriand for one" and their Beef Wellington also comes highly recommended, as is their steak tartare. It's a menu that's just packed with comfort food - very easy to get lost in.

If you haven't gone all-out in the previous courses, there's plenty more to take note of here. Highly recommended would be the Armagnac doughnut which you can have with vintage Armagnac from your year of choice (from 1888 to 2005) which makes for a great birthday dessert. We've also had their excellent Ile Flotante before (£10) and the melting Chocolate Glory is a signature BBR dish.

On this occasion we went with one of our favourites, the flaming creme brulee (£9) and it's best to simply show this in action. 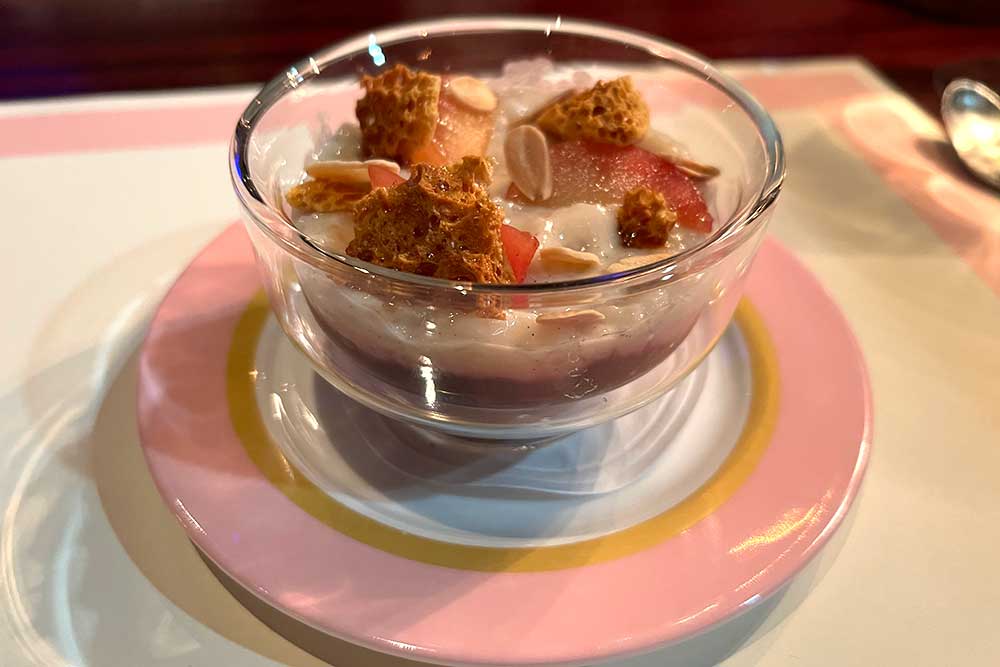 Rice pudding and plum compote - with almond, honeycomb and fresh plums (£8) - if we had a niggle at all about our meal, it would be that we'd hoped when ordering that this was a warm dessert rather than the cold version here.

We've mentioned the maximum £50 mark-up, so if you're looking for a fine wine to go with your meal there are many many options available here. Prices head upwards to a stratospheric £1400+ for a double magnum of Eschezeau Grand Cru - but even on that, there's just the £50 markup. On the lower end of the spectrum, wines start at a very reasonable £28 a bottle for a Stellenbosch Chenin Blanc, a lower entry price than we've seen in lots of London restaurants considerably less fancy than this.

We've been fans of Bob Bob Ricard since the very early days of Hot Dinners and it continues to be one of our favourite restaurants in town. This larger City outpost now more closely evokes its Soho sibling and that's a very good thing indeed. If you're looking for a special dinner (or long lunch) in the City, then this should be high up your list.

Hot Dinners ate as guests of Bob Bob Ricard, prices are correct at the time of writing.