[SIGPLUS_EXCEPTION_SOURCE] Image source is expected to be a full URL or a path relative to the image base folder specified in the back-end but /blog/2014/grangerandco/gallery/ is neither a URL nor a relative path to an existing file or folder.
0
Shares 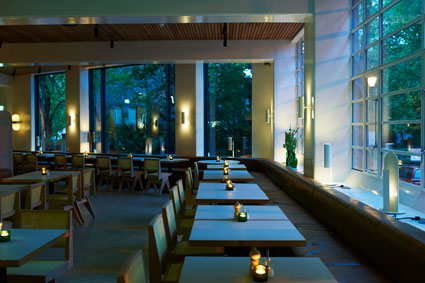 What can you tell me about Granger and Co?

This is the second London restaurant for Australian chef Bill Granger (he also has them in Melbourne, Hawaii and Japan). The first outpost in Notting Hill was fairly famous early on for the queues that built up for weekend brunch.

It’s in the middle of Clerkenwell, only about five minutes walk from Farringdon station.

This is an easy recommendation as one of our favourite bars in London, ZTH at the Zetter Town House is just around the corner. That’s got some of the best cocktails in town in a luxurious setting. But you’d also be well served by a glass of wine in Iberica, particularly if you're getting to the restaurant via Farringdon station.

And who is it suitable for?

Somewhat surprisingly, it wasn’t populated by the after work crowd like the rest of Farringdon. It was pretty quiet up until eight when it started to get really buzzy. So we think it’s popular with the locals and people crossing town for the restaurant. On that note, we were told that even Notting Hill residents will cross town to the Farringdon branch because you can book here.

Otherwise, quite an eclectic crowd, with quite a few spaces where they can push tables together for big groups.

We visited for dinner, when the menu jumps around through a few individual sections. So there’s pizettas, small plates, bowls and grains (past and rice), big plates and BBQ.

We ordered between the small and big plates (the smalls were of a decent size too) and particular favourites were:

We can happily recommend anything we had (courgette chips with nigella seeds and tahini yoghurt also very good - £7.50) and you can see the lot, and the menu we ate from below.

It’s worth noting that the “big plates” are easily big enough that you don’t need to order sides. But if you stick to the small plates, the usual recommendation applies – order in phases which will avoid the “everything turn up at the table at once” mistake.

As well as the main drinks menu, there’s a rotating list of craft beers (we had Kernel and Partizan) . On the main list wines start at £19.50 with 15 bottles under £30 and a fine bottle of bilbao rioja for £34 that accompanied our meal (plus a good 175ml glass of Picpoul on the menu for £5.75).

This is the first of the Granger and Co restaurants that we’ve been to. The large room definitely benefits from a buzzy crowd, so heading there a little later on weekdays (or the very brunch at weekends) is recommended. The food was good, service was friendly, knowledgeable, not overbearing and it’s an easy recommendation if you’re looking for somewhere to eat in this area.

Granger and Co is at 50 Sekforde Street, London, EC1R 0HA (as well as Notting Hill). Find out more about the restaurant on Twitter @Grangerandco

Hot Dinners were invited to eat at Granger & Co - prices were correct at the time of writing.