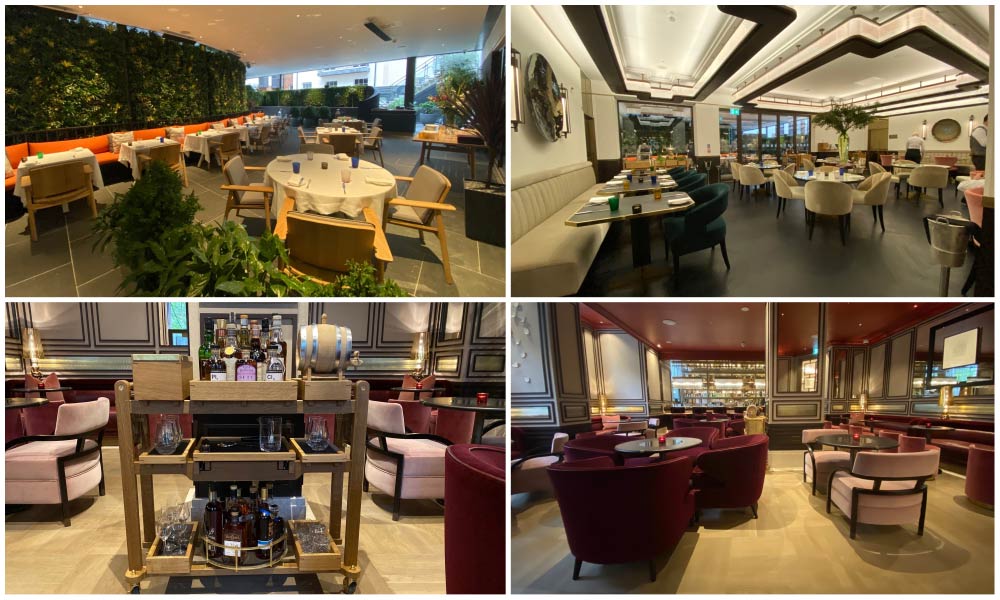 Some of the areas of The Betterment - from top left, clockwise: The terrace, the main dining area, the lower dining area and the whisky trolley in the Pie Bar. Which we wanted to wheel away.

What can you tell us about The Betterment?

Its the latest restaurant from Jason Atherton, best known for the recent Chefs' Brigade show on TV and also the Social group of restaurants like Pollen Street Social. This sees him taking charge of all the food at the new Biltmore hotel in Mayfair (which has opened on the old Millennium Hotel site). That includes the food at The Betterment restaurant, afternoon tea, room service and The Pine Bar.

It's on the south side of Grosvenor Square in Mayfair - and if that sounds familiar, it's because the opposite side of the square is where Maze used to be. That's where Jason Atherton first really made his name working for Gordon Ramsay. It's now Ramsay's Lucky Cat so the two chefs are in something of a face-off across the square.

The most obvious place is in the main bar in the hotel, The Pine Bar. Jason Atherton does know a thing or two about creating a good bar, and he's done a good job here too. There's something of a focus on whisky - and that's really brought home by the whisky trolley that you can call over to your table - picking a glass of something on offer or letting them mix you an Old Fashioned. We have something of a soft spot for trolleys and loved the look of this.

That said, they do a damned good line in cocktails too. Our favourite was The Major Oak, made with Michter’s Rye and Bourbon blend, Porcini, Truffle and Wood - £17 which also came with a selection of truffles, but this was a winner too: 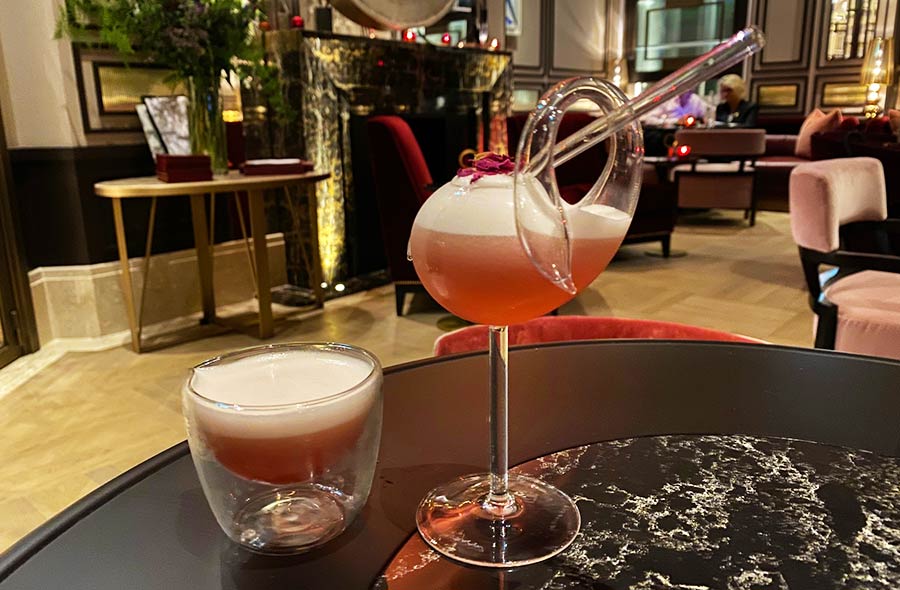 There are snacks in the Pine Bar too, including an "Organically reared foie gras, toasted, brioche (£24) and Native lobster roll, spicy bisque sauce with triple cooked chips, nori (£25)".

If you fancy a drink elsewhere, then it would be remiss of us not to mention the Connaught Bar (now no. 2 Best Bar in the World) which is only just around the corner. They do some of the very best martinis in town.

Onto The Betterment - where should we sit?

Here's where it gets a little complicated. There are really four areas to the Betterment. It has its own bar area and three separate dining sections. The best areas to sit in are the main raised dining room and the terrace that's attached to that. That latter area has its detractors, particularly if you're sat on the sidelines, but we think it's definitely going to be the place to be when the weather's good (although there are heaters).

The restaurant does have something of an identity problem when it comes to those two dining areas and the third section, the part that looks out onto Grosvenor Square (which is where we were sitting). Despite being close to a semi-open kitchen (which has the blinds down so you can't properly see into it), that section feels very clearly second-tier. We think something really needs to be done to try and make it feel as special as the other sections.

What all this boils down to is, if you're going, request a table in the room next to the terrace or on the terrace itself.

And what can we expect from the restaurant itself?

The food at the Betterment does share some similarities with Atherton's other restaurants like City Social (where chef Paul Walsh came from) with a modern European menu, as well as a focus on large sharing plates (something we're seeing a lot of on London menus of late).

Here's what we had on the night: 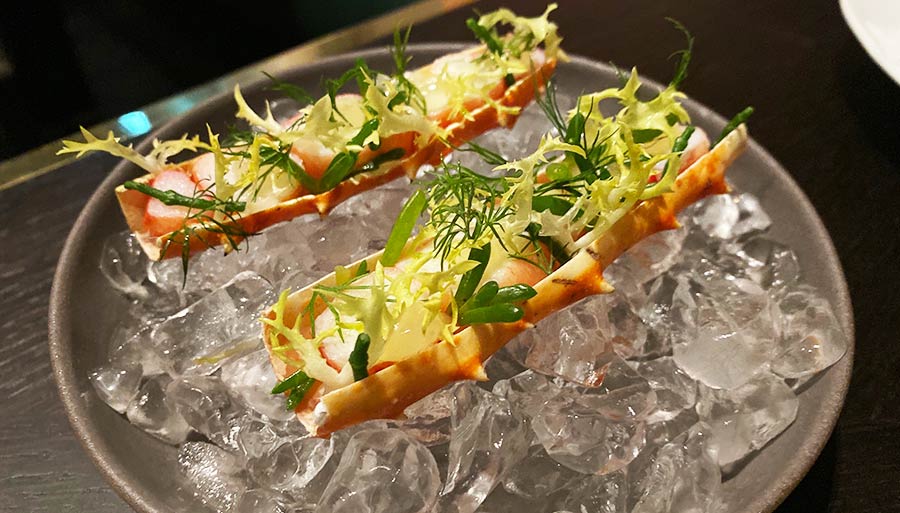 King crab, yuzu & lime 8 (each) - we've seen people divided about this, but we rather liked these kicking off the meal. 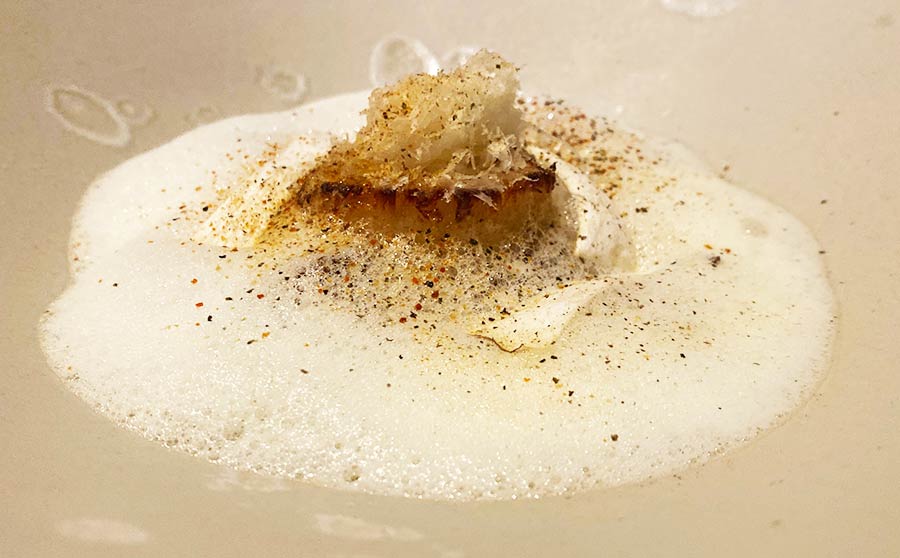 Roasted Orkney scallops, braised girolles, aged parmesan (£15) - about as lovely as you'd expect a cloud of cheese, mushooms and scallops to be. 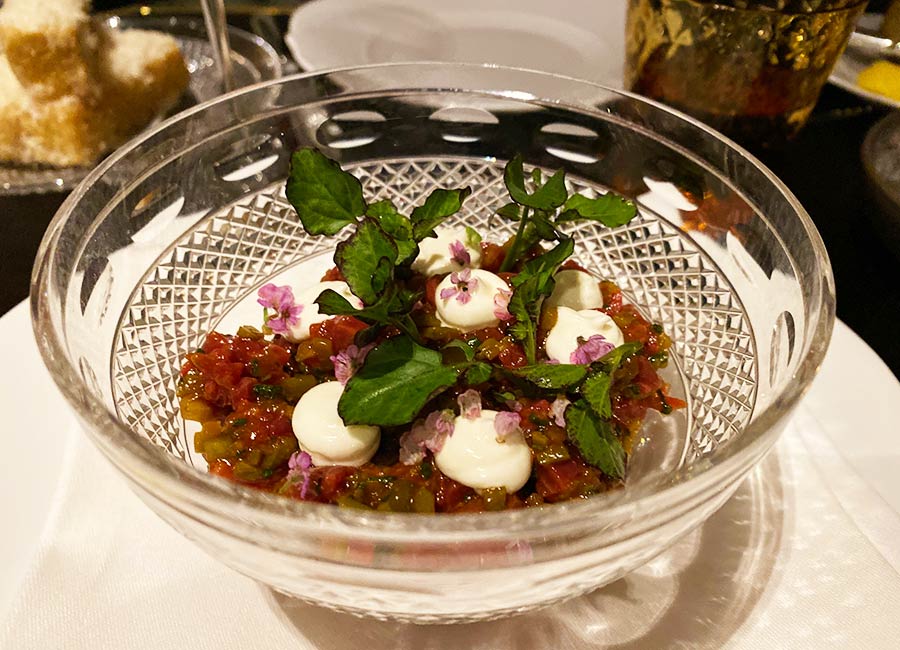 Steak tartare with beef dripping croutons - £16 (you can add Rossini Baerii caviar for £28). You can just about see the enormous jenga-style croutons in the bachground. 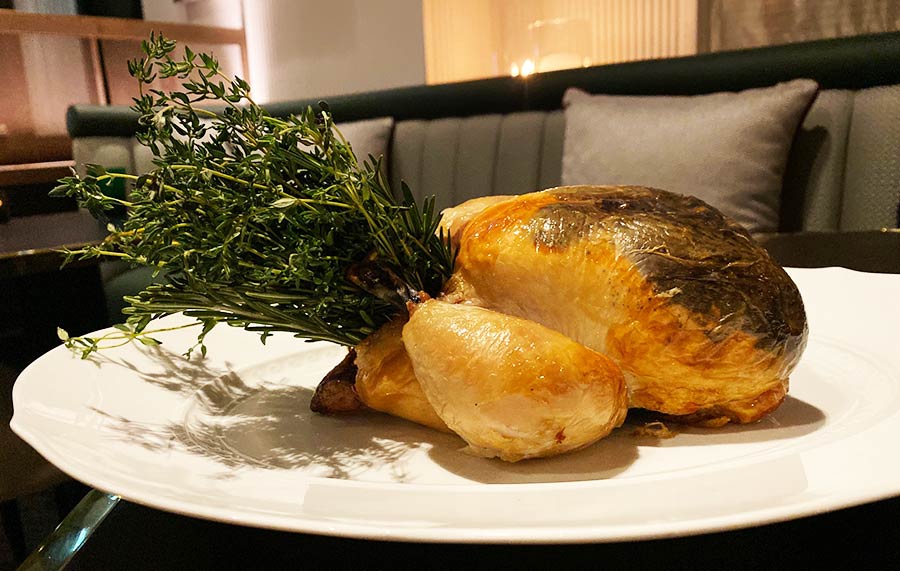 Roast chicken with trompettes and Albufera sauce (£45 to share). The dish is brought to the table like this to show off (and to alert other diners to its presence on the menu) before it's taken away and returned like this... 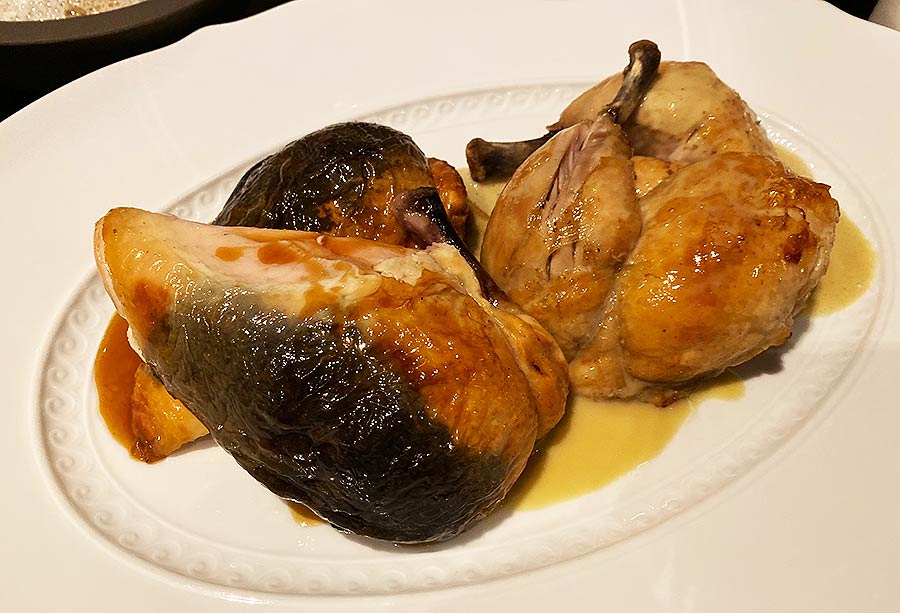 ...which does make it all a bit easier to tackle. That sauce is particularly lovely - but the one downside to the kitchen doing all the portioning for you is that you don't get to keep the chicken oysters! 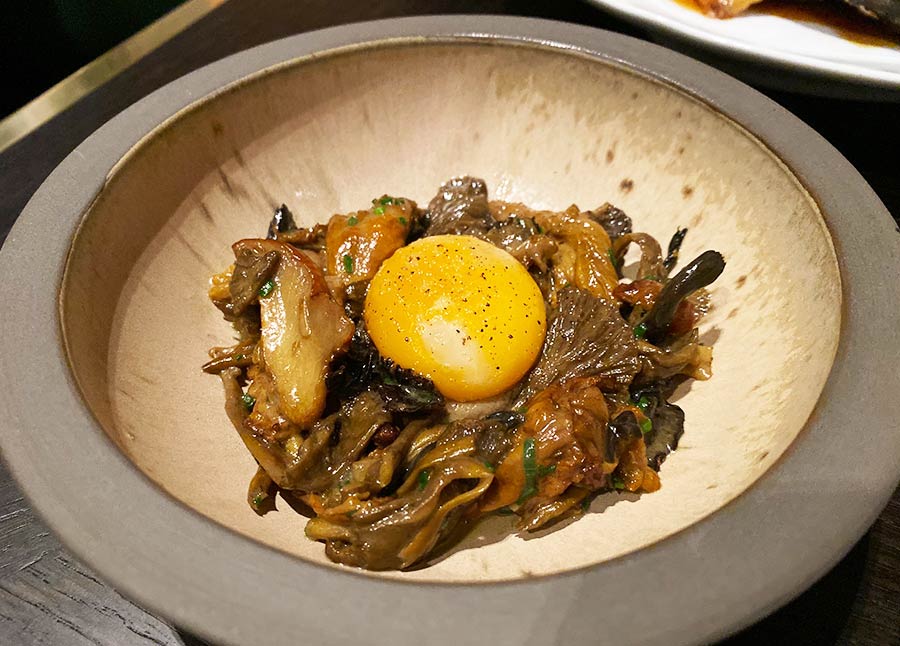 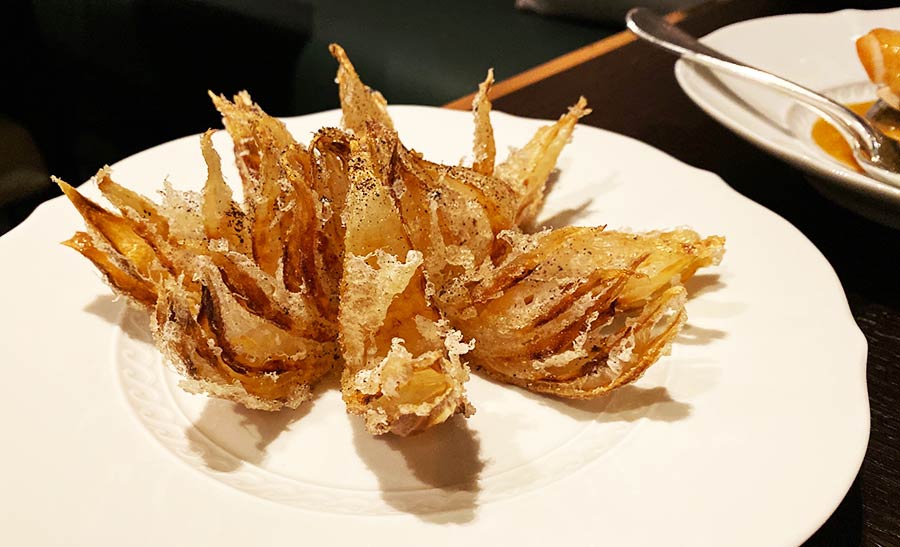 Onion flower, chive emulsion (£8) - this is getting a lot of attention and it's easy to see why. Looks wonderful and that chive emulsion is pretty good too.

Because we went for the signature chicken sharing dish, we've barely scraped the surface of the menu. We've heard promising things about the "Shellfish linguine, sea herbs" (£26) too.

What about vegetarians or vegans?

There is a separate menu which highlights some of the veg dishes on the main menu as well as adding a few like "Cos & nori salad, yuzu, crispy garlic (£12 ) and Home-made linguine Genovese, aged parmesan (£22)

We went for the signature dish which you see below: 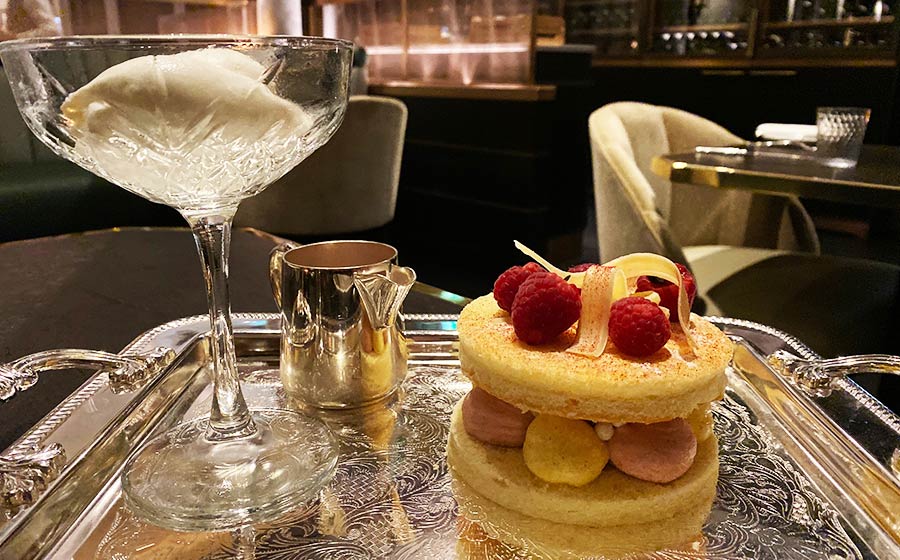 Victoria sponge, strawberry & vanilla cream, yoghurt sorbet (for two) (£18) - definitely the signature dish in terms of look, but the deconstructed nature didn't really do it any favours.

To be honest, we think going for the "Pineapple & coconut mousse, compressed pineapple & lime - £9" would have been a better bet and we've heard very good things about the Basque-style "Baked Ribblesdale goat’s curd cheesecake, autumn fruit, gingerbread" (£10):

It is Mayfair, so expect things to be a little on the pricier side - wine starts at £35 and moves up pretty steeply from there. But if you're looking to splash out a little, there are plenty of opportunities. A 3 litre magnum of "Tenuta San Guido" will set you back £1500, there are a good selection of half bottles if you're taking it slow and a coravin section if you want to try some glasses of the really special stuff. Fancy a glass of "Vega Sicilia, Único Reser va Especial, Ribera del Duero, Spain"? That'll set you back £125 for 125ml.

There's more trolley action here too - both a Champagne trolley and the dessert/port trolley do the rounds.

Some effort is definitely needed to bring more equality to the dining areas, but we think Atherton is very capable of that and where there's a will there's a way. That aside, we found the service at The Betterment faultless and enjoyed the food, although it maybe doesn't quite hit the heights of some of Atherton's other restaurants. It's early days, however, and we can only see this getting better and the bar is sending out some cracking drinks.

Hot Dinners ate as guests of The Betterment. Prices are correct at the time of writing.

More about The Betterment