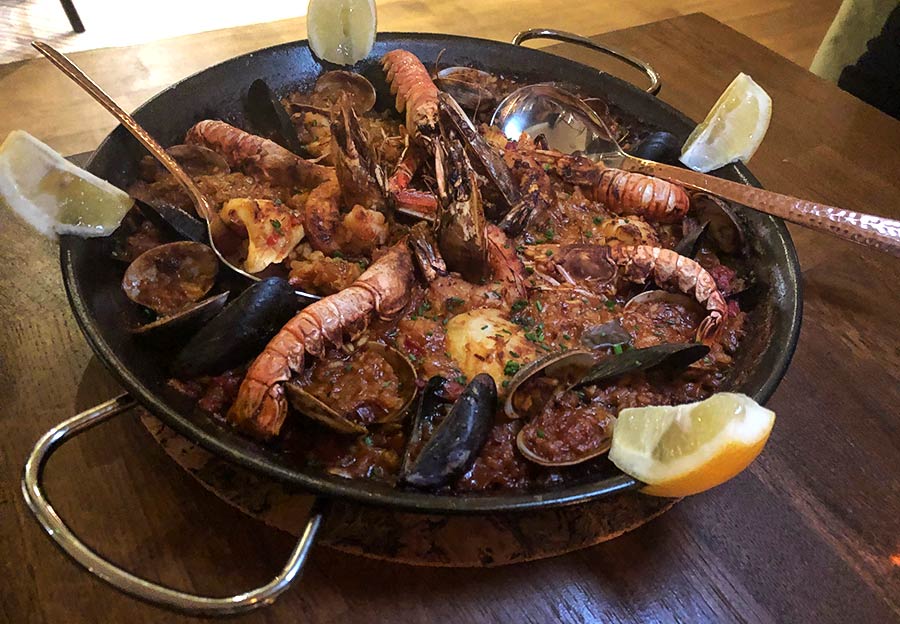 One of the main events - the Paella Marinera (£34) with mussels, clams, giant prawns, saffron rice. This serves 2-4 people - but if there are four of you, we'd say you should take that opportunity to order a second meaty paella too. Because we're terribly greedy.

What can you tell us about Barullo?

This is the new restaurant from Victor Garvey, the person also responsible for the popular Rambla in Soho. Like that restaurant, Barullo does a mean line in tapas, but here there's also a big added extra - paella.

It's in the City which also means that, at the time of writing, it's a weekdays only restaurant (that may well change at a later date). The restaurant is on Bevis Marks (taking over the space that was once James Cochran EC3) and it's just a short walk to Aldgate station.

Where's good to meet for a drink first?

In fairness, there's not a great deal of choice in the immediate vicinity. If you're after a bar with a bit of a view, there's Jin Bo Law on the top of the Dorsett or the Alchemist bar that's just up the road.

But probably the best spot is downstairs from Barullo itself - BYOC. That stands for Bring Your Own Cocktail - where you bring a bottle of spirits and let the bartenders do their thing. It's usually a two hour session - so probably a bit much before dinner at Barullo - but you could go after and make a night of it. 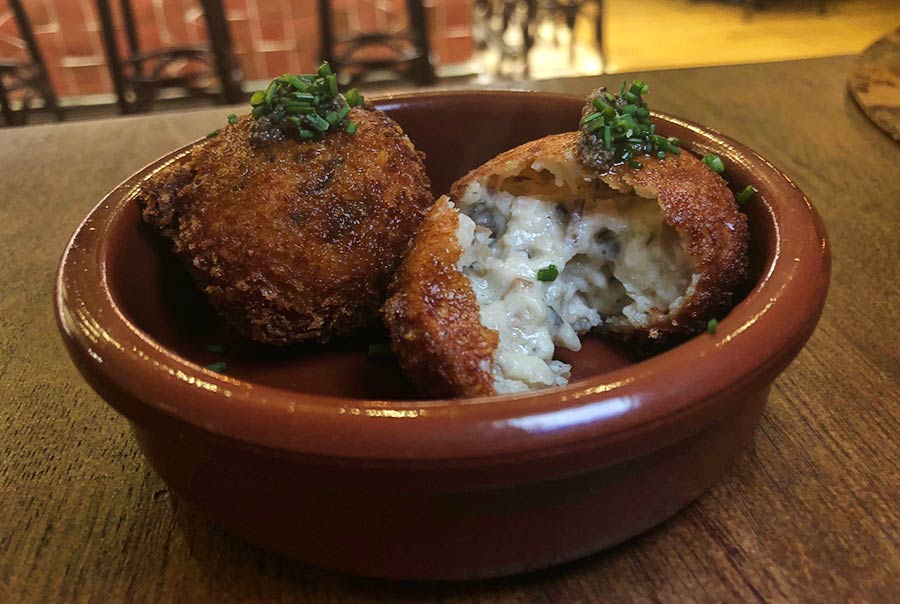 Just order the croquetas as soon as you sit down - you'll definitely want them. These are wild mushroom ones with truffle (£5).

So where should we sit?

If you're a fan of counter dining - or just want to pop in for a quick solo lunch, there are plenty of counter spots. Alternatively, one of the booths at the back is your best choice.

The menu is a combination of veg, seafood and meat tapas, cheese and charcuterie and the aforementioned paella. You could easily prop up the bar with a bottle of wine and snack on tapas into the night (which sounds like a perfect night to us) but if you're out for a meal, then you definitely need to order the paella. If you're doing that, then order about four more tapas dishes in advance of the main dish.

You can see the paella we had above - and in addition to that, there's a meat version (with confit pork and confit duck - £30) a veg version (with seasonal veg - £22) and a Paella Negro (squid ink, calamari, artichokes, peas - £30). So if there are more than two of you, you can think about ordering a couple and mix and match.

Here's what else we had on the night. 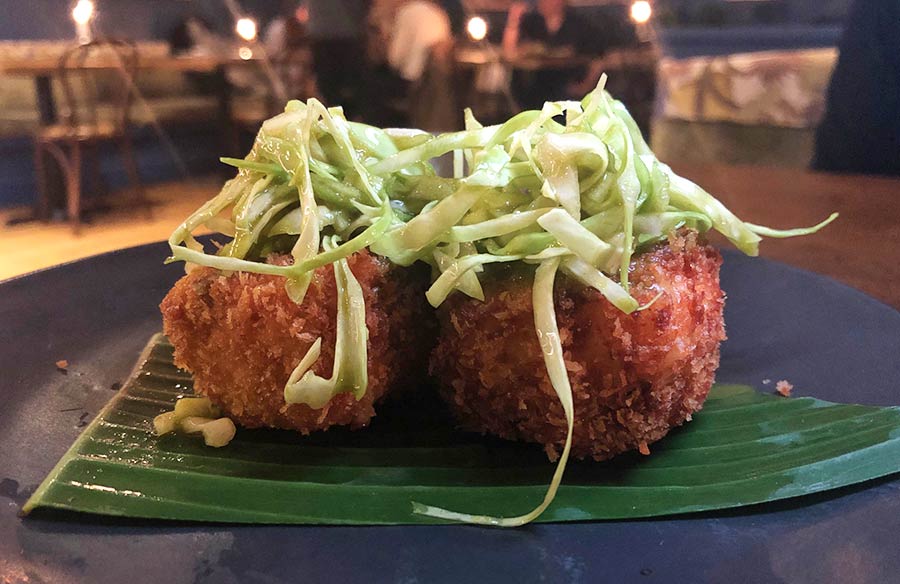 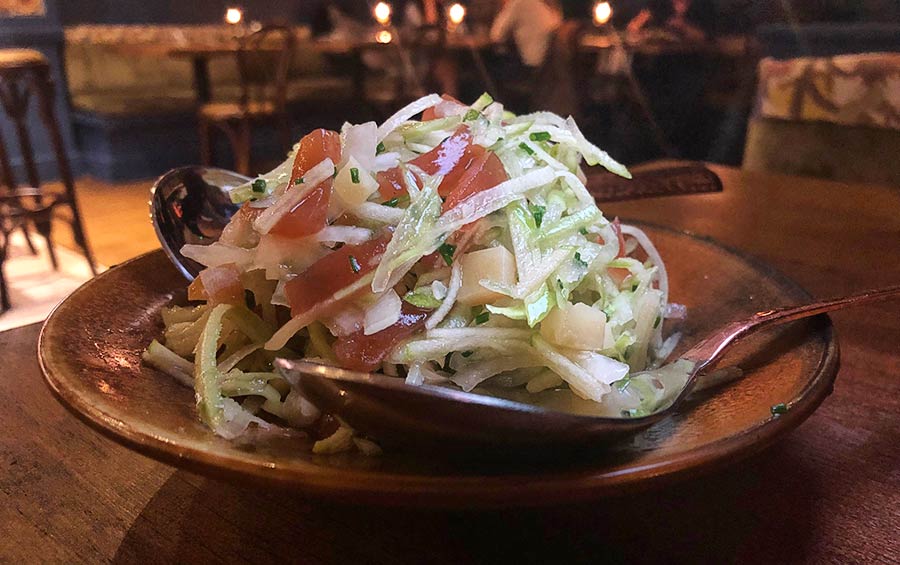 The green apple and kohlrabi salad - with green plum jelly, Garrotxa and sherry vinaigrette (£6) - we're not often drawn to a salad for starters, but this was just wonderful and considerably elevated by the plum jelly and Garrotxa cheese. 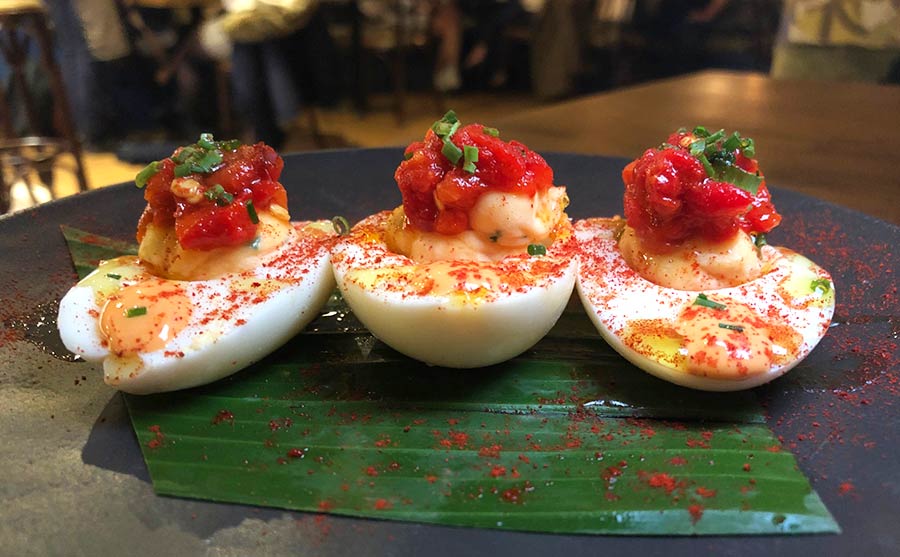 As readers of Hot Dinners may be aware, we find it very hard to resist devilled eggs when we see them on a menu. These excellent examples come with piquillo (£4). 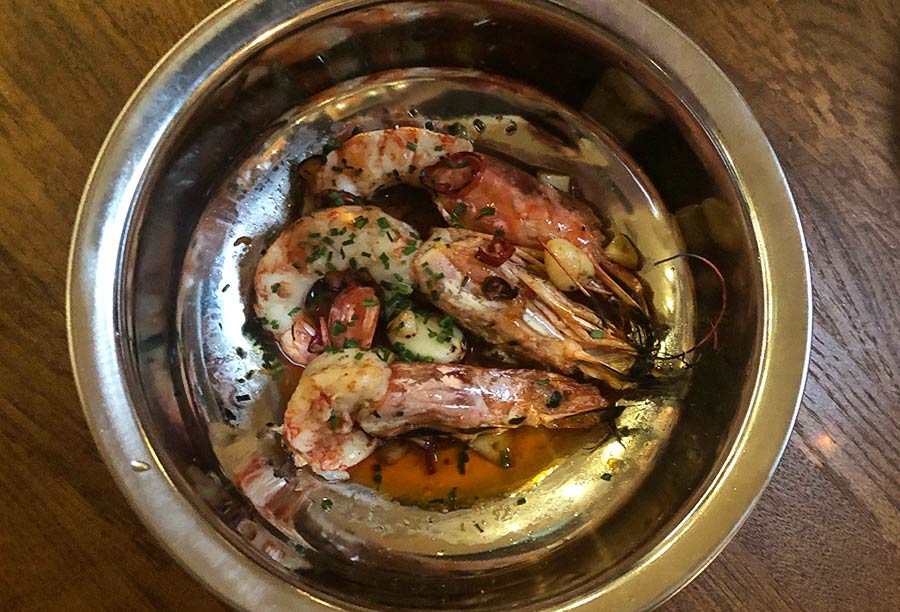 If the theatre of the paella isn't enough for you - how about some prawns flambeed in tequila at your table? The Prawns "pil-pil" also come with Guindilla chilli and you'll be dipping them in the tequila to soak up just as much of it as you can. 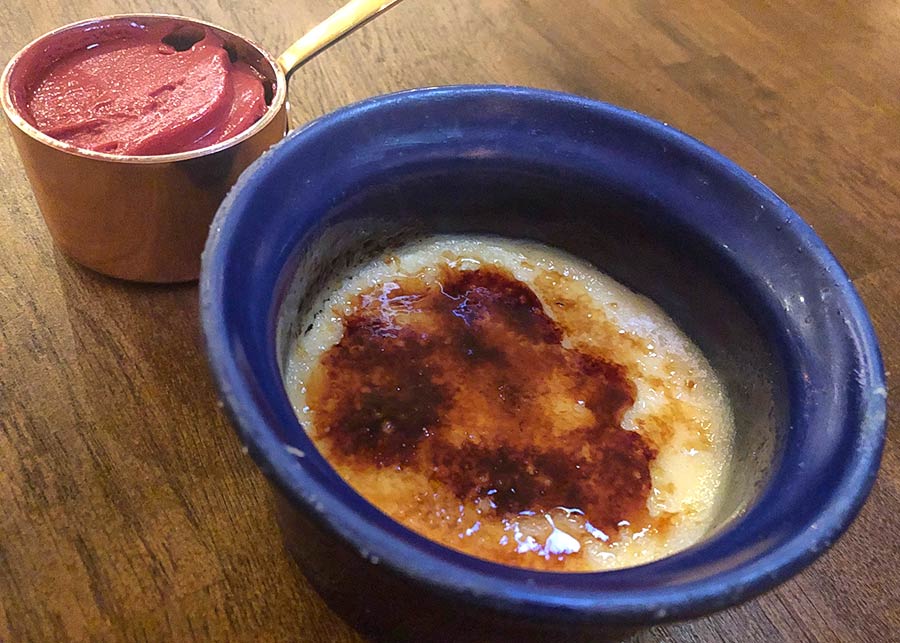 There are only two desserts on the menu - the coconut ice cream or this - crema Catalana with raspberry sorbet and sherry lees (£6).

If you're not going vegan, there's plenty in both the veg tapas section and there are the cheeses too - not to mention the vegetarian paella.

For booze, it's Spanish wine, cava, sherry or vermouth. And it's a pretty well-priced list too - with the house wine coming in at £25 a bottle (Finca Valero white/red). We think they could probably add a few more bottles at the higher end of the list (it is the City, after all) and there's no better way to finish a Spanish meal than with a glass of Pedro Ximenez in our opinion (£8 a glass).

if you loved Rambla, you'll absolutely love Barullo too. Sure, it's not in the middle of bustling Soho, but eating at this City spot is as close as you'll get to dinner in Spain without having to go to the faff of booking an Easyjet ticket. Drop in for lunch or - better still - make the time for a long, boozy dinner.

Hot Dinners ate as guests of Barullo. Prices are correct at the time of writing.