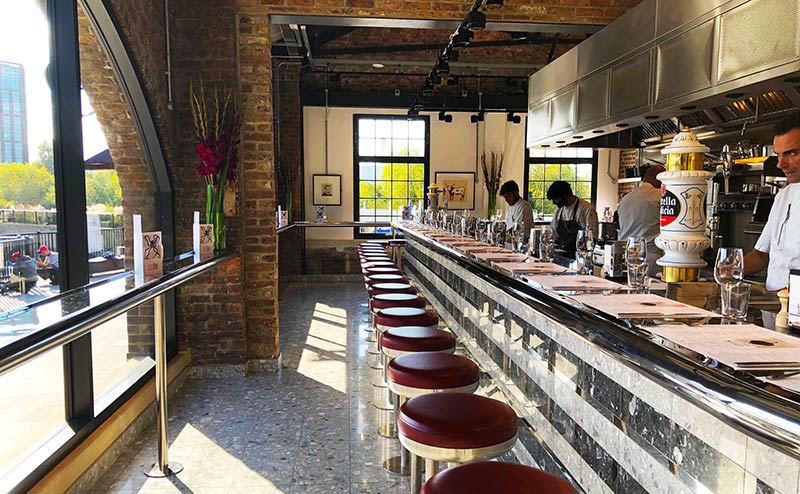 The counter at Barrafina - which continues around the corner on both sides. So it's big. And as you can see, plenty of space to have a drink while you're waiting for a space to be free.

What can you tell us about Barrafina?

It's the flagship brand of the Harts Group - who are also behind El Pastor and Quo Vadis. One of the first proper tapas restaurants in London, Barrafina has been hugely popular since it opened, and the was quite ahead of its time with a very strict no-booking policy. It was also the restaurant where Nieves Barragan became a big-name chef, responsible for many of the restaurants' successes before she moved onto Sabor.

Where can we find the restaurant?

It's all part of the huge new Coal Drops Yard development in King's Cross. You can read all about that here, but essentially it's adjacent to Granary Square behind the station. Barrafina has a pretty prime location on the first floor of the development. Head up the first set of stairs on your left (if you're coming from Granary Square) and you'll find it.

And what's the set-up?

As usual, it's all about counter dining at Barrafina. Each of their restaurants is a perfect example of what's so good about counter dining in London as you can easily ask about items on the menu that you don't understand (a lot of it is in Spanish) as well as get food envy from what everyone around you is eating. Which you can immediately rectify by ordering something you've seen a neighbour eat.

But there are tables in this Barrafina?

There are a couple of tables - which is a departure for the restaurant. As you enter, you'll see two tables of four on the right and these are the disabled-access tables. As they've created the restaurant from scratch, this is the first time a Barrafina has been able to offer these. They will be made available if not required, but there's a risk of being moved if they are.

Absolutely - Barrafina continues to be a no booking affair (unless you hire out the private room at Drury Lane or Adelaide Street). But there's an extra standing bar space all around the outskirts of the room where you can order drinks and snacks while you're waiting for space at the counter. So it's a very convivial place to wait.

So the food - is there much new on the menu?

As with every new Barrafina, there are LOTS of new dishes on the menu. While there are certain themes repeated across the branches - snacks, cold meats, tortillas, seafood, etc - all the Barrafinas have many dishes that are exclusive to the branches (as well as plenty of regularly changing specials).

The menu at the Coal Drops Yard Barrafina is Catalan-influenced, so you'll see more dishes from that region courtesy of Executive Head Chef, Angel Zapata Martin - particularly from his own hometown of Catalunya.

Here's what we had on our lunchtime visit. As it's a small plates restaurant - we'd advise ordering 2-3 dishes at a time max. It's very easy to order more at Barrafina, so don't overdo it all in one go. 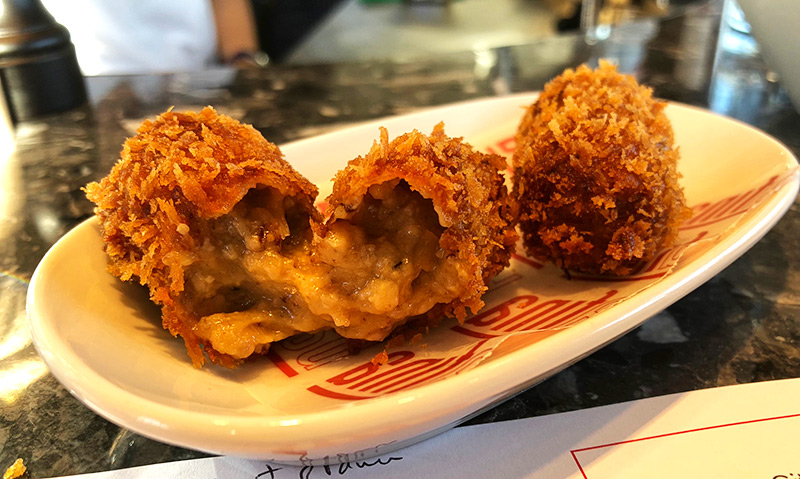 On the specials menu - suckling pig croquetas (£7). Barrafina do some of the very best croquetas in town and these are no exception. 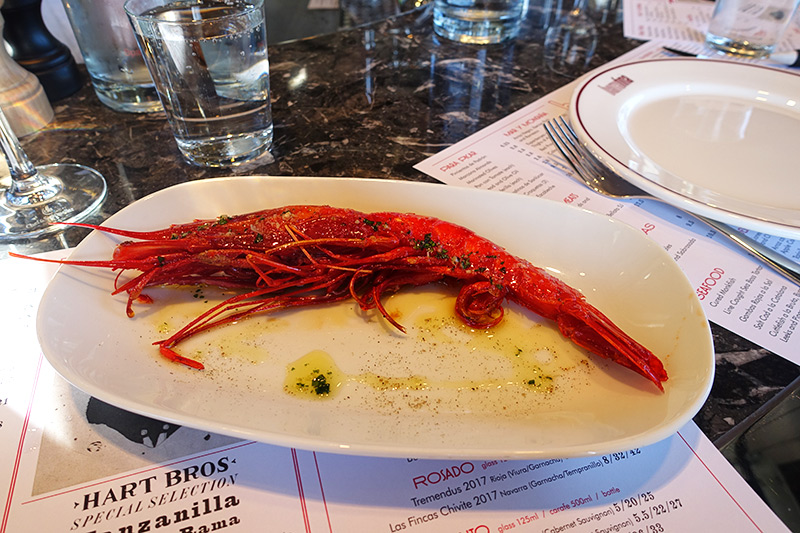 Also on the specials menu - this HUGE carabineros. Such a thing doesn't come cheap at £22  though. 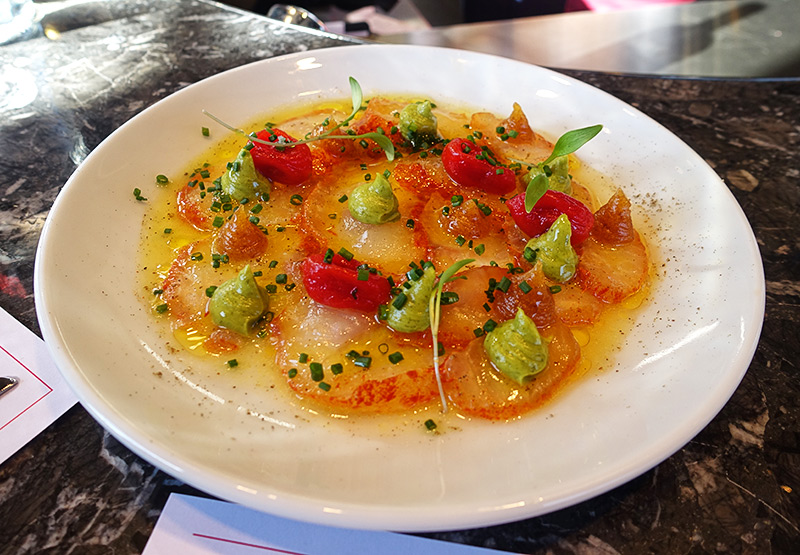 Quite probably one of our favourite dishes on the menu - the cured monkfish (£18.80). It's cured in fino, salt, sugar and paprika and topped with date puree, avocado mousse and confit cherry tomatoes. It's really quite incredible - with every flavour combining in an astonishingly good dish. 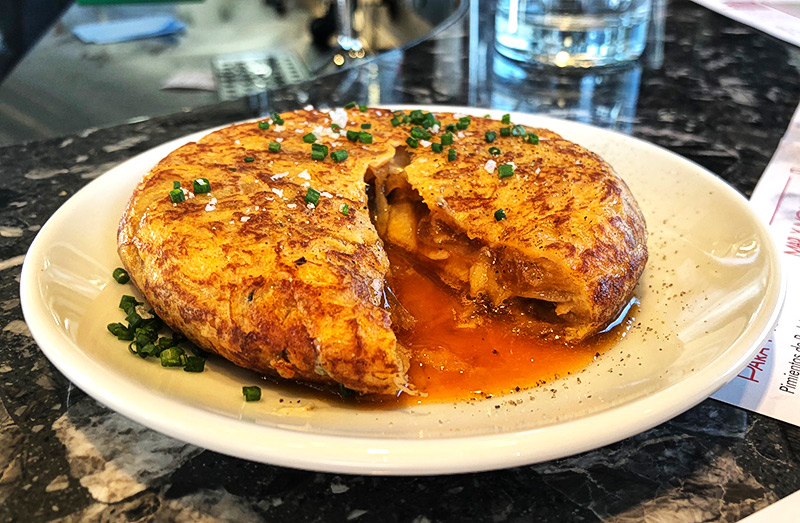 Much like the croquetas, Barrafina REALLY know how to make a tortilla. This new version is jamon and cabrales (ham and blue cheese) at £9.50. The blue cheese works wonders and the tortilla is as gooey as you'd want it to be. 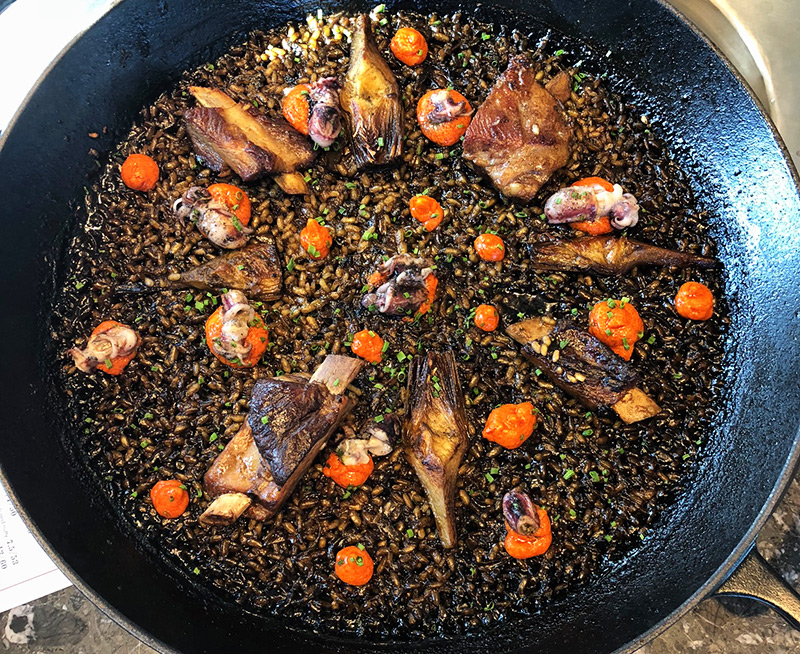 Another new signature dish - the arroz negro (via squid ink), Iberian pork ribs, artichokes, romesco and sepietonas - aka baby cuttlefish (£21). We're probably not doing justice to the huge pot this dish comes in. There's a very thin layer of the rice which you attack with spoons to mix the whole thing up. A perfect sharing dish with a deep rich flavour. 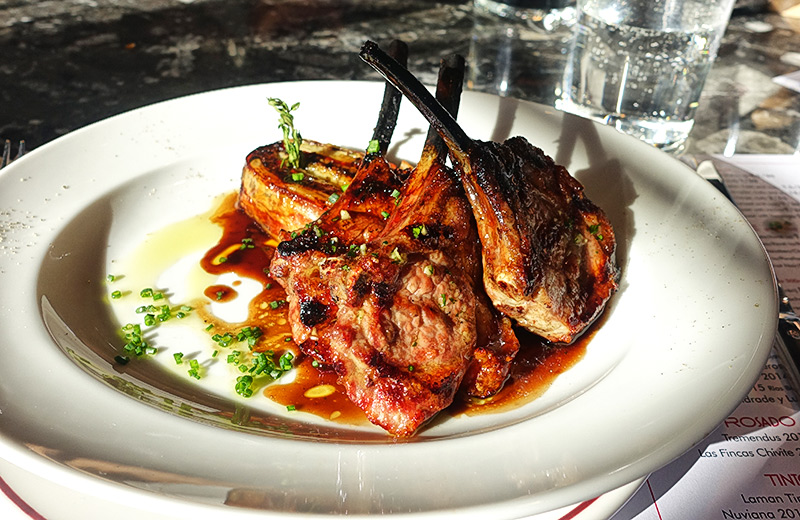 This new addition to the menu is also one of the signatures - the Pyrenean lamb chops with tumbet (potatoes and aubergine wrapped in pancetta) - £21. They're made from Agnei Iberico, a slightly older lamb which leads to a much more intense flavour than the usual milk-fed variety you may have had at previous Barrafinas.

And, of course, leave some space for dessert?

Absolutely. We've been hearing good things about the rosquillas (£4 for 2) which are mini Spanish doughnuts. Particularly good if you've overdone it with the rest of the menu. But here's what we went for... 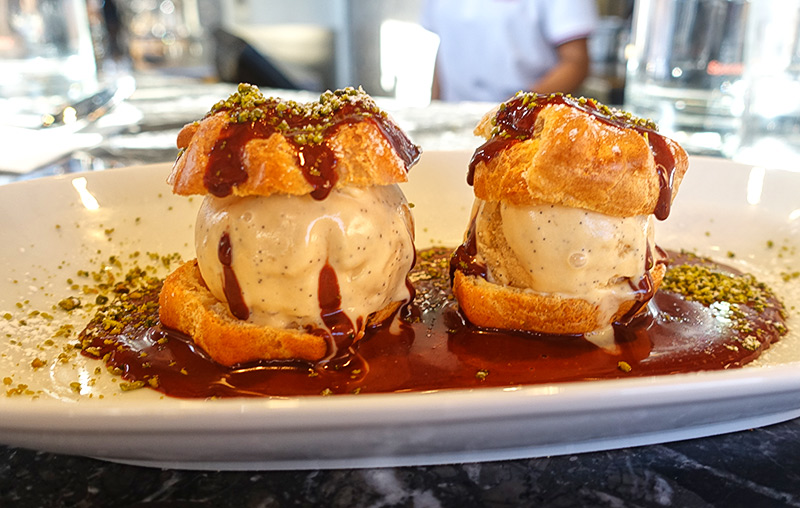 Another new signature dish at the new location - these are lionesas, described as the Catalan version of profiteroles with vanilla ice cream and chocolate sauce (£9,80). Unmissable.

We were visiting at lunch, so it was a dry affair for us this time around (which is where the sparkling water on tap comes in handy). But as you can expect, there is plenty of sherry and cava on the menu. Cava starts at £37 a bottle, white/red wine at £25 a bottle. with plenty available by glass and carafe. It's on the pricier end, but we find that you can't really go wrong with the Harts Group's own Albarino.

Given the success of the other Barrafina openings, it was always something of a sure thing that this latest outpost would be an instant hit too. It has everything you want from a Barrafina - excellent counter dining, lots of excellent new dishes to try and one of the buzziest restaurant experiences in London. All five minutes walk from King's Cross station. Definitely recommended.

Hot Dinners were invited to Barrafina. Prices are correct at the time of writing.

How to book:  No reservations, walk-ins only.