[SIGPLUS_EXCEPTION_SOURCE] Image source is expected to be a full URL or a path relative to the image base folder specified in the back-end but /blog/2013/socialeating/gallery is neither a URL nor a relative path to an existing file or folder.
0
Shares 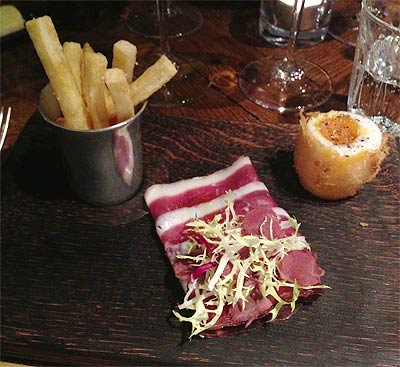 What can you tell us about Social Eating House?

This is the third London restaurant from one of London's top chefs Jason Atherton, whose first big solo hit was the (still) very successful Pollen Street Social. This latest restaurant comes just over a month after he opened Little Social, and he has more to come later this year. Social Eating House sees Atherton giving Paul Hood, the former Pollen Street Social head chef, the reins. And, as befits Atherton's first foray into Soho, sees him aiming for a more casual vibe than the original Pollen Street.

As with any Soho restaurant, there are plenty of drinking holes to choose from, with the most obvious nearby choice being members' bar (but open to non-members with a reservation) Milk and Honey, just a few steps away.

But we really think the perfect pre-dinner drink could be had in the upstairs bar at Social Eating House itself. It's a lovely space overlooking Poland Street, with a cocktail list that we'd happily work our way through  - and all are happily much less than you might expect. All the drinks on offer are inventive concoctions, at relatively decent prices (at £8-£9 they are MUCH cheaper than Pollen Street's). Our choices were the Cereal Killer (rum, white chocolate, galliano, coco pops milk, xocolat bitters and served in a see through "milk carton") and the Kindergarten Cup (Skittles washed vodka, aperol, lemon, egg white, wham bar syrup, vanilla bitters - with a nursery-style alphabet on the top). Both were strong although a little on the short side.

The bar has a number of snacks if you're not heading down for dinner, with a pork belly slider (£5) and duck fat chips (£4) among others. They also serve the "jars" up here - but more of that in a minute.

There's a small bar area on the ground floor if you fancy counter dining and, much like Little Social before it, the best seats have to be the banquette seats opposite the bar by the window. That said, we were slap bang in the middle of the room and all the tables were fine. The attention to detail here extends to the lighting. Clever use of spotlights means the room in general has a dark Soho feel to it, but each table has plenty of light to see what you're actually eating.

It is indeed, some particularly fine freshly baked bread with salted butter is quickly brought as you sit down.

The menu is split into four sections - jars, starters, mains and desserts - as well as a separate specials menu.

We think the jars are worth ordering to keep you going as you start working your way through the menu. At £4.40 to share these are either pork rillettes, mackerel tartare, spiced aubergine or the one we opted for - a nice and salty salt cod brandade with potato chips (those'll be "crisps") celery salt, vinegar and parsley oil. These come with garlic rubbed toast too and, while small, are a perfect sharing dish. They'd certainly be ideal for the bar upstairs.

For starters, we had two dishes which set the tone for the restaurant. The "CLT" was essentially a deconstructed crab, lettuce and tomato dish with every tomato on the plate prepared in a different fashion - from sun-dried to confit. The duck “smoked ham, egg and chips” featured a breaded duck egg with duck fat chip "soldiers" and duck ham smoked on the premises (you can see the smoker outside the open kitchen downstairs if you 're popping down to the - immaculate - loos). Both showcased a kitchen turning out food that was both playful and delicious.

The mains may not have been as inventive as the starters, but our cote de porc and lamb neck fillet were still both excellent dishes. It's also worth noting that the mains had a particular focus on fish, with plaice, cod, hake and halibut on the menu when we visited. We'd maybe recommend trying one of them to vary things a little - or alternatively head for the specials. Much like Little Social, the specials menu concentrates on steaks of the day, alongside special cocktails and a range of sundaes.

We had a pina colada sundae - with coconut sorbet, pineapple ice cream, pineapple falermum (that's a sweet Caribbean syrup - and yes, we did have to look it up) and citrus meringue. That and the other dessert -  a milk chocolate mousse with praline paired with a chocolate éclair filled with salted caramel ice cream - were both excellent and saw a return of the inventiveness we saw in the starters.

It's also worth noting that in an effort to show the provenance of the food, there's a separate page that shows how far everything came to get to the plate - from 70 miles (lamb neck from Romney Marsh) to 595 miles (cockles from Isle of Barra, Scotland). So you can be as green as you like when you order.

In all, it was an excellent meal and with a changing menu that would benefit from repeated visits. The bar upstairs is an absolute must if you're passing - we'll definitely be back for cocktails and snacks. We're impressed with the way that Jason Atherton has created now three separate restaurants that aim for distinctly different markets. Given his success so far, we await eagerly to see what's up next...

Prices were correct at time of writing. Hot Dinners were invited to eat at Social Eating House.