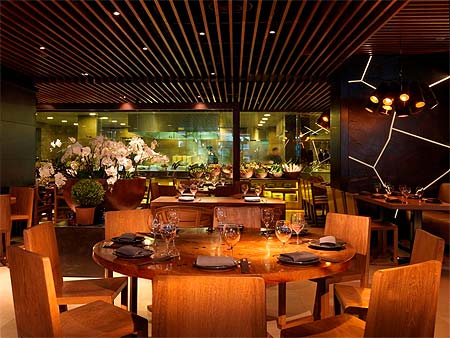 What's Novikov all about?

It's the first restaurant outside Russia for Moscow's biggest restaurateur Arkady Novikov.

On Berkeley Street - opposite Nobu Berkeley, it takes over much of the corner spanning three floors. The ground floor is the Asian restaurant on the corner of Berkeley and Mayfair Place, then there's an Italian restaurant down and towards the back and a massive lounge bar downstairs.

Well, it's in Mayfair, it's owned by a Russian and it's had untold millions lavished on its interior - it wouldn't take Sherlock Homes to work out it's aimed at the moneyed market. But when we looked around the dining room on a Friday night there were all sorts here - older couples, groups of hedge-funders wining and dining clients, couples on dates - even a family or two.

Where should I meet for pre-dinner drinks?

You'll probably want a look at the downstairs bar - it's big and brash and the cocktails we tried weren't bad. It was pretty busy but easy to get a seat when we popped in at 7pm but by the time we left it had a rope and clipboard wielding doorman in place, keeping the hoi polloi away. Other places nearby are Alloro on Dover St which has a decent list of reasonably-priced wines by the glass.

It's a well designed dining room, so it depends on what you're looking for. There's a few large tables suitable for groups, some nice tables for two along the glass wall at the back where you can see the chefs hard at work in the open kitchen or you could manouvre yourself into a seat where you have a good view of everyone coming in - this is people-watching paradise.

The menu's on the large side, so while you're working your way through it wondering what to choose you could have some dim sum to start - we picked a selection of steamed king crab and parma ham dumplings and pan fried foie gras and beef dumplings, both were great although the former was our favourite. We followed that with wafer thin salmon sashimi 'new style' which meant it came with a yuzu soy dressing which cured the edges of the fish ceviche-style and some California rolls which were as pretty as a picture. Our mains were yuzu scented miso black cod and a frankly spectacular roast duck with Asian mushrooms and fresh truffle jus which, if we weren't better brought up, we would have slurped with the serving spoon it came with, it was so good. We felt as thought we ought to try the desserts in order to be thorough but were surprised by how much we liked the steamed coconut custard and a green tea brulee.

You could probably sort out the finances of several European countries with what could be spent on the higher end of the wine lists here - to be honest we didn't look much beyond the very low limits. The sommelier,  Alessandro, who'd previously been at Maze and L'Anima, picked out a 2010 Ribolla Gialla “Roncalto”, Livon at £45 which went well with the range of dishes we tried.

There's no getting away from it, Novikov is not going to be a cheap evening out. But to be fair, seafood this fresh and this good doesn't usually come cheap anywhere, let alone in Mayfair. We were a little greedy and our bill came to just shy of £250 for two, but you could probably bring it in under £200 fairly easily.

It's loud, busy and brash - but to be honest, we had a blast at Novikov. Our waiting staff were utterly lovely and the room itself is buzzy and relaxed - although they could certainly do with working on the confusing entrance greeting area. The food in the Asian restaurant isn't ground-breaking, but it is very good indeed.

Hot Dinners was invited to eat at Novikov. Prices are correct at time of writing.