[SIGPLUS_EXCEPTION_SOURCE] Image source is expected to be a full URL or a path relative to the image base folder specified in the back-end but /blog/2013/apeandbird/gallery is neither a URL nor a relative path to an existing file or folder.
0
Shares 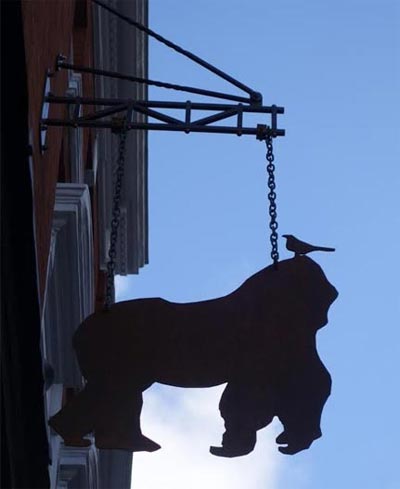 I've been living under a large rock - what is it?

Not only is this the first opening by Russell Norman (Polpo, Spuntino, Mishkins) for well over a year, but it's also his first pub. Formerly the Marquis of Granby it's now a three-floored gastro palace complete with dive bar in the basement and airy dining room on the first floor.

So where is it again?

Slap bang in the middle of the West End, the Ape and Bird is on Cambridge Circus at the intersection of Shaftesbury Avenue and Charing Cross Road - right across from the Palace Theatre (where The Commitments is currently showing). Essentially, it's in London tourist central and it's a huge place, stretching down West Street into the new extension.

We popped in for a Saturday lunch during the previews and the place was packed with a variety of groups of friends, couples and families. According to Russell the place was also mobbed on Friday night, which also happened to be payday (and he was quite astonished at the amount of beer Londoners managed to drink on the last payday before Christmas).

A decent pub is surprisingly hard to find in this part of the West End, so we think the drinking part at the back is going to be really popular around here. We'll certainly be paying that a few visits.

If it's that big, where's the best place to sit?

Depends on what you're after. If you want a bit of banter with the bar folk, sit up at the counter on the ground floor. The upstairs dining room, complete with a huge mural by Soho artist Neil Fox (if you look hard you'll spot Russell in there) looked a bit more sophisticated and grown up while downstairs was very buzzy. We've seen pictures of the room at night time all strewn with fairylights and it looks magical.

So it's pub grub then?

Well, pub grub given the Russell Norman and Richard Beatty treatment. Of course there's a Scotch egg, but executive chef Tom Oldroyd has made it a pig trotter scotch egg and it comes on a bed of celeriac straw fries with fried sage leaves. And the beer on tap includes Camden Brewery and Dark Star, but the crisps are very retro pickled onion Monster Munch and Salt and Vinegar Squares. So pub grub, but not as we've known it.

It probably wouldn't be helpful to say 'everything on the menu' so of the dishes we tried the ones we'd really recommend are the aforementioned scotch egg and the penny bun mushrooms on pureed butternut squash with salsify and roasted garlic. The cheeseburger was even messier than Patty & Bun, if that's possible, but really good - especially when paired with truffle cheesy fries. And even the most committed of sprout-phobics will love the way they're done here, fried up with Old Ford cheese and bacon.

Do try, if you can, to leave room for the desserts. We may have over-ordered just a smidgen which meant that one of us couldn't finish the gooey sticky date pudding. However, when told that Russell's six year old daughter had finished every last bit of her Bannoffeebocker Glory, @hotdinners2 considered the gauntlet well and truly thrown down and did the same.

As it was the previews, not all the dishes were on offer and there's plenty we want to go back and try - not least the crab on toast with sea vegetables which the table next to us had and looked great. And also the goat curd doughnuts with rhubarb which weren't on when we visited, which we'll clearly have to return for.

Can you tell us more about that burger?

Well, we've gone one better. We asked Tom Oldroyd how they prepared it for Ape and Bird. He told us:

"The patty is a 6oz Pure Black Angus ground beef, made from the chuck and rib cap. We started with the patty and once we had that down pat (pun intended) then we looked at what we would want to eat it with (when I say "we", I mean myself, Russell Oxtoby the head chef & Russell Norman).

Then the bun which is a made to fit demi brioche glazed bun. It's slightly sweet, not too heavy and gets the patty into the mouth without obstructing the taste.

We tried probably 10 different cheeses (it had to have cheese on it) from high end blue cheese to low grade cheddar. We even tried a cheese sauce. We ended up using the same cheese they use for cheese strings - but bright orange. I'm not sure it even contains any cheese. You can tear it in a perfect straight line. Its a great taste, melts & clings to the roof of your mouth. Perfect.

You want a crunch to go with all that ooze - iceberg. A Tang to wake up your taste buds and cut through the fat of the burger - so we add diced pickled onions. Then what burger is complete without gherkins? Thinly sliced.

The burger is cooked pink and, well, you saw the result. We basically ended up with a better big mac. But then there's a reason that they have been selling burgers for so long."

We didn't see a cocktail list ourselves but a look on Twitter shows house cocktails including a Martini, Old Fashioned, Americano and Damson Sour. Our Camden pale ale went down a treat as did a little pot (250ml) of Little Eden 12 Australian Pinot Noir (£10).

As befits a pub in Theatreland we confidently predict this show will run and run. A smash hit, in fact. Any tourist wandering in here by chance will hopefully return to their homeland with great tales to tell of the brilliance of British food. But we selfishly hope there aren't too many of them - we rather want to keep this place to ourselves.

Prices were correct at time of writing. Hot Dinners ate as guests of Ape and Bird and visited during the previews.