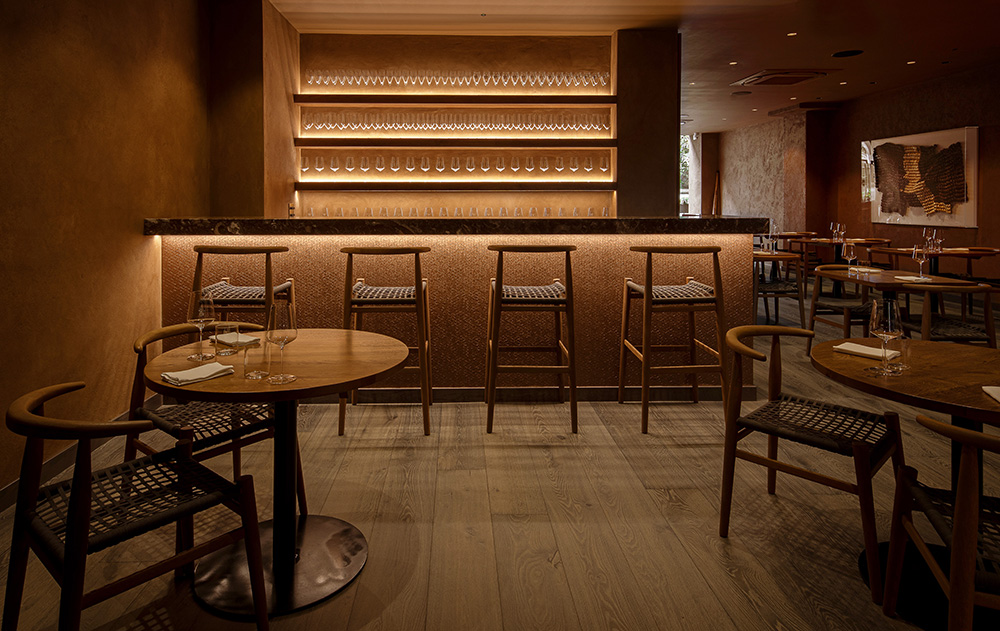 Looking out from the back of the room (we were sat in the table on the right).

What can you tell us about Akoko?

It's the first restaurant from William JM Chilila, who made it to the final of Masterchef: The Professionals in 2018. Before Akoko he's been at The Orrery and Galvin at Windows, and for this venture, he's teaming with Akoko founder Aji Akokomi.

The restaurant is centred around West African cuisine and they say their aim is to "pay homage to the country's culinary heritage by using recipes passed down through generations and traditional cooking techniques of smoking, curing and fermenting". There's a mix of African and British ingredients on show here, alongside a touch of the European approach that Chilila would have used in his previous restaurants.

It's a short walk up Berners Street, in the heart of Fitzrovia (where Il Sud used to be). The restaurant itself is quite beautifully kitted out with a earthen, wooden aesthetic throughout - and an open kitchen towards the back of the room. The best seats are the tables in front of the kitchen, where every so often you'll catch the aromas of their Big Green Egg being opened. There are a few seats in front of the pass too that are worth a look.

How about a drink first?

While there is a small bar area towards the back of Akoko, it's really there as an overflow in case you're waiting for a table to be free or antibac-ed. But just a few steps down the road is the London Edition hotel, where you can find either the bar at Berners Tavern, or what's probably your best bet, the Lobby Bar. That's where we popped in for a drink - and it just happened to be the bar's first day back after their lockdown. 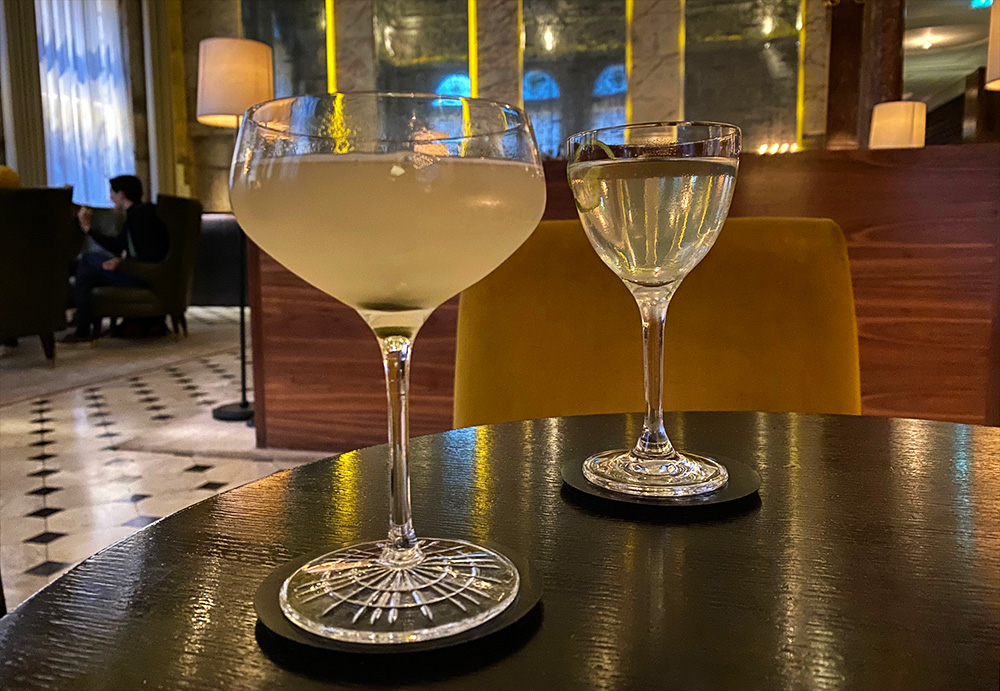 From the Lobby Bar at the nearby Edition - this is (on the left)  Eat, Drink and be Sherry - Grey Goose, Manzanilla Sherry, lemon juice, Angostura bitters and (on the right) their signature Clearer Colada (Coconut-butter washed Havana Club, pineapple cordial).

As mentioned it's all centred around West African cuisine - something that has, albeit quite slowly, had more of a light shone on it over the past few years - with Ikoyi and Chuku being particularly notable. It's perhaps a little lighter on the heat than Ikoyi (we think they could happily ratchet that up a notch here) but otherwise approaches West African cuisine from another unique direction. As ever, if this is a cuisine that you're unfamiliar with, the staff (and the restaurant itself)  are there to help guide you through it - so use their expertise if you have any questions.

it's a tasting menu affair - five courses in the evening (£59), three at lunch (£30), with a vegan version alternative available for each. We'd expect this to evolve over the next few weeks (one of the dishes had already switched out crab for lobster in the first week), but here's what we had on the night. 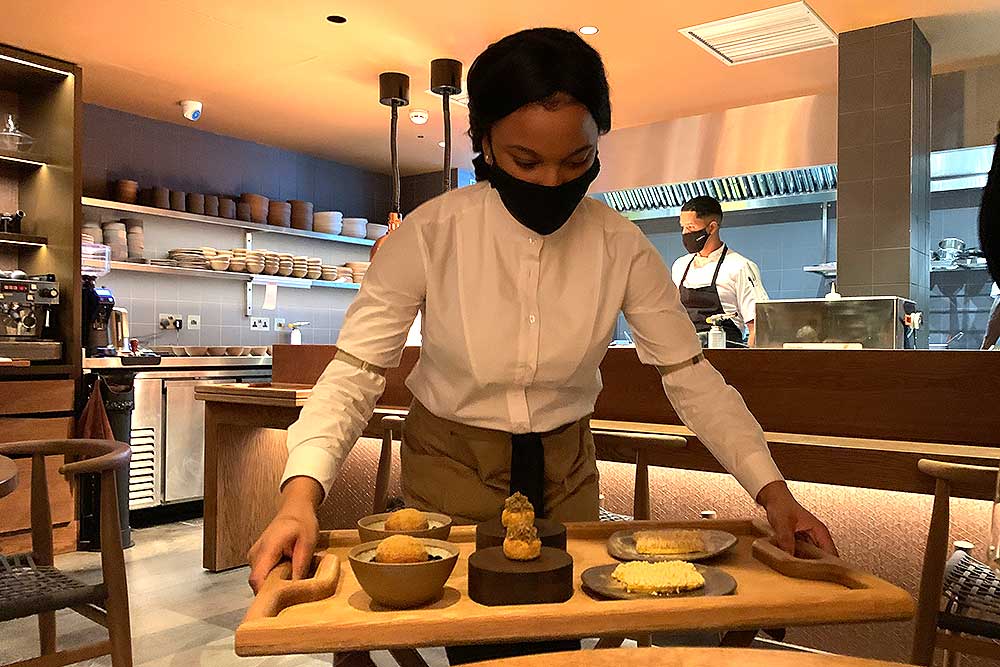 The three snacks arrive at once - everything presented beautifully. 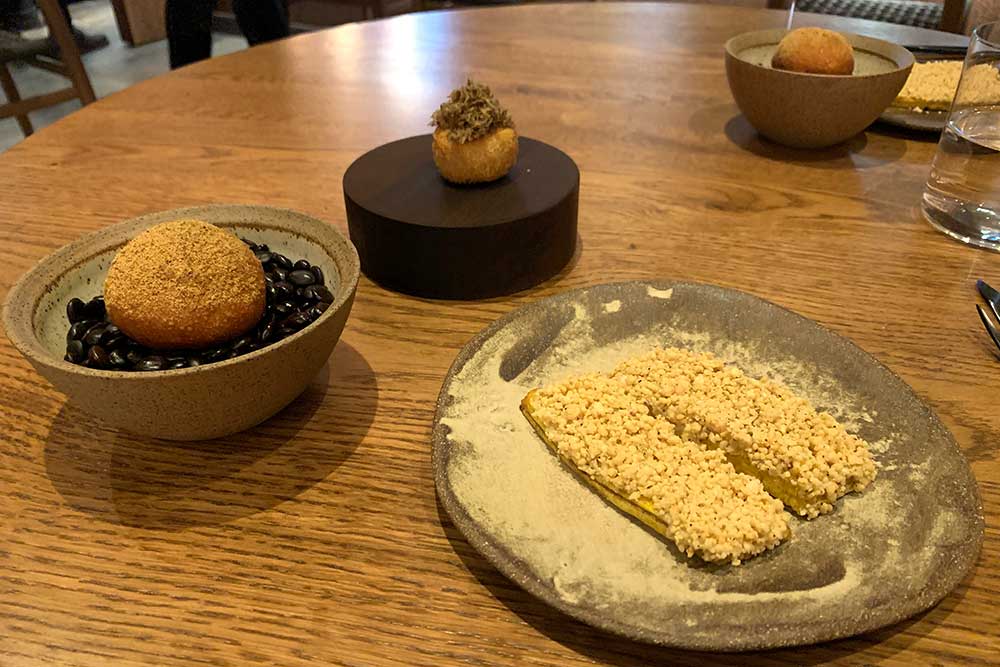 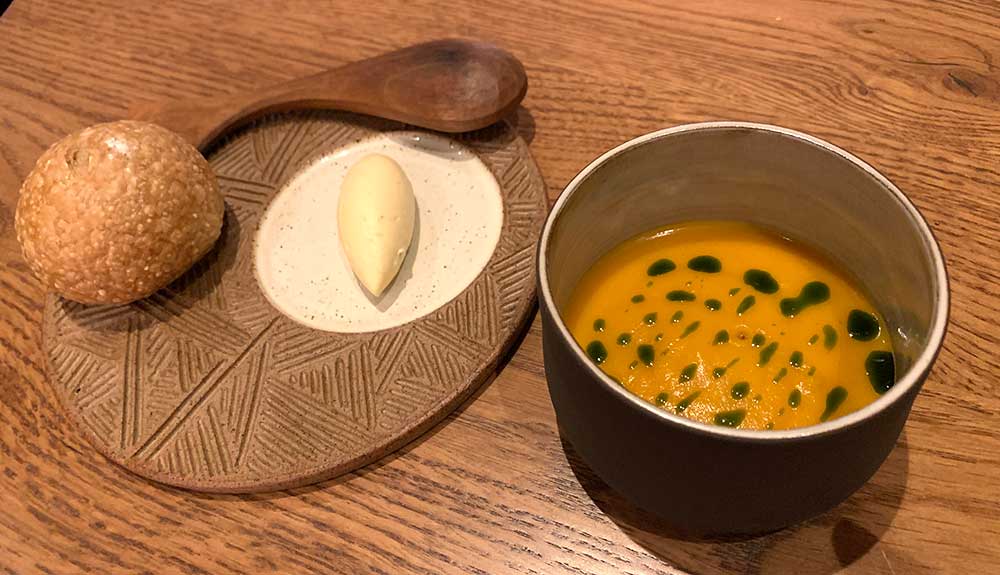 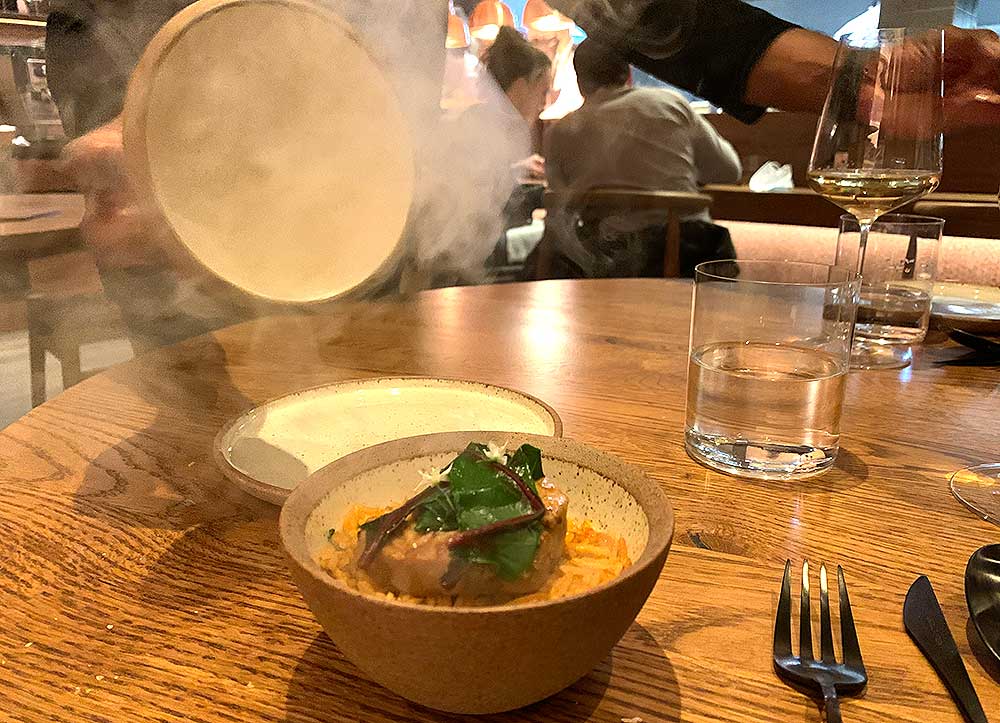 There are elements of theatre throughout - and we do love a good dish unveiling. This is the Smoked Jollof Rice & Goat. 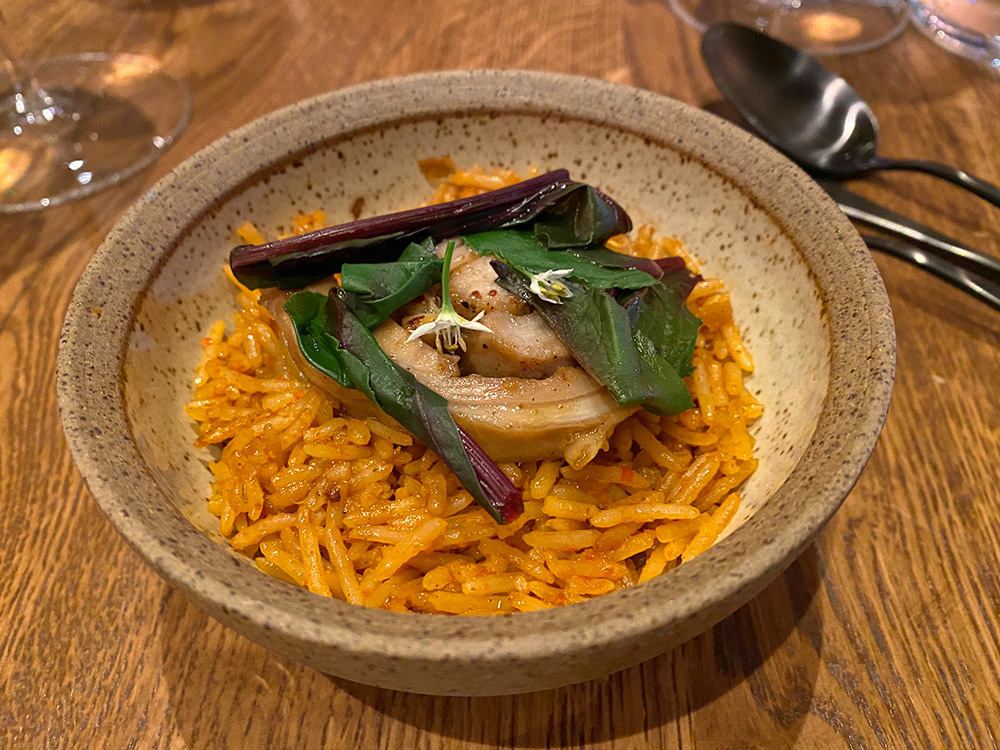 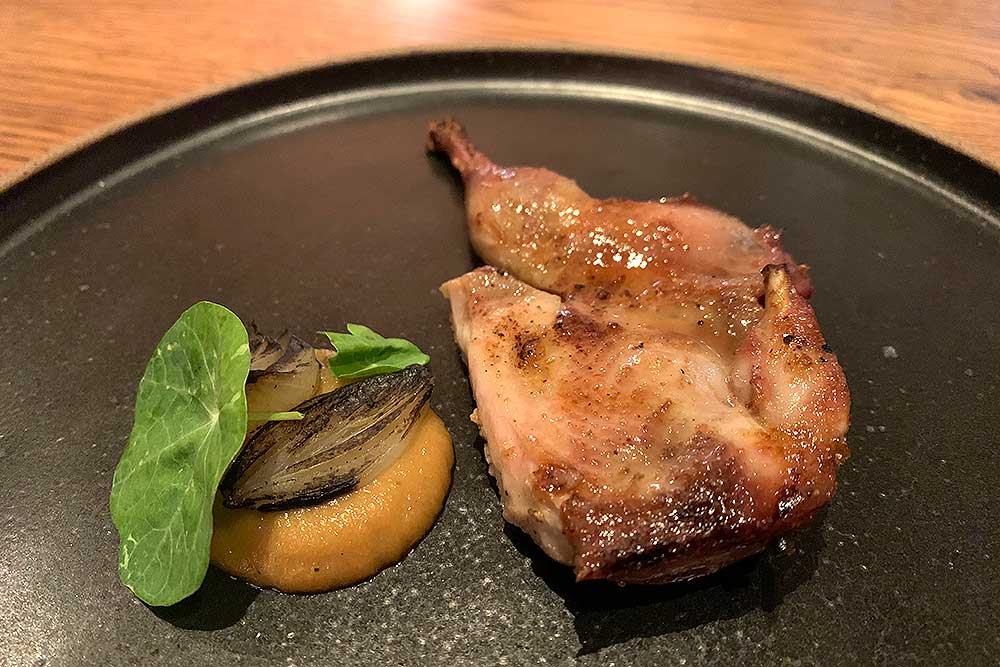 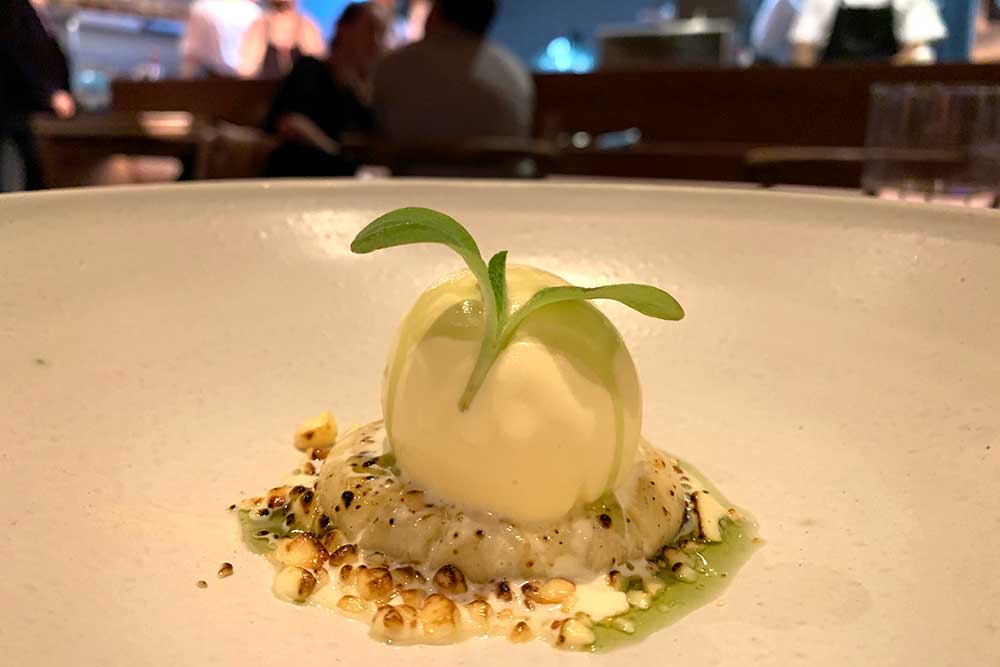 Burnt Uda Cream and Goat Milk Ice Cream (Uda infused cream, Ghanaian cocoa butter, goat milk cream, ehuru and uziza oil). One of those desserts where it all combines into something much more than its parts - the uda cream, in particular, enhances everything here.

And how does the menu change for vegans?

The Veal Cheeks Bofrot becomes Green Pie (Spinach and parsley pastry filled with seasonal vegetables), carrot replaces lobster in the Miyan Taushe, beetroot in for goat in the Jollof and the quali yassa becomes (Aubergine Efo Riro Grilled Aubergine, spinach, marinated ceps, Kani sauce). So you're getting a vegan twist on the same experience.

That's put together by sommelier Honey Spencer (Sager & Wilde, Nuala, Bastarda) and Ania Smelskaya (Silo) with a focus on organic and sustainable wines. The wine list is on the punchy side, starting at £9 a glass/ £45 a bottle. We had the French "Lo Petit Fantet, Ollieux Romanis, Corbieres" (£45)  which was a good pairing with the food throughout.

Alternatively, cocktails are £12, with the Guinness Espresso Martini (Vodka, Guinness reduction, Sherry, Fresh Coffee) standing out and something we'd definitely try on another visit. Star lager from Nigeria is also available, as are beers from Eko Brewery, which usues traditional African brewing techniques and recipes

Akoko has been some time coming (we first wrote about the opening last August) but it's been well worth the wait. From the beautiful interior through to its fresh take on West African cuisine, it's already shaping up to be a winner.

Hot Dinners ate as guests of Akoko. Prices are correct at the time of writing

Where is it? 21 Berners Street, Fitzrovia, London W1T 3LP