[SIGPLUS_EXCEPTION_SOURCE] Image source is expected to be a full URL or a path relative to the image base folder specified in the back-end but /blog/2014/murano/gallery is neither a URL nor a relative path to an existing file or folder.
0
Shares

A very modern take on the Italian: our classic Test Drive of Murano 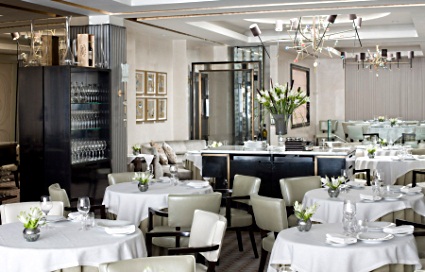 What's the history behind Murano?

Murano is notable for being the place where one of the UK's top chefs Chef Patron Angela Hartnett became her own woman, buying the restaurant out from Gordon Ramsay Holdings and setting up in business for herself. She'd been chef here for two years from 2008, following her time at The Connaught, won a Michelin star a year after opening and owned it a year later. In 2013 she branched out further, opening Cafe Murano in St James.

She is also responsible for Hartnett Holder & Co at the Limewood Hotel in the New Forest and is one of the owners of Merchants Tavern in Shoreditch. But Murano is her base and the place you're most likely to find her in the kitchen.

So why are you trying it now?

Prompted by all the interest shown whenever we run pieces about London's longstanding restaurants we're launching a new section of Test Drives. With so many new openings happening all the time, the timing felt right to shine a light on the restaurants that had made it past the exciting 'new' period and been around, gathering plaudits, stars and regular customers for at least five years.

Right in the heart of Mayfair on Queen Street opposite Little House (where we spied Jack Bauer/Keifer Sutherland having a sneaky ciggy as we left Murano).

Presumably it's a dress up sort of place?

There isn't a dress code, but @hotdinners2 was the only man in there without a jacket (for shame). But while this might be a special occasion sort of place, the friendliness of the staff means it's never starchy or stuffy. There's plenty of buzz, with not a single free table to be seen on a Tuesday night in March.

We didn't spot a duff table in the main restaurant, but if there's a lot of you, the chef's table here is hard to beat. Separated from the dining room only partially with a retractable glass wall, it looks directly on to the kitchen. Eat here and you'll enjoy a special menu created just for you.

What sort of menu options are there?

The set lunch is a steal for food of this calibre with two courses for £25 and three for £30, but we were here to put the à la carte through its paces.

While Murano puts on special menus from time to time, there's no regular tasting menu - you choose how many courses you want from two for £50 up to five for £85 and you can roam around the categories at will. If you really wanted to - and this is Mayfair so you can have anything you want really - you could have five of the starters or five from the desserts section.

And the food? It's Italian, right?

Murano's food ethos is a modern cuisine with an Italian accent, using the best of ingredients whether those happen to be British or Italian or from even further afield. So on our menu there was hand rolled farfalle with Cornish crab, chilli and ginger and a very seasonal warm Jersey Royal and broad bean salad with watercress and citrus mayonnaise.

You'll be glad to hear that in addition to the courses you order, a whole load of lovely things come to your table to get you in the mood for what's to come. So we had delicious cured hams, Parmesan tuiles and piping hot arancini to set the scene.

As menus change all the time, it's probably more useful to focus on some of the best dishes we tried, should you be lucky enough to find them on when you're there. The hand-rolled farfalle mentioned above was as good a pasta dish as you're likely to find without hopping on a plane to Italy. And the scallop ceviche made all the other versions of this dish we'd tried recently - many of them very, very good - seem just less, well, shiny by comparison. You're also going to want to save room for the desserts which more than managed to hold their own with what had come before.

We managed four and a half courses each without feeling immensely piggy, sharing one course of a salad of toasted sourdough, wild mushrooms, burrata and spinach.

What about drinks? Pricey stuff, presumably?

As with all things, it depends how you want to order. So you could spend all your money on the food and just £4.50 on a 125ml glass of the house Sicilian white. But that would mean missing out on half the fun of a meal here at Murano, not to mention eschewing the charms of the Assistant Head Sommelier Ali, if you're lucky enough to have her helping you choose.

We left it to her to pair each course with wine. Unlike a lot of other high end restaurants, the wine lists has a distinct focus on natural and organic wines. These can sometimes be hit and miss, as we've discovered elsewhere, but one standout glass for both of us was the IBT Venezia-Giulia "Slatnik" from the second generation of producers at Radikon in Fruili.

With Murano, Hartnett and her team have arrived up on a winning formula of a room which feels special enough for a treat, but welcoming and friendly to serve up a second home for many of the regulars here. If we were Mayfair residents with a hefty bank balance we could easily see ourselves tipping up here every week or so for a few of the courses. As it is, we'll have to settle for coming back slightly less often than that. Maybe we'll be back to try that set lunch after all.

Murano is at 20 Queen Street, London, W1J 5PR. Find out more about Murano.

Prices were correct at time of writing. Hot Dinners ate as guests of Murano.