[SIGPLUS_EXCEPTION_SOURCE] Image source is expected to be a full URL or a path relative to the image base folder specified in the back-end but /blog/2014/kurobuta/gallery is neither a URL nor a relative path to an existing file or folder.
0
Shares 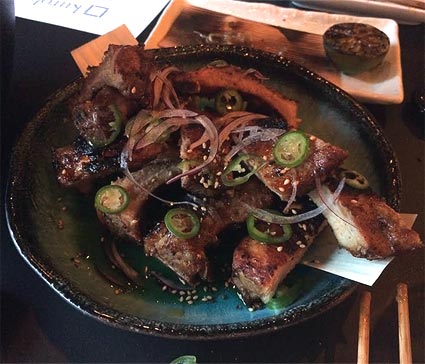 What can you tell us about Kurobuta?

Kurobuta has taken a somewhat roundabout way of making it to its opening date. Originally announced in April last year, the journey to opening the restaurant has been a longer one than expected. Since the original announcement, they've already opened a "pop-up" on the King's Road before they've even opened the main restaurant. That was a huge success, so much so that it's staying open indefinitely.

One thing the pop-up has done is to build up a huge Kurobuta fanbase  - which means that the main restaurant is a success almost before the doors have opened. It's certainly a novel way of opening and a path we'll be expecting other restaurants to follow, seeing as how much of a success it's been for Kurobuta.

So what kind of food can I expect?

The man behind Kurobuta is Scott Hallsworth, who's previously been at Nobu and more recently impressed us at the now closed Wabi. Here, he's going for a more casual diner, with a menu that  focuses on "Japanese classics with a contemporary and sometimes Western, twist."

It's in what is now being called Connaught Village - a little west of Edgware Road. The nearest tube stop is Marble Arch.

There's a strong cocktail list here, so you can come here first but as it's likely to be busy, expect space to be at a premium. We ended up having a fine glass of wine outside the Duke of Kendal pub, opposite. If you cross over to the other side of Edgware Road, we'd definitely recommend a drink in either Vinoteca or Lockhart.

We much preferred the area to the right of the door as you come in - it seemed to be spaced out more there. If you're dining on pairs, we think the raised tables with stools looked like a good bet here too. The restaurant has been designed by new company Salon Edesia and modelled after Japanese izakayas.

A this point it's worth mentioning to keep an eye on how much you're ordering, as the bill can escalate quite quickly. Kurobuta could not be considered a cheap restaurant, but when you're looking for high quality Japanese food you'll have to pay something of a premium in order to get the best. Bear that in mind when you start working through the menu. That aside, we felt we could happily order everything from the list - impressive given how extensive the menu is. We think it's a special occasion place from a food perspective - but one which is much more laid back and buzzier than much in central London.

So it's very easy to get carried away by the menu (you can see the one we had in the gallery below). We'd still recommend going for as much as your budget will allow though, as we thought the food was excellent throughout. Particular standouts were:

But besides that - everything we had was excellent. Also worth pointing out is the dessert of Yorkshire Rhubarb (£8.50) which was rhubarb in all forms imaginable and one of the best desserts we've had all year as a result.

Wine starts at the £6.50 a glass, £27 a bottle price point for a South African Sauvignon, but we went with an excellent Gewurztraminer from Chile at £32 a bottle which we thought was a perfect match for the entire menu. There are plenty of beers and sakes on the menu too and the cocktails are around the £8.50 - £9 mark.

It's been a long time coming, but we left suitably impressed by Kurobuta. The menu is crammed with things you'd want to order (we'd happily go back to hoover up more) and the expertise in the kitchen really shines through. The bill can mount up but keep an eye on your ordering (once you order, you'll definitely be tempted to have just... one... more... dish) and we think you'll have a great time.

Prices were correct at time of writing. Hot Dinners ate as guests of Kurobuta.