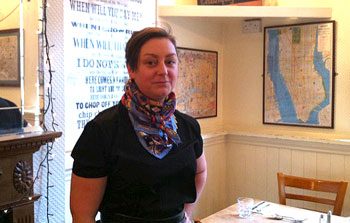 As if having the marvellous Bistrot Bruno Loubet wasn’t enough of a draw, the Zetter Hotel in Clerkenwell is adding a destination cocktail bar when it opens its Georgian-style annexe next year.

Hot Dinners sat down with the owner of the award-winning bar 69 Colebrooke Row, Camille Hobby-Limon, to find out what she and cocktail maestro Tony Conigliaro have planned for the bar they're launching and running for Zetter owner Mark Sainsbury.

ZTH, short for Zetter Town House, will cover the ground floor of two Georgian buildings which are currently being converted into an 11-room, two suite boutique hotel alongside the Zetter and opening on to St John's Square. There’ll be no reception desk – guests will walk straight into the bar which is open all day.

As Camille explains: ‘Russell Sage [the designer responsible for Gordon Ramsay’s York & Albany] is doing the interiors – the colour palette will be the teals and cranberries from old illustrations. The idea is that you’re staying in someone’s home. In our heads we’ve come up with a character Aunt Wilhelmina whose house it is – she’s travelled the world and collected stuff from Argentina, Japan and Europe – she’s a bit of a dotty old aunt. It’s not going to be stuffy – it’ll be fun. If people want to dance on the tables they can.’

The cocktail list will be short and sweet with 12 drinks, as with Colebrooke Row, but Tony has drawn inspiration from the Georgian theme coming up with such concoctions as the Master of Arms with a port reduction and rum and with shipping knots tied around the base of the glass.

‘All the cordials and bitters will be made on site. The bar’s open from breakfast onwards, so there will be quiet moments when the barman will be making up tinctures and stuff on the bar.’

As for food, it’s only natural that Bruno Loubet should be in charge of the bar menu. ‘The idea being that it’s not going to detract from Bistrot Bruno across the road – it’s definitely going to be more of a club menu. There’ll be charcuterie and patés and that sort of thing. We’re also hoping there’s going to be kedgeree and Omelette Arnold Bennett – the kind of brunchy thing you’d get in a club.’ This will be the second time Tony and Bruno have worked together – Tony ran the bar at Isola when Bruno was in charge there back in 2001.

Another innovation will be ZTH’s take on afternoon tea. ‘This won’t be your traditional scones and cucumber sandwiches,’ Camille told us. ‘We’re working on a tea and food pairing with Henrietta Lovell from the Rare Tea Company who did the RAF tea so there’ll be things like pairing Oolong with cheese. And we’re doing some afternoon tea cocktails rather than having champagne.’

So does this new venture mark the start of an empire for Camille and Tony? ‘We’d like to have another place – so this has been a great stepping stone,’ she says. ‘ We can’t afford to just jump into the West End and we’ve never had backers – we did 69 Colebrooke Row on our own. So hopefully someone will come up with wodge of cash and say away you go with that!’

ZTH is expected to open in the first week of April 2011.