Zetter Townhouse and Connaught bar are Best In World 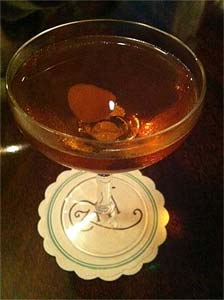 Hooray for London. Not only are we a frankly amazing Olympic city - we're also home to some of the best cocktail bars in the world. But don't take our word for it - we stormed the Spirited Awards in America last night. London bars and bartenders picked up six awards in total. The awards are the culmination of the annual Tales of the Cocktail festival held in New Orleans, now in its tenth year.

Two of the biggest awards of the night went to London. World's Best New Cocktail Bar went to the ZTH bar at the Zetter Townhouse with Tony Conigliaro at the helm. And the World's Best Cocktail Bar gong went to The Connaught which beat out nine other finalists to scoop that award, including two other London bars - Nightjar and Callooh Callay.