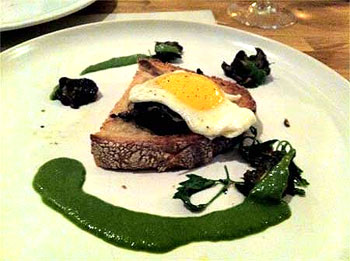 It's always nice feeling you're at the cutting edge of where the London dining scene is going, and this week's Young Turks dinners held at Nuno Mendes' Loft Project in Hackney was the very example of that.

James Lowe, who recently left his job as Head Chef at St John Bread and Kitchen to go it alone and Isaac McHale who's worked at both Noma and The Ledbury and last summer ran the Elliot's in the Park pop-up at Victoria Park were in the kitchen, while Chris and Dan from the Clove Club were front of house.

The evening broke from the usual Loft Project tradition, splitting the one long table into two as well as (handily for us) halving the usual price of £125 to a more pocket-pleasing £60.

It's always a lottery as to who'll you get to sit next to at these things, but luckily for Hot Dinners our table companions were gastro-adventurers Wolfgang and Florian from Hamburg. Florian was hosting a sous-vide hacking event the following night in London - check out his blog to find out more about his gastro tours - the next one's in Southern Italy and sounds amazing. 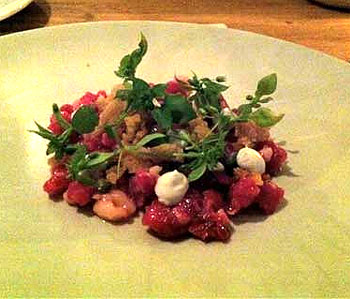 Back to the food, and it was quickly apparent that this meal was going to raise the bar for the year.

Appetisers, served up with Prosecco and rhubarb bellinis, included gem lettuce with curds and anchovies while the six course menu used some of the most ultra seasonal ingredients around - hop shoots, Monk's Beard, the first Jersey Royals and ramson (wild garlic). Given such innovation and flair in the kitchen, it's hard to pick a standout course, but the raw beef rib with chickweed and oyster was seriously good, racking up top scores for taste and playful combinations of texture.

We all agreed this was like the kind of dinner party you'd love to be invited to, where the host is a rich, tasteful friend who's brought together the most interesting guests in the coolest apartment with a well thought out playlist and perfectly paired wines and beers.

The Young Turks used to be three, but Ben Greeno has now decamped to Sydney where he'll be opening David Chang's first venture outside America. As for Ben and James, they're planning a road trip to Manhattan in May, so if you're thinking of heading there yourself, you might want to bear that in mind as they'll be running a series of pop-up events over there.

Meanwhile, keep an eye on their website www.youngturks.co for news of upcoming events in London.