[SIGPLUS_EXCEPTION_SOURCE] Image source is expected to be a full URL or a path relative to the image base folder specified in the back-end but /blog/2015/canonbury/gallery is neither a URL nor a relative path to an existing file or folder.
0
Shares

Young's to completely revamp The Canonbury Tavern in Islington 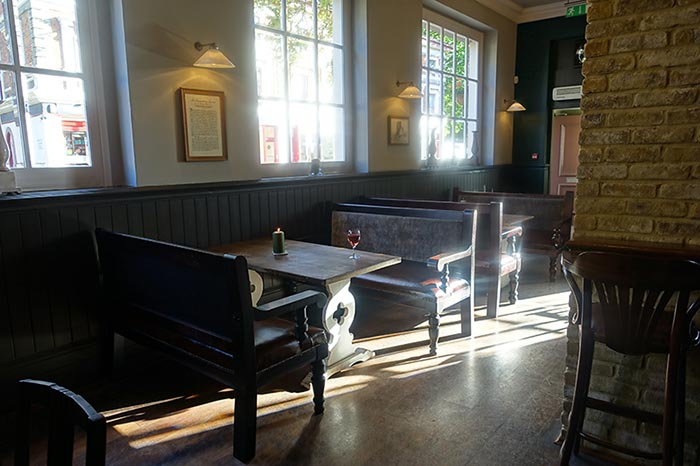 Now this is an announcement that we're VERY pleased about. Last month Oisin Rogers, the very well connected landlord of The Ship (you'll often see him mentioned in Fay Maschler's reviews - he also made our Murphia list last month) left the pub for pastures new. And that's now revealed as heading up Youngs' latest acquisition, The Canonbury.

As locals (@hotdinners2 can actually see the pub from his flat) we're extremely exited about this. The Canonbury was rescused from near delapidation a few years back but the renovation never really took advantage of the huge space available - not to mention one of North London's best pub gardens. It's a decent pub but with LOTS of potential.  Rogers has been working closely alongside Harrison Design since March on the design and both pub and kitchens are now being completely overhauled (new fixtures, booths, stripping back to reveal the original building and a revamped garden).

A wee bit of history - turns out The Canonbury has traded on this spot since at least 1750, once having a four acre garden boasting skittles, Dutch-pin and trap-ball grounds, (whatever they were). George Orwell wrote part of 1984 whilst keeping an eye on his young son playing in the garden during the 40s.

Having tracked Oisin down this morning for more info, we now know you can expect to see some great British food on the menu such as a new take on the pork belly and the scotch egg that The Ship has long been famous for as well as Osh's signature (not to mention famously generous) Sunday lunch. On top of this you'll find the Young's burger and the fresh cod and chips previously extolled by blogger Dino Johannides as one of the best in London. Other dishes may include miso-cured beef rump with radish and burnt onion, seared scallops with chorizo and confit potatoes and, for dessert, summer berries, peach and Prosecco sorbet.

"I was initially anxious of opening in North London," Oisin told Hot Dinners, " but, having spotted so many familiar faces on the Victoria Line and on the local streets over the last six weeks or so (I kept claiming I was lost or going to/coming from lunch), my confidence grew. I am delighted that many of the excellent staff from the pub are staying on and I would like to especially thank Gareth Lloyd Jones and Amy Rodway for being so incredibly accommodating and helpful during the transfer."

Update - we've added the menus and a gallery below - and they look very good indeed. Here are some highlights:

The Canonbury relaunches at 7pm on May 22, 2015 at 21 Canonbury Place, London N1 2NS. For more, follow Oisin Rogers on Twitter @mcmoop

Map it - find The Canonbury Tavern on Google Maps.