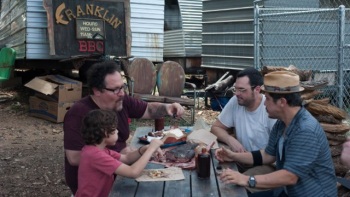 Hot Dinners popped along to a screening of Chef this weekend and caught up with writer/director Jon Favreau afterwards who had some interesting things to say about how chefs view critics.

As a background point, the movie is about a chef - Carl Casper (played by Favreau) who has a very public meltdown on Twitter when he rails against an influential food blogger who calls him out on how his food has turned 'establishment'. The picture here shows a scene in which they visit the BBQ heaven that is Franklin's in Austin trying out some epic brisket. Yes, it's that kind of movie. Go and take another foodie who can geek out happily with you.

Asked in a Q&A at the end of the movie about how chefs view critics, Favreau said: "I think the frustration they're railing against isn't critics - it's really the internet/blogosphere - the Yelp people who write about the restaurants. That drives the chefs crazy. And then they write them back. I mean I know I'm a public figure. Chefs don't know and then they write the kind of things that get picked up by food blogs and these wars begin."

Later on, we asked him where he was planning to eat in London once his jetlag had cleared.

"Edgar Wright [Director of Spaced and Shaun of the Dead] brought me to The Red Fort the last time I was here, so I'm definitely going to check that out again because you have really good Indian food here. And then I always find out from someone who's driving me or someone I meet where the best place to get Fish and Chips is - the authentic stuff."

"The food scene here has changed so much since I was first here. About 20 years ago you used to have to choose restaurants defensively. Now it seems that you're a world leader. There's much more innovation going on here than in many other European cities - so it's amazing how the roles have been reversed in just a few years."

As for Chef - we really enjoyed this tale of a chef trying to get back to what made him passionate about cooking, using a food truck and his love of great Cubanos in the process. If someone in London doesn't start their own street food trade off the back of this then that is a serious business opportunity missed. In the meantime, look out for new Stoke Newington venture One Two Five which is promising Cuban sandwiches on its menu when it opens later this summer.