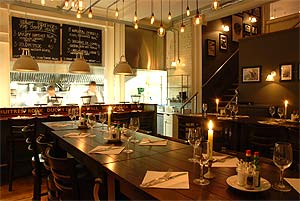 We'll have to admit, until we went to Wright Bros Soho last week, we thought oysters should be firmly off the menu from May to August because of the old 'No R in the month' rule. Restaurant owner Robin Hancock and manager Jeremie Cometto-Lingenheim took it upon themselves to thoroughly disabuse us of that notion in a most delightful way. Turns out it's actually Britain's native oysters which are verboten during the summer months, due to an old rule introduced to help stocks recover after over-fishing.

But when one type of oyster is on the way out, another is on its way in - in this case Pacific oysters - and so Wright Bros will be hosting two oyster feasts over the summer, which if the one we attended was anything to go by, are worth getting a seat at.

Wright Bros Soho's Executive Chef David Gingell, who was previously at St Alban, Terroirs and The Wolseley, has come up with a celebratory Oyster Feast menu which includes raw Pacific oysters (Maldon rock, Brownsea rock and Speciale de Claire) matched with a glass of Manzanilla sherry, deep fried oysters with tartare sauce, oysters with chorizo and sherry, and finally the rather marvellous Oyster Rarebit, matched with a glass of Picpoul de Pinet. The meal finishes up with a seasonal sorbet from Gelupo. It's a great way to get to know your way round oysters whether you're a novice or all-round bivalve buff.