Worst restaurant customer ever? 'Spoof' comment on The Dairy looks to be the real thing 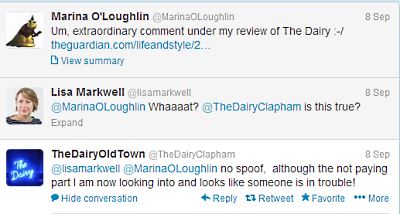 For anyone who missed it over the weekend, one of the most boggling London restaurant stories in recent times emerged, following a comment posted in reaction to Guardian critic Marina O'Loughlin's review of the much-vaunted The Dairy in Clapham.

It seems Guardian reader Angeliqiue Murphy enjoyed her food, but took exception to the way her little boy was treated at the South London restaurant. In what to all intents and purposes reads like a perfect troll post, Angelique complains that she and her two friends (and her little boy) were enjoying a celebratory meal and "had quite a few bottles of wine between three of of us."

The first misstep on The Dairy's part apparently came when Angelique "ordered a vegetable dish for [her son] and asked for it to be pureed, which they refused to do. I had to smash it up myself with a fork."

From here it went from bad to worse with staff "refusing to keep an eye on him for only two minutes while we went outside for a cigarette between courses".

The denouement came when the well refreshed group of diners ordered three brandies which it seems staff were reluctant to supply. Angelique "practically had to insist" and to make matters worse "my son was getting agitated, crying etc, he does this when he is hungry, so I began to breastfeed him. The manageress came back with our brandies and just looked at me, disgusted. I was furious, how could another woman try to make me feel ashamed about doing something natural? This basically turned into a stand-up argument between me and this woman who is obviously jealous for some reason. Ultimately they refused to serve me a brandy, my friend shared theirs with me and we left, out of protest we refused to pay."

After many on Twitter presumed the whole thing was an elaborate prank, The Dairy tweeted that it was "no spoof, although the not paying part I am now looking into and looks like someone is in trouble!" The restaurant declined to comment further on the story, but as you might imagine, the comments on the Guardian, where it was the fifth most read piece of the weekend, were particularly choice.

"We've all been there, we've all had moments when we fancy getting pissed and having a fag, and the lack of a free childminding service has literally ruined our lives," posted SonoftheDesert. "It's not just misogynist, it's also racist, homophobic, fascistic, communistic and political correctness gone mad."