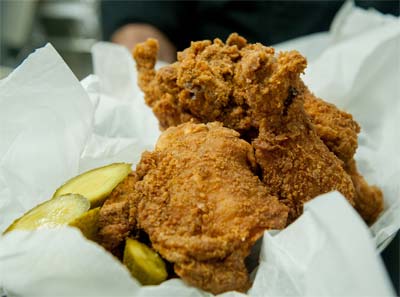 Brixton Market has rapidly become a foodie destination south of the river with Brixton Village housing some of the best food in the area. Soon, it's about to get even better with a new fried chicken emporium.

The brainchild of William Leigh (aka @theboydonefood) and Scott Collins (of Meat Liquor and Meat Market), Wishbone is aiming to reinvent chicken in the same way Meat Liquor got us all fired up about burgers. We caught up with William to find out more...

Can you tell us what to expect from Wishbone?

Chicken seems to be the big London trend at the moment - what will make Wishbone stand out?

There are people doing rotisserie chicken and grilled chicken in London – but these aren’t new things – Nandos and Rotisserie Jules have been around forever; in New York and LA it’s all about fried chicken.

We've worked hard on a menu that makes chicken the hero and we’ve spent a long time getting the food just right – the fried chicken had to be as perfect as we could get it. It’s been mistreated in countless different places with soggy, greasy crusts, inferior chicken and badly balanced sides.

We tried ours out on a few fast food gurus - Yianni Papoutsis of MeatLiquor said “It's what I've always wanted fried chicken to taste like” which, for me, was about as high an accolade as you can get. We might even be doing a fried chicken breakfast on Saturday mornings…

What drinks will you serve?

Giles, the genius behind SoulShakers, will be working on our bar with us; Hobo Beer will be making an appearance (a new Czech craft lager made with 100% Saaz hops) alongside a few others and I imagine you’ll see a cider or two. Something short and sharp will be rearing its head as well.

How many will you fit into the restaurant and will you be doing takeaway?

We’re looking at around 40 covers upstairs (with a small bar area) serving the full but concise menu. Downstairs it’ll be vertical drinking and finger food (a lot of wings) for around 25 people. Brixton lends itself to the mix – a lot of people like grazing there at the weekend, so a plate of wings is perfect for a quick bite. Takeaway we’re currently investigating – our kitchen is tiny!

And finally, will this be a permanent restaurant?

Very much so. Bricks and mortar and Brixton Market’s brilliant wonky walls. I’ve been incubating the idea for about four years and Scott and I have worked on this for a year together - a lot of time and effort (and plenty of chicken) have gone into the restaurant; we’ve both travelled extensively eating variations of fried chicken everywhere from Queen’s Park to Melbourne – all in the name of research to get Wishbone off, if you’ll excuse the pun, to a flying start.

Wishbone opens on 13 November 2012 in Brixton Market and you can follow them on twitter. Photo by Thomas Bowles.