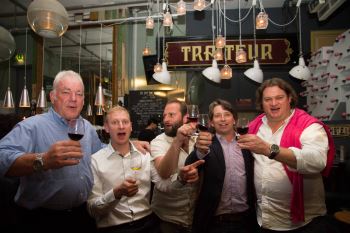 It's no secret that Hot Dinners appreciate a lot a bit of wine when dining out, so we're pleased to see that Tom Harrow, aka Winechap has announced the launch of 'The Contemplation List' at Brunswick House. This new experience gives diners a chance to enjoy an esoteric range of rare and sought after wines. The idea behind the list is to allow guests to relax and take their time whilst they enjoy their wine of choice in the unpretentious surroundings of Brunswick House in Vauxhall.

Guests at the restaurant, which has recently had a quick reshuffle to open the bar and dining area, will be presented with a traditional leather-bound cellar book. The hand-written tome contains an impressive but ever-changing line up of rare, ready to drink fine wines (sourced from a private client's surplus stocks). The wines are sold at very low mark ups, with transparent cash margins added - a practice that regulars at the 10 Cases and Bob Bob Ricard will be familiar with. Each bottle is served with a complimentary cheese board or charcuterie platter, designed to encourage guests to sit back, settle in and enjoy their tipple.

Hot Dinners were given a sneak peek at the list and spotted a few which we're already thinking about getting a few friends together for. The wines are selected from both Old and New world producers including familiar names such as French legends Chateau Lafite, Australian dynasty D'Arenberg and Californian upstarts Ridge Vineyards.

Tom and his team have become well known in the capital for their ability to seamlessly bring together exciting food and wine experiences. The most recent of these events, the Winechap 'Wine Safari' dinner was held at Brunswick house last week. The sponsored by the newly formed PIWOSA (Premium Independent Wineries of South Africa) featured four South African winemakers showcasing their impressive range of wines, many of which would certainly have stern supporters of old world wines second guessing themselves. Guests were guided through each flight of wines by Tom and the winemakers, accompanied by seasonal sharing dishes designed by Chef James Lowe. The winemakers - Paul Cluver, Bruwer Raats, Rollo Gabb and Ken Forrester - were equally as lively as their wines, and held the audience's attention in spite of Tom who insisted on wearing a full safari outfit for the entirety of the night.

The Contemplation Wine list is available from the end of June at Brunswick House, 30 Wandsworth Road, London, SW8 2LG

To find out more about Winechap and to sign up for upcoming events visit winechap.com.