We're back with our semi-regular stuff we liked - a round up of the things we've been talking about on Twitter, Instagram, facebook and more. This week there's Propercorn, Champagne from Aldi and a really great wine cooler...

First up - we were sent this lovely bottle of Champagne from Aldi - who are getting something of a name for themselves with their wine section. It was in honour of Champagne Day (not that we need an excuse). Their Monsigny Champagne tops many a taste test and is still under £12 in-store.

Apparently it's #champagneday today. Trying this one later from @aldiuk

Next up is more wine - this time from Vinoteca, who have just started producing their own-brand riesling. The the 2014 Rodney and the Horse Clare Valley Riesling is now available in all Vinotecas at £29.45 to have there or £13.95 to take away.

Weekend plans looking up - thanks @vinoteca! (this is their first own-label wine - in branches now) pic.twitter.com/qqy1Q6E5QO

And all that wine and champagne means we get a chance to try out the Vinnebago - from the people behind Corkisicle. This promises to keep white wine at fridge temperature for 24 hours and even mulled wine at... mulled wine temperature - for 12 hours. 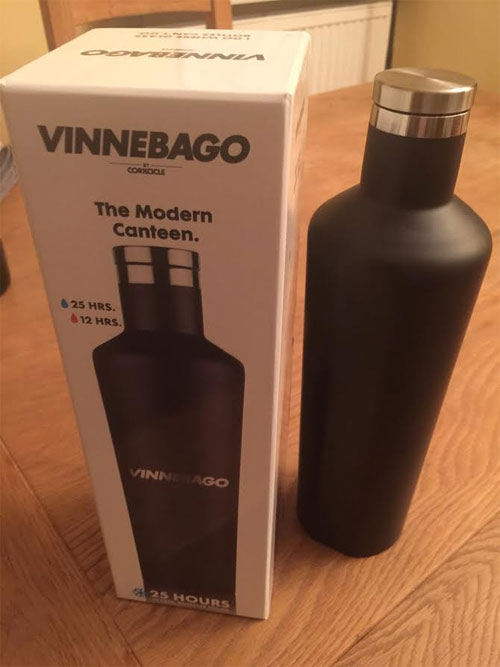 We really loved our meal at Sky Gyngell's Spring at Somerset House and were particularly wowed by the room - keep an eye out for our Test Drive in the next Hot Dinners newsletter.

Ooh, pretty. One of the dining rooms at Spring pic.twitter.com/TbRoFepydY

We're big fans of Propercorn (it's often invaluable if you ever put yourself on the 5:2 diet) so we were most than happy to get a whole box of one of their new flavours through the post.

Thanks @propercorn for the goodies. Love the little cactus too. pic.twitter.com/2qkFF0QOvm

And finally, while it's been over a week since the OFM Awards, it's still worth pointing out that they alway do the most impressive food goodie bag ever seen...

Going to start working my way through the OFM Awards goodybag. Happy Friday everyone!!