Westminster Council plan to crack down on London's restaurant queues 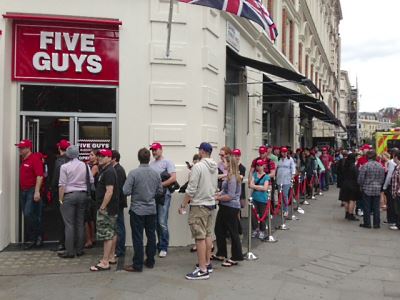 There's been much talk about London restaurants, no bookings and queues over the past week or so - particularly responding to articles in both the Guardian and The Times. But that may all be coming to an end with the news that Westminster Council has been discussing ways to curb the trend.

Complaints from residents, shops and even other restaurants have made their way to the council's all-important Licensing Sub-Committee. They'll be convening this morning to look at whether to create a new license governing queues. The intention is for restaurateurs to be forced to apply for a license from a limited pool before they're allowed to have people queuing for food.

The news will no doubt thrill the vociferous lobby of diners and some newspaper reviewers who hate the idea of not being able to book a table. But it'll come as a shock to the likes of Pitt Cue Co, Patty & Bun and MEATliquor whose businesses have thrived, in part, on the allure of the queue. Hot Dinners tried to get their reaction today, but no-one was available to comment.

Councillor Farad Osilploy, whose proposal this, is told Hot Dinners: "Rowdy queues annoy local residents and create a nuisance for other businesses. I personally can't see why anyone would queue for a restaurant. It's my intention that this licence fee will make restaurateurs think again about the no bookings policy."

Update: 12pm. You guessed it - this was our April's fool. And I think we managed to get a fair few of you this morning.