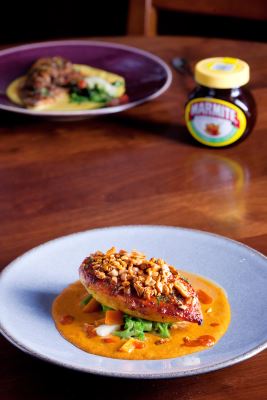 Vivek Singh is already well known for his modern Indian cooking style, mixing Indian spices and flavouring with Western ingredients; now he has turned his hand to that most English of food stuffs – Marmite – to produce the world’s first Marmite-infused curry menu. Hot Dinners popped in to Cinnamon Soho the other week to check out the dishes and find out more.

First off, Marmite-haters need not fear: the opinion-dividing yeast extract is utilised for its umami-rich properties, enhancing the flavour of sauces and glazes rather than just being dolloped over the dishes.

The menu includes a canapé of prawn with a marmite glaze and a fiery chilli kick; sea bream with kokum, Marmite and curry leaf crust and coconut Marmite sauce; chilli and peanut-crusted chicken breast with Marmite korma sauce; and a dessert of Marmite and cardamom chocolate mousse with caramelised bananas.

That familiar tang of marmite was definitely noticeable in all the dishes but never overpowering. The Marmite korma sauce with the chicken worked particularly well, especially when mopped up with the accompanying Marmite, chilli, honey and garlic naan bread.

The Marmite-infused menu is available at Cinnamon Soho priced at £35 per person from now until the end of the February.