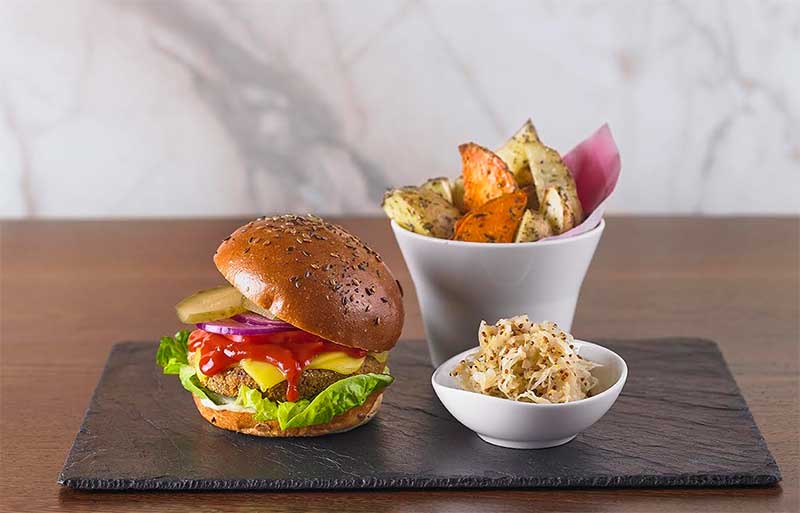 In a nutshell: Vegan food to eat in or takeaway

Vegans are getting loads the good news these days, from the arrival of plant-based eatery Essence in Shoreditch, to KERB's vegan food festival and even the invention of several new, animal product-free doughnuts from Crosstown Doughnuts.

Now there's yet another opening on the horizon. This time, it's Wulf & Lamb down in genteel Sloane Square. And, what's more, their head chef is Franco Casolin, who previously worked at none other than Vanilla Black, which made waves for being one of the first genuinely contemporary vegetarian restaurants in the capital.

On the 100% plant-based menu, there'll be their "Chili'non'Carne" with cashew sour cream, an Ackee Burrito which employes the lychee-like fruit for a creamy twist, and a signature spicy bean burger that they've dubbed the Wulf Burger.

If you're not eating in though, there'll also be all the usual salad bowls, wraps, and sandwiches to go, including a New York Reuben on rye which swaps out the beef for seitan.

They'll open pretty early on weekdays, 7.30am, with a mind to targeting those in need of a quick, conscientious breakfast en route to the office. Expect loads of vegan and gluten-free choices on the early bird menu, plus granolas, and a vegan full English.

Plus, *very* respected vegan bakery Ruby's of London (which the Standard says make "the best vegan cakes in London") will be on hand to keep the counter stocked with their famous sweet treats, including a triple chocolate cupcake and rose pistachio doughnuts - and all miraculously animal free.

When does it open? They're currently running soft openings and should be open officially before 30 September