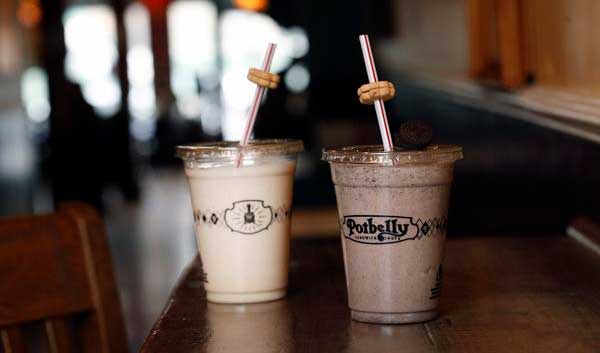 Coming to Westfield Stratford, hard on the heels of another American import Shake Shack, is Pot Belly. It's the first European opening of the hugely popular US sandwich shop, specialising in hot, toasted sandwiches and hand-dipped (aka handmade, rather than machine-dispensed) shakes and smoothies.

The chain was founded in Chicago back in 1977 and named after the potbelly stove store they were first served up in. The signature sarnie is a Wreck - featuring salami, Angus roast beef, turkey, ham and Swiss cheese. Their meatball sarnie is also popular with marinara sauce and provolone cheese. For the healthy minded, there's salads and soups too.

We know they're going to have some secret menu items, but our question is are they going to have the shake outlined in a piece by Thrillist last year - the Cookie Crunch Collision which apparently consists of "Vanilla ice cream + Oreo crumble + shortbread butter cookies + itty-bitty cookie garnishes".

Now to the giveaway. Over the first three days, they'll be giving away 300 sandwiches. To find out how to get yours for free you'll have to head over to www.potbellyuk.com

Potbelly opens mid July 2015 on The Street at Westfield Stratford. Keep up with their news on Twitter @potbellyuk