Written by Catherine Hanly
Created: 08 May 2013 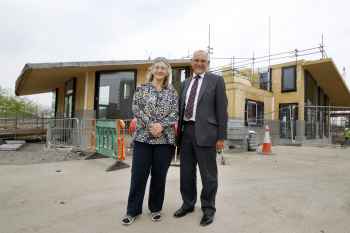 News reaches Hot Dinners of the first food spot to open in the Olympic Park. Unity Kitchen Cafe, one of four permanent cafes and four permanent kiosks across the site will open in July.

The café in the Queen Elizabeth Olympic Park will be operated by the Camden Society, whose Chairman, Gerald Oppenheim said: "The combination of this beautifully designed café and flexible community space will provide a great place to relax and eat and drink with everything from community classes, to yoga sessions, business breakfasts and parties.

"We aim to make the most of the training and employment opportunities which the café will offer to people with disabilities, as it will be an additional venue for in-work training of our apprentices."

Unity Kitchen Café will be in the north of the Park at the newly built Timberlodge and will have space for up to 80 indoor diners and a further 100 at table seating outside.looking out over the meadows and waterways of the River Lea.

Looks like this will be just the first of many announcements for food and drink in the park when it reopens. Apparently there's a spot for a further café close to the bridge to Westfield Stratford City, a floating restaurant on the waterways, a large restaurant or bar on the highest point in the Park, known as the Belvedere and there are also plans for a variety of food festivals, mobile carts and pop up dining experiences.