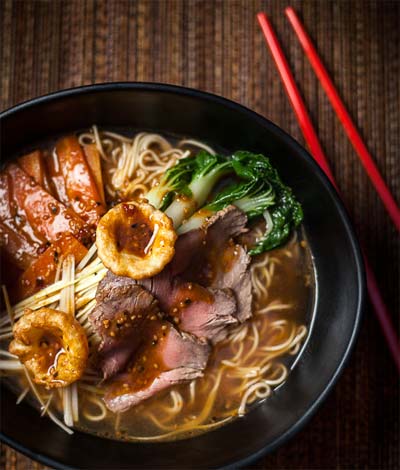 Another popular pop-up is coming to rest later this year as United Ramen finds its home in Upper Street, Islington (taking the place of Strada). The twist for this ramen joint is its mash-ups between traditional ramen and other cuisines. That's been showcased in the recent pop-ups which has had British, Korean or American takes on Ramen (as well as, of course, the traditional Japanese approach).

It all comes from Aaron Resch who got his love of the East Asian cuisine while living there for three years and craving it upon his return to London. He says "with such a rich history, I believe that ramen is a natural platform for cultural mash-ups, which we are excited to explore alongside the classics”,

We caught up with Aaron Resch to find out more:

How would you describe United Ramen?

United Ramen is a traditionally inspired restaurant concept that uses traditional Japanese techniques to create both classic dishes and innovative dishes influenced by other cultures. We love the history of ramen and think that it’s a great platform for cultural mash-ups. The variety of ramen dishes is endless as demonstrated by the thousands of ramen shops in Japan, each with their own secret ingredient.

As an American who grew up in Britain and then lived in Asia for a number of years I wanted to bring ramen to London but make it appealing and accessible to a wider audience while staying true to the traditional-style ramen you would find in Japan. As a result we’ll offer two classic styles of ramen (Shoyu and Miso) alongside, among others, an American and British style of ramen.

Can you give us some planned dishes for the menu at the permanent site?

Absolutely! Our pop-ups have actually been geared towards refining and gaining feedback on the dishes we plan to serve in the restaurant. As mentioned above, we are interested in the history and culture of ramen and want our dishes to reflect this. So far, we’ve tested 6 different pop-up menus representing the following countries: Japan, Korea, China, India, the USA and Great Britain. All of the ramen dishes from these events (with tweaks made according to the really valuable feedback we’ve received) and complementary sides will be on our initial menu. The ramen dishes are:

And what can you tell us about the drinks?

It’s early days still, but we’re planning a fairly compact drinks menu including a selection of beers from the countries representing our ramen, a concise range of cold sake, wine and a variety of soft drinks. We will be serving a range of fresh loose leaf teas and will be offering them hot, cold or as bubble teas with natural sweeteners like honey and palm sugar. Excitingly, we will offer special bubble tea cocktails (aka the Bubble-Tea-Ni) that went down a storm at our “Ramen meets India” night at Tooting Market.

Can you tell us more about the restaurant itself?

Our permanent location is the former Strada site at 105-106 Upper Street. The restaurant seats 70 inside and another 12 outside. We’ll be walk-in only in the true ramen-ya style but guests can put their name down and go for a drink while they wait for their table. We will also offer a take-away service and have spent some time devising a great way to maintain the integrity of our fresh noodles during transport. Additionally, for those with smaller appetites, our lunchtime special offers a smaller ramen bowl with sides. Finally, I think it’s important to encourage kids to try new foods so we will offer all of our main dishes in a smaller portion for them.

And finally - when are you hoping to open?

Assuming the refurbishment runs smoothly we are hoping to open (starting with a soft launch) in late Summer around the beginning of September. Fingers crossed!