Two huge new bars planned for the City, The Happenstance and Haberdashery 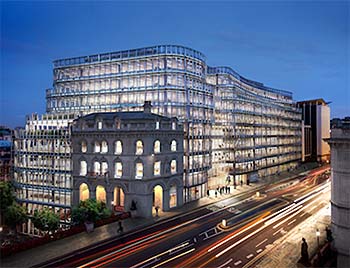 Drake and Morgan, the company behind such city bars as The Parlour and The Folly have announced plans to open two more massive bars in the City next year.

The first is The Happenstance - an 8000 square foot spot at No 1 St Paul's Churchyard. There'll be room for 238 people to eat and drink and an open kitchen, deli, mixology table, florist, bar and private dining room.

Just around the corner at Holborn Viaduct will be The Haberdashery at Sixty London - the larger of the two projects with 10,000 square feet and room for 478 souls. The three-floor bar will also feature a florist, cheese and wine room, deli and kitchen.

The Happenstance is at No.1 St. Paul’s Churchyard; The Haberdashery is at Sixty London, Holborn Viaduct.